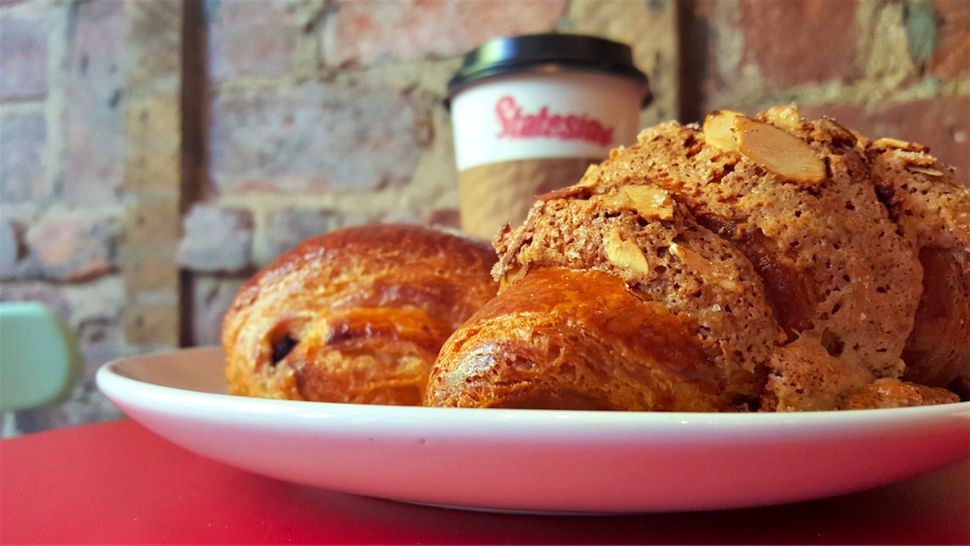 Back in October, , whose owner had just posted an anti-Semitic rant on social media. The café has since closed, and in its place co-owners and native New Yorkers Pierre Gutierrez and Emma-Jean Taylor have opened Stateside Bushwick, a coffee shop just as charming as they are.

The walls are lined with photographs taken by Gutierrez’s Jewish grandfather, who emigrated from Germany to France to New York in the 1940s. The grandfather’s law degree held little weight in the States, so when he arrived, “he picked up a camera and started walking,” Gutierrez told me.

The photos fit well with the 1950s, home-kitchen feel that Taylor says she was going for. The idea came from her mother, who, Taylor told me, owned her own bakery with its own impeccable design.

“Post WWII, there was a feeling in the air of hope that spread into the 1950s. We love this idea of ‘anything is possible,’” Gutierrez said. “It makes us feel like we can do this.”

The menu reflects the owners’ desire to keep it local. Their buttery baked goods come from Balthazar, and they even offer vegan and gluten-free snacks from Champs Bakery, a local favorite for plant-eating Bushwick dwellers. The young owners want to be clear that Stateside is “a very different establishment” from The Bushwick Coffee Shop.

“One of the best things about New York is that it’s always changing, and Bushwick is no exception. We want Stateside to be a place where all of these changes can co-exist,” Pierre said.

I asked them how they felt about the former owner’s instagram post. Taylor responded immediately and resolutely: “We do not agree. At all.” The owners laughed. “Everyone’s entitled to their opinions,” Gutierrez added, “but we have open minds.”

The two young owners — Taylor is 24 and Gutierrez is 32 — seem like the perfect team. Gutierrez brings the business experience while Taylor grew up in a bakery. What’s next for the two of them?

“Emma’s going to teach me how to be a barista,” Gutierrez said, “so hopefully soon she’ll get a day off.” She doesn’t look like she’s been working nonstop since opening. Both owners are very relaxed and excited about future prospects, including plans to someday create all their pastries in-house. Until then, they have a good thing going with Balthazar and Champs.

If you check out Stateside Bushwick, at 203 Wilson Avenue in the heart of Bushwick, make sure to say hi to the team. If the hand-roasted coffee by Variety in Brooklyn doesn’t excite you, the optimism and energy exuding from these two will.

Hadas Margulies is a personal chef, holistic nutritionist and Pilates instructor. Find her at HadasMargulies