How This Chef Heals the World — One Plate at a Time 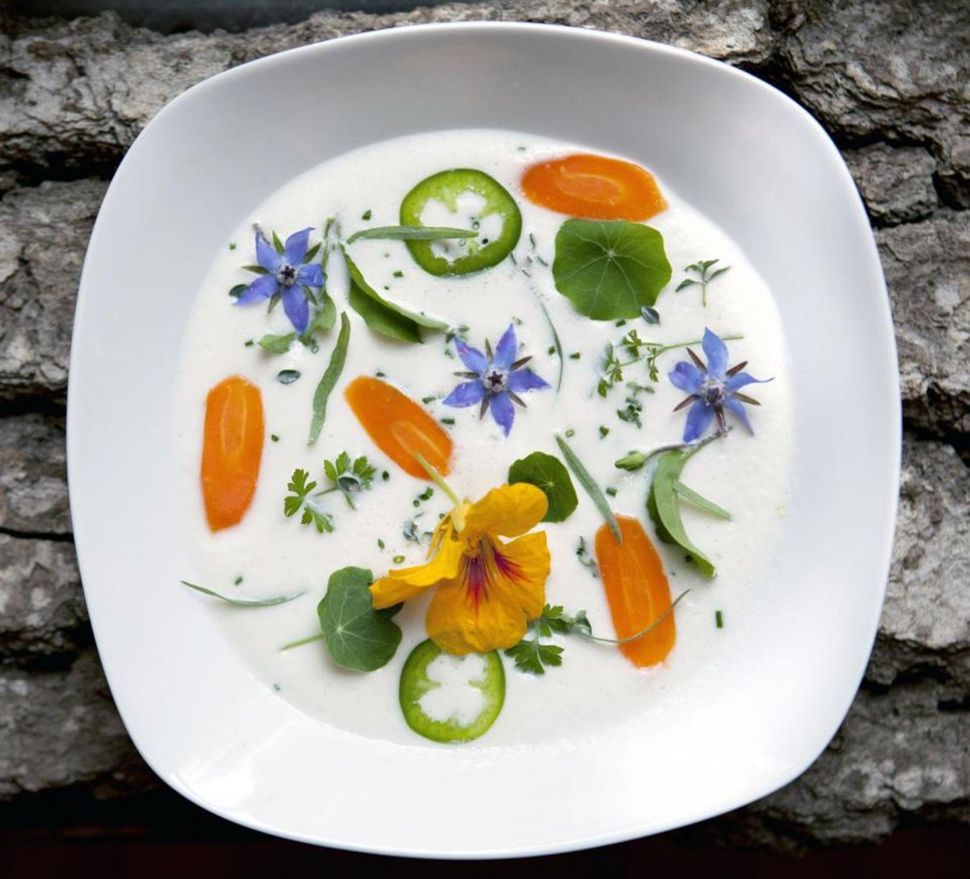 Levi’s soup, like everything he cooks in his restaurant, is made from local ingredients. Image by Jon Levitt 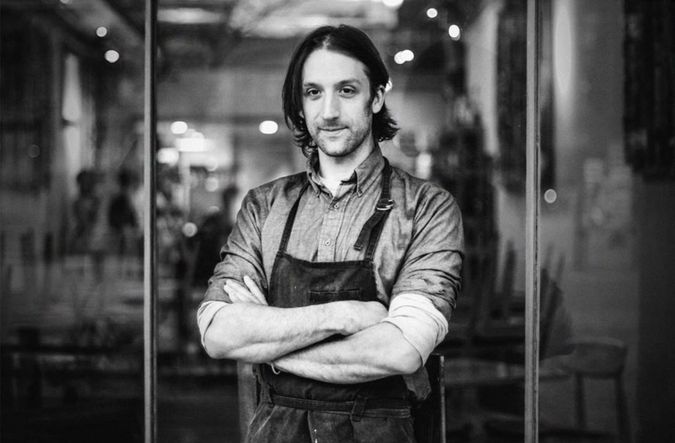 David Levi is a teacher as well as a chef, and, like most teachers, he loves to talk. The other day I sat with him for almost two hours at his restaurant in Portland, Maine, which he opened in January 2014. Vinland’s menu is “Paleo, gluten-free, and 100% local, down to the salt,” he said. Unlike most other restaurants, Vinland offers a consistent vision, a coherent culinary aesthetic and an ethical foundation. I had dinner there with my boyfriend last December. Our meal, a feast, was flat-out delicious and deeply satisfying; I would never have suspected that there was a manifesto behind it if Vinland weren’t already known for it.

At 11:00 on a weekday morning, I sat at a table near Vinland’s window, looking out at Congress Street. I waited while Levi took a delivery of Acadian buckwheat flour and other provisions. When he sat down across from me, I told him how sorry I was that I hadn’t made it to Vinland’s second annual Seder; I was out of town during Passover, both last year and this year. 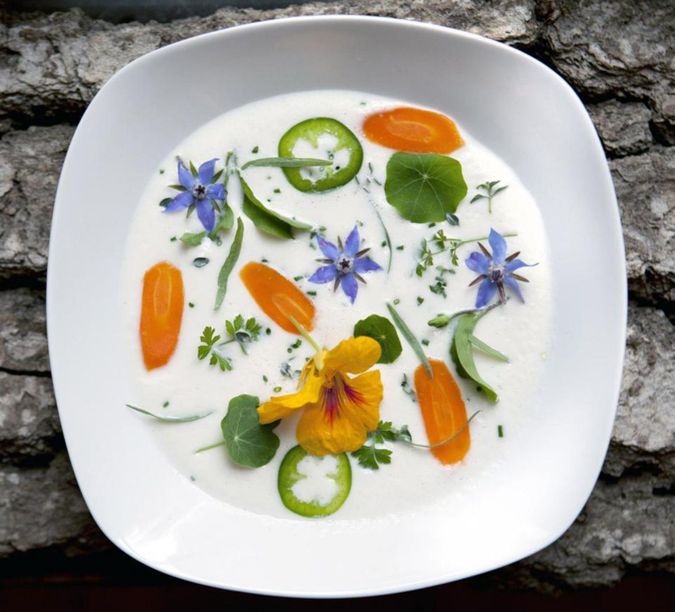 Levi’s soup, like everything he cooks in his restaurant, is made from local ingredients. Image by Jon Levitt

Levi is 36, energetic, thin, earnest and thoughtful, the embodiment of his visionary culinary ideals. When I asked him about his Jewish background, he answered: “Italian Jewish, Sephardic, nominally Reform, converted at birth [his mother isn’t Jewish] and bar mitzvahed. We celebrated Passover.”

His Italian grandfather, he told me, was a wealthy antiques dealer, a Sephardic Jew and a card-carrying Communist in Mussolini’s Italy; he kept kosher. He left Milan in 1939 with his wife and three children (one of whom was Levi’s father), and booked passage on the last boat from the South of France before the war broke out.

Levi was born in New York City. His family moved up to Millerton, New York, in 1982, then back to the city when he was 11. His mother, who had grown up in 1950s America in a non-Jewish household, learned to cook from his father’s mother and sister. She served home-cooked dinners: risotto, gnocchi, parmigiana, polenta. She had a garden. “As I grew up,” Levi went on, “it was second nature to have good ingredients around the house, although I loved Stouffer’s mac and cheese after school. My parents were semi-hippies, in touch with genuine food traditions.”

At Dartmouth, where he studied poetry and literature, Levi cooked simple pastas for his friends, who relished a break from Top Ramen. After he received a Master of Fine Arts in poetry from Bennington, he went back to New York City. He taught high school history for seven years, during which he discovered the art of foraging for mushrooms, both in Prospect Park and up in Maine, in Deer Isle, where his girlfriend at the time was from.

“I had worked in restaurants for years. I did the gamut, from busing to bartending to kitchen work. But they were nothing special foodwise.” One day, a former student showed him a book about El Bulli, the molecular gastronomy restaurant in Barcelona. This former student happened to be the son of Jean-Georges Vongerichten, the famous chef; he was a CIA graduate who had staged (apprenticed) at El Bulli. As Levi looked at photographs of food in the book, his mind was blown. This, he thought, was an amazing and radical approach to cooking: local, wild-caught ingredients. Soon afterward he heard about Noma, the restaurant in Copenhagen, Denmark, that focused on local foods, much of it foraged.

The philosophies behind El Bulli and Noma dovetailed with Levi’s developing ecological and political sensibilities. Food, he believed, should be both nourishing and in tune with the natural environment. “I was a high school history teacher, ambitious forager and home cook in my mid 20s,” he said. “I realized that I could have a more immediate impact on people through food.” With teaching, he explained, it might take years for his lessons in critical thinking to come to fruition. By feeding people, he could see results instantaneously.

Some combination of “chutzpah, hard work and luck” allowed Levi to stage for a summer at Noma, where his ideals were crystallized and realized. Everything he learned there he brought to bear on his own restaurant: “I created Vinland with a clear and compelling mission, making the best food I can, in hopes of reaching more people than I did through teaching.”

Maine is, in many ways, an ideal place for a restaurant like Vinland, for its thriving organic farms, its sustainably caught local seafood, the centuries-old traditions of hunting and foraging. The thin, acidic soil and short growing seasons make the state unprofitable for industrial agriculture; it’s been preserved by its marginal nature, pushed in a positive direction out of a necessity to embrace and preserve old traditions. “There’s more local food in Maine,” Levi said. “Farmers show up at restaurant doors with fresh organic produce. It’s so easy to get.” 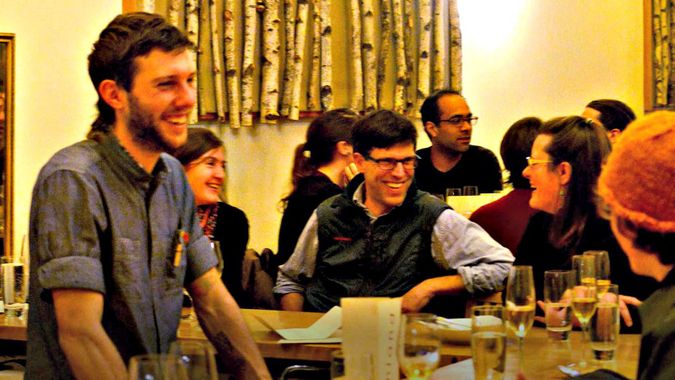 The interior of Vinland.

But even in a restaurant community known for a heavy reliance on local food, Vinland stands out for its consistency: Levi uses no lemons, olive oil or sugar, since those aren’t available locally. And already, a little more than a year after he opened the doors to the dining public, word of Vinland has spread as far as England. The Financial Times of London recently ran an article on “the other Portland,” concluding that “a serious star has emerged in the shape of Vinland, since last January the city’s leading contemporary restaurant, where chef David Levi favours localism, seasonality and foraging. This is the place Portland needed to crystallise its gastronomic ambitions once and for all. Its gold painted stucco ceiling and bentwood Scandi-style chairs create one of the classiest restaurant interiors in the state.”

is the author of six novels including “The Great Man,” which won the PEN/Faulkner award in 2008, and a memoir, “Blue Plate Special: An Autobiography of My Appetites.”

How This Chef Heals the World — One Plate at a Time