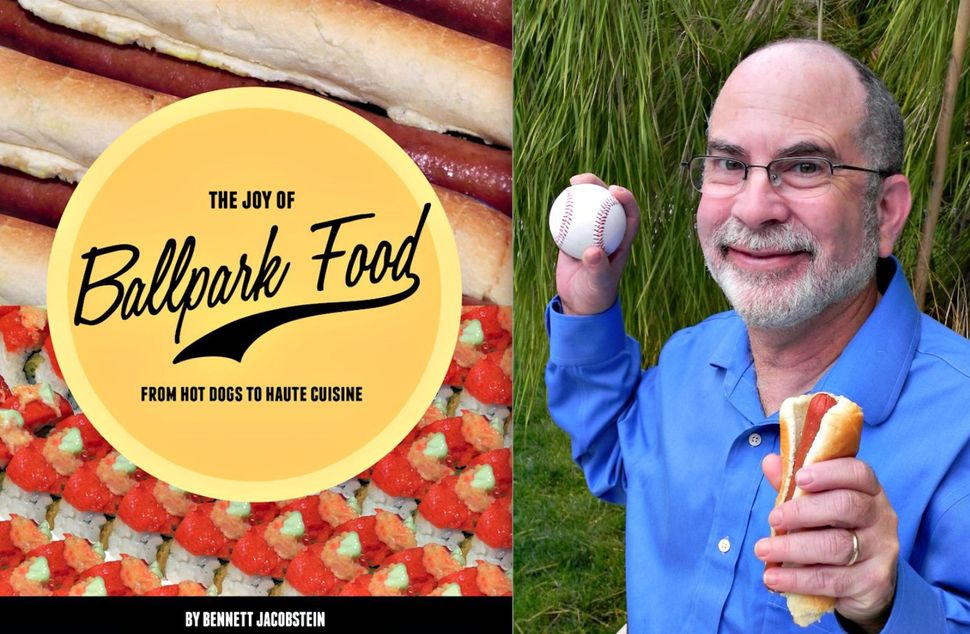 Bennett Jacobstein has a ballpark idea of where you can find great stadium food.

In fact, he wrote the book on it.

“Once I started working at the stadium, I noticed a lot of things online and on TV about ballpark food,” the former computer librarian told the Forward. “I did some research, being a librarian, and found no one had done a thorough history, or an overview of what’s available now.”

So he undertook his own odyssey to arenas around the country, recording what he sampled from each venue. In the book, Jacobstein offers a colorful chronicle of spectator food, meticulous histories of staples like hot dogs and Cracker Jacks and vivid digressions into nouveau ball-game food — think vegetarian sushi, fancy fruit salad and hummus.

Jacobstein dedicates a chapter to kosher options and knishes. “I’m a big knish fan, and most ballparks just offer those Gabila fried knishes,” he said. “But in St. Louis, a local deli called Kohan’s actually baked their own knishes with potato and beef, which I loved.”

Finding kosher food in ballparks is “a matter of economics,” Jacobstein said. “You find kosher stands where you expect them, like big East Coast cities, Florida, Los Angeles.” he said. “If there’s a demand for it, they’ll have it. Boston’s even got a kosher vending machine.”

“The Joy of Ballpark Food” was intended to raise money for Second Harvest, a local food charity. While the book sold a modest 350 copies, it has helped raise more than $1,700 for the food bank. And it’s made Jacobstein a kind of celebrity on the fan circuit. “People find this topic fascinating, for some reason,” he laughed. “The book’s getting much more attention than I ever thought it would.”

To bring the book to life, Jacobstein and his wife Deborah — she’s his official photographer — managed to hit 30 stadiums over a one-year period. “When I retired, we figured it would be a fun thing to do for a year,” Jacobstein, a lifelong baseball fan, said. “Instead of taking a vacation to Europe, we decided to visit all the ballparks.”

Logistics became their biggest challenge, especially because “I wanted to miss as few San Jose Giants games as possible,” he said. The Jacobsteins managed to hit their targets by tackling one region at a time. “We did the Midwest together; the Northeast together,” he said. “The hardest part was finding times when the Yankees, Phillies, Mets and Red Sox were all playing at home the same week.”

Which stadium became his favorite for food? “I like Citi Field the best,” he said. “I love New York deli, which you don’t really get here in the Bay Area. They had a pastrami dog — a Nathan’s hot dog covered with diced pastrami. They even smoke their pastrami on-site.”

Jacobstein also singles out the menus at Camden Yards, Washington, D.C.’s Nationals Park and St. Louis’ Busch Stadium, along with AT&T Park in San Francisco — “but I’m a little prejudiced about that one,” he laughed.

And he couldn’t resist sharing his least favorite stadium-food discovery with the Forward: Rocky Mountain oysters at Coors Field in Colorado. They’re better known as bull testicles. “I thought you could eat anything French-fried,” he recalled. “But the texture was more than I could handle.”