A Swedish-Black Comedian Walks Into a Kosher Kitchen… 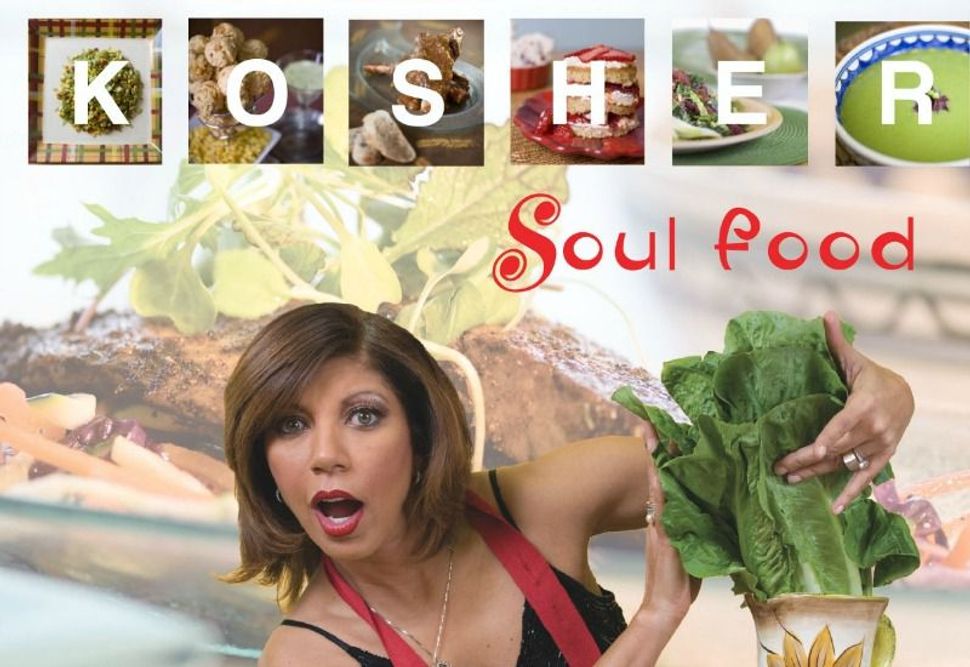 Sunda Croonquist is a Los Angeles-based stand-up comic and former beauty queen, who attended Catholic school before converting to Judaism as an adult. She has just put out a cookbook called “Kosher Soul Food” (Putnam & Smith) with Chef Nir Weinblut (and photographs by Antonio Busiello).

Croonquist (who goes by her first name on the book cover), performs regular gigs at the L.A. comedy club the Laugh Factory, and has a show on the Jewish Life Network called “James and Sunda.” I recently spoke to Sunda, to talk about the new book, which includes such recipes as sweet jalapeño challah, collard greens with crispy pastrami and smothered fried chicken with waffles and grits. An abbreviated version of our conversation follows.

You have an unusual background for a kosher cookbook author. Can you tell our readers a bit about yourself?

I have a Swedish black background (my father is Swedish, my mother is black) and I grew up in Paterson, New Jersey attending Catholic school for 15 years. It was a priest in my last year of university who convinced me I should be Jewish. I had taken a class in comparative religions, and I just had so many questions that he couldn’t answer and he said I should go further to find answers. That wasn’t a new thing; due to my continuous questions in Catholic school, a nun once told me “You should go be with them,” pointing to the school down the street, which happened to be Yavneh Academy.

Do you keep a kosher home?

You have a successful career as a comedian. What made you want to do a cookbook?

I’m just a regular mom who does stand-up comedy. I put my kids before my career. But I happen to love to cook and entertain. During the High Holy Days, my place is the place to go. There are always people who think I’m not so Jewish until they get to the house, and try my matzo ball soup. I’m no Betty Crocker, but my mother-in-law taught me a lot.

When did you learn to cook?

I always helped my grandmother in the kitchen. She was from Georgia and would make all of these dishes, especially with peaches. People from Georgia, they want you to eat, saying things like ‘You have to eat and put some meat on those bones.’ Now I’d like to take some meat off my bones. Most of my friends don’t cook. It’s a fear, but it doesn’t have to be. They’re scared to try and experiment. I hope the recipes in my book are simple enough that anyone can do them.

You collaborated with Chef Nir Weinblut on your book. How did that come about?

We were introduced by a mutual friend. We put on a kosher comedy night, where people who kept kosher could come and enjoy a kosher meal while listening to comedy. It was great. I was performing in front of a lot of strollers and babies. People really enjoyed that show. We would talk about recipes and how to prepare certain things and dreamed of doing a cookbook together, and then it came to life.

Given how much treyf is in Southern food, do you feel that Southern cuisine and the kosher laws are compatible? Was it hard to come up with Southern recipes that are kosher?

I’m a foodie genius. Because I had experience in both worlds, I found a way. For instance, Southern food is full of pork fat and bacon. I make a crispy pastrami (recipe in the book) that I use in the same way you’d use bacon. This is comfort food for me, but it’s both comfort food and it sticks to Jewish law.

What’s your favorite recipe in the book?

I saved my very favorite recipe for the new book, but in this book it’s matzo balls with collard greens.

Cookbooks are often so personal these days. I was hoping to get more of a sense of your comedy in the book, but didn’t really. I got a lot more by finding you on You Tube. Was that deliberate?

Working with this editor at this publisher blocked my comedic flow. I was looking for someone who gets it and understands the dietary laws, and that didn’t happen. I wasn’t aware this was a self-published book until I was deep into it. I’m working on another one that I hope will be a better experience.

The book is dedicated to your mother-in-law, the same one who, with your sister-in-law, tried to sue you some years ago for allegedly spreading false, defamatory and racist lies about them in your comedy. Your husband defended you, and the suit was ultimately tossed out. I guess you’ve patched things up?

Yeah, we patched it up, I sat shiva when she passed away. She was strongly influenced by other members of my husband’s family. Even though it was a very humiliating experience, we were on good terms at the end, and I dedicated the book to her because she was a good cook and would always teach me. Ruth never made me feel stupid for asking her a question about Judaism or about kashrut. I’d had a Reform conversion, but she convinced me to have a Conservative one. She always explained why things should be done a certain way.

Alix Wall is a freelance writer and personal chef in the East Bay and beyond. Her website is TheOrganicEpicure

A Swedish-Black Comedian Walks Into a Kosher Kitchen…