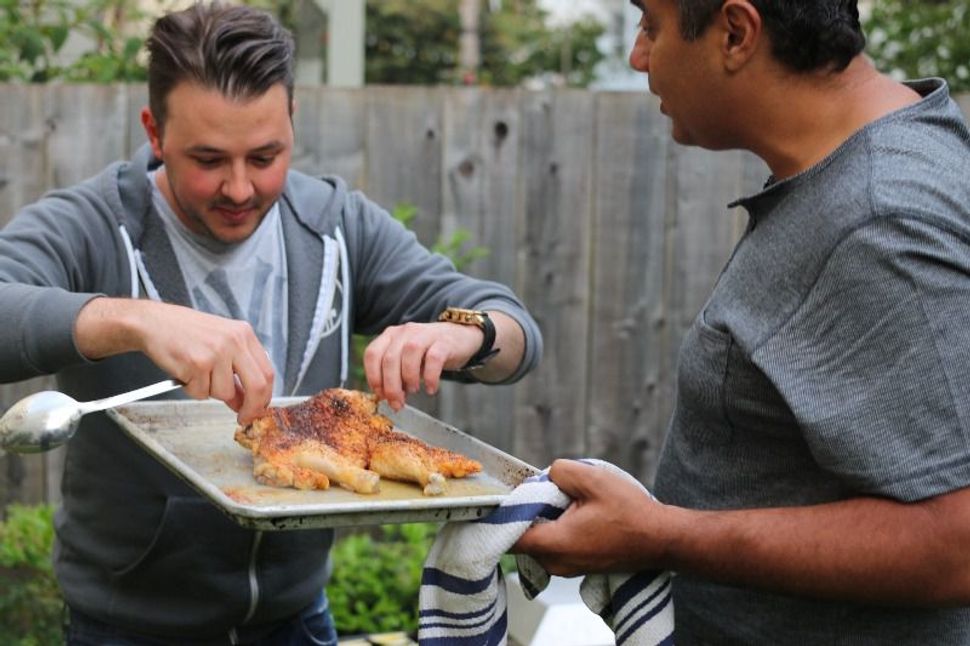 Chef Michael Mina is known for a lot of things — his name is synonymous with fine dining in San Francisco, and his group has 10 restaurants in the Bay Area, plus several in Las Vegas, Washington, D.C. and Florida. One thing he is not known for is offering Goldstar beer. Until now.

The Israeli lager is on the menu at Middle’terranea, a pop-up concept from the Mina Test Kitchen that is serving refined versions of Middle Eastern cuisine for the next few months in San Francisco’s Marina District. Tickets must be bought in advance — a multicourse meal is $45, plus another $30 for a beverage pairing.

Mina, who is of Egyptian descent, has teamed up with Adam Sobel, the executive chef at one of his San Francisco restaurants, RN74, to create a family-style menu reflective of the Middle East. Sobel, who is Jewish and mostly wrote the menu with input from Mina, said he likes to think of it as “Tel Aviv meets San Francisco,” with parts of Greece and Egypt thrown in, but overall it “screams California,” he said.

Sobel was featured in J. in 2013, when he visited Israel on a culinary tour with his Israeli American friend Michael Solomonov, a Philadelphia-based chef, and no doubt some inspiration for the menu came from that trip.

At a media preview last week for the pop-up, both chefs conveyed their excitement over sharing food from their own cultures.

“It’s a real delicate balance of being able to create food that you grew up with and that you are passionate about, but you also want to put where we’ve come as chefs behind it,” Mina said. “We have to improve the techniques as well as the products; it would be unrepresentative of who we are if we didn’t take advantage of the products we have access to.”

While the salad section will change every two weeks or so to reflect what’s in the markets, the menu is a multicourse meal. A starter features salmon cured with zatar, on house-made laffa (flatbread). “Salatim” features three kinds of salads: watercress and cucumbers with halloumi cheese in one, avocado with pickled hot peppers and pickled vegetables in a second and tomatoes with spring onions, tahini and spicy lime dressing in the third.

There will always be a hummus dish. Right now it’s served with fried cauliflower and crispy chicken skin with roasted garlic, dried cherries and marjoram, and a choice of harissa-marinated chicken or Yemenite brisket. An additional fish course option is made “koshary” style (koshary is a popular Egyptian street food of lentils, rice and noodles, something Mina grew up watching his mother make), though this elevated version consists of lentils and rice in a saffron-tomato broth. There are also three vegetable side dishes and a toasted sesame mango tart with frozen Greek yogurt, preserved lime and cardamom honey for dessert.

Sobel said he loves the Middle Eastern way of dining, with a table covered with salads and pickles to start the meal. Their menu is like a culinary roller-coaster, he said, with “really bold flavors. Mediterranean food is a very soulful cuisine. You’re hit with these vibrant, herbaceous flavors one after the other. Your palate is constantly being reset.”

Furthermore, Sobel said, while the health benefits of the vegetable-rich Mediterranean diet have been touted for years, food-conscious Bay Area diners are realizing this way of eating is also better for the planet. 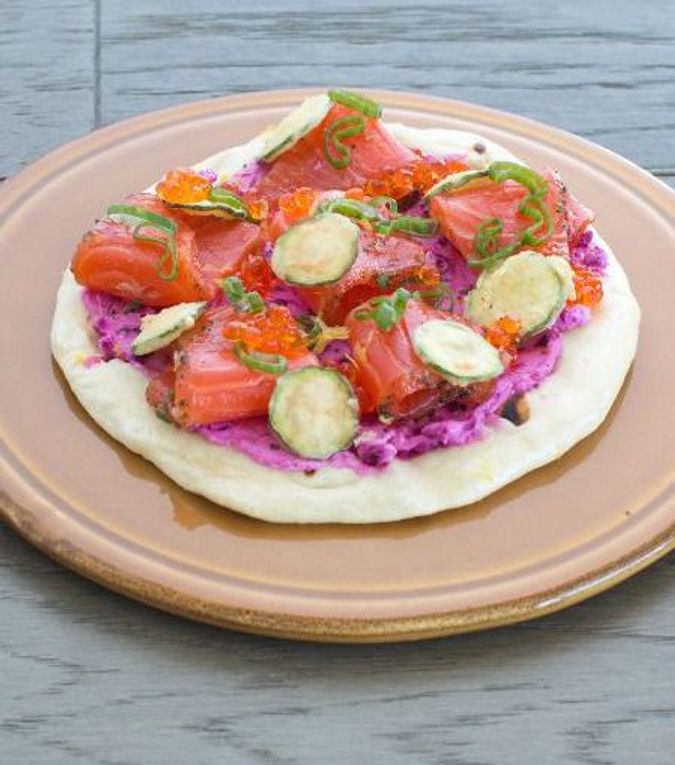 Salmon is cured with zatar to make up a first course at Middle'terranea. Image by Kevin McCullough

“It’s essential that we start looking at alternate ways of nourishment,” he said. “There are water supply issues, and animal feed is triple the price. We’re trying to be smart with how we utilize ingredients and take a healthier, more sustainable approach. It’s something we’re applying in all of our restaurants.”

Sobel — whose mother’s side is Italian and father’s side is Ashkenazi Jewish — said both his grandmothers and their cooking were huge influences in his decision to become a chef.

As for how his Jewishness has found its way into his food before now, he said, “I’ve been eating pastrami since I’ve had teeth, and I love to make it myself.” He also has put his own spins on kugel to use as a component in other dishes.

“It’s really important for me to not forget my family heritage,” said Sobel. “My grandmothers were super influential in getting me to cook professionally. That’s always on my mind.”

(Despite winning the “King of Porc” title in the Cochon 555 competition several years ago, in which top chefs cook dishes from heritage pigs, Sobel said pork will not appear on this menu.)

When asked whether the popularity of “Jerusalem: The Cookbook” by Yotam Otto­lenghi and Sami Tamimi (the Israeli and Palestinian chef–business partners who have several restaurants in London) had anything to do with the decision to do Middle’terranea, Mina looked perplexed.

“One hundred percent no,” he said, remarking that he only saw the book for the first time a month ago. (Sobel, who knows Ottolenghi and was aware of the cookbook much earlier, called Mina “an original thinker.”)

Mina joked that with so many varieties of hummus on offer at the grocery store these days, it’s the perfect time to bring out the Middle’terranea concept.

“Falafel are amazing when they’re made right,” Mina concluded. “People are used to poor technique with this food, but when you have the right products and you put in the right technique, it’s mind-blowing.”

He’s right about that. The food we were able to taste at the press preview was indeed some of the most refined and delicious Middle Eastern food I’ve ever tried.

Tickets for Middle’terranea are selling quickly and can be bought here.

This article first appeared on . Alix Wall is a personal chef in the East Bay and beyond. Her website is theorganicepicure.