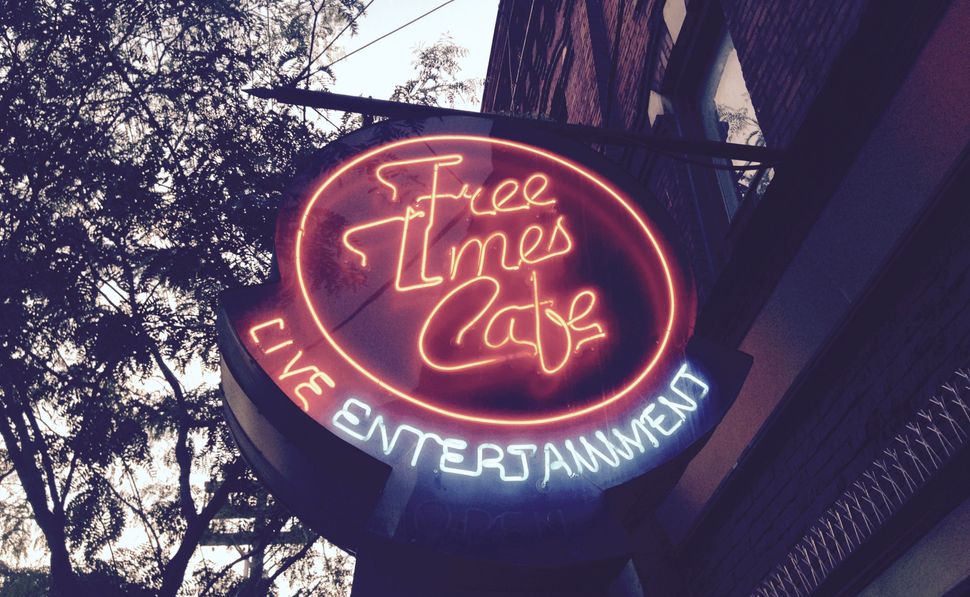 Sporting a sparkly tank top on a sweltering Sunday, Judy Perly steps onto a tiny platform that doubles as the stage at , her downtown Toronto restaurant.

“I was in yoga class,” she tells the packed room of brunchgoers at “Bella! Did Ya Eat?”, Free Times’ hugely popular Jewish weekend buffet. “Everyone’s doing their ‘oms’. And I’m doing ‘oys’.”

She leads the room in a chorus that climaxes in a robust, keening “oy gevalt!” Bagels or coffee mugs in hand, customers break into riotous laughter.

Perly barely skips a beat after hopping offstage, shuttling from table to table like a hyperkinetic Earth mother. A klezmer trio, the Horables, begins setting up behind her. “Do you want me to get you some applesauce?” she asks a crew of Asian customers Instagramming their latkes. “You have everything you need?” she trills at a multigenerational table whose patriarch, mouth stuffed, just nods.

Thirty-five years into running Free Times, and 20 after launching her still-packed Sunday brunches, Perly has become as much an attraction as the haimishly over-the-top food she serves.

“What I’ve done with Jewish food is create a place for families to go,” she says. “That’s the most important context in which my food exists.”

It’s also attracted a devoted core of regulars, who now compete with throngs of tourists for places at two Sunday seatings each week.

“It’s so nice to have this in Toronto,” said Paula Bass, a Free Times veteran spending the morning with her daughter and mother. “Toronto is not New York. It’s very diffuse. Judy makes everyone feel welcome. And she makes the best latkes in town.”

The restaurant itself — a warren of low-ceilinged rooms with an endearingly shabby-chic vibe — remains a boho bastion in a neighborhood where condos and glossy cafes are displacing well-worn mom-and-pop shops and ethnic eateries.

“In the late ‘70s, I was a hippie artist and an art teacher,” Perly recalled a few days later from her Toronto condo a few blocks west of Free Times, near the historically Jewish Kensington Market neighborhood. “When I left teaching, I started a whole-foods catering business, which got too successful too fast. I didn’t want to take the next step, so I walked away from that too. But I didn’t want to end up a starving artist. So when a friend suggested I buy a restaurant, I listened.”

A cafe called Free Times — opened by a Jewish expat couple from California — was up for sale. “The original owners had called it Free Parking, but the city told them to change the name, since they didn’t actually offer it,” Perly laughed. Along with an unnamed, “inappropriate” partner, Perly took over the cafe in December 1980, using some of an inheritance from her late father.

She introduced live music a few months later, which would soon make Free Times a force in Toronto’s nascent music scene. “I was going out with a guy who was a part-time musician, and he wanted a place to play,” she said. There wasn’t really anywhere to perform in Toronto. Then his nephew started playing. Then other musicians.”

“Music has been Free Times’ biggest contribution to Toronto,” says Lanny Shereck, an artist, teacher and amateur musician who lives nearby. “Judy’s very open and interested in the arts, and she allows musicians and characters to take over the space.”

But a fire in 1990 led Perly to rethink the business and her life. “I was lost, depressed and burnt out,” she remembers. “The restaurant was closed. I was living at my mother’s house. And I started thinking: Why had I never put Jewish food on the menu? I wanted to do something more connected to my values.” 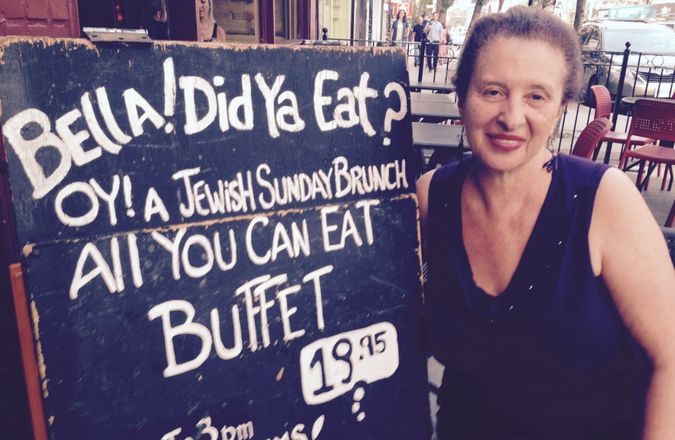 Reviving Jewish food — more than two decades before Toronto’s current nouveau-Jewish revival — “was chutzpedik,” Perly says. “I’m the one who started it all, and I get very little credit.” At first, she says, “I was so meshuggah about the soulful/authentic thing that I made my chef grate potatoes for latkes on my mother’s grater. I had to get back to the roots of things to heal. Now we do it in a Cuisinart.”

While the restaurant’s charm comes from its nostalgic realness, Perly’s kept the menu modern. “We’ve got more salads these days — kale, beet, chickpea,” Perly said. Stalwarts like blintzes and latkes are still made in-house by Perly’s very Toronto kitchen crew of Sri Lankans, Afghanis, Bangladeshis, “and a white Canadian guy.” Perly herself oversees everything that emerges from the kitchen.

“Jewish food’s hard to put in a restaurant context,” Perly says. “If you’re not Jewish, you don’t understand the subtlety of the food. And Jewish people themselves want to cook other kinds of food. So I have to train my cooks to do it — it’s all about the timing and spicing, and you’ve got the world’s biggest critics eating it.”

By hosting Jewish performers on Sundays, Perly also sparked a mini-revival of klezmer music. “She created steady, solid gigs for klezmer music, and that’s not easy to find — especially in front of an audience that’s appreciative,” says Rachel Melas, the Horables bassist. “And she pays, which is more than you can say for 90% of the club owners in Toronto.”

The restaurant also hosts weekly gatherings for Toronto’s Yiddish Vinkl, whose members chat in the mamaloshen and chow down on Perly’s Ashkenazi food.

And the “Bella, Did Ya Eat?” moniker? Perly swears this is a true story: “Years ago, I went to my grandmother’s house for Shabbat dinner. I had a reel-to-reel tape recorder for a college family-history project. My grandmother hears my mother’s voice on the tape, thinks its’ the phone, and yells, ‘Bella, did ya eat? Did you have supper?’”

Perly just renewed a 20-year lease on Free Times. “It’s more difficult these days than it used to be,” she sighs. “Storefront businesses in Toronto will die out within 20 years unless they’re attached to a condo or something. It’s just too expensive. And my prices are way too low.”

But for now, Perly — and Bella — will keep welcoming the throngs on College Street.