How Israel Made Me Fall in Love With Turkish Coffee 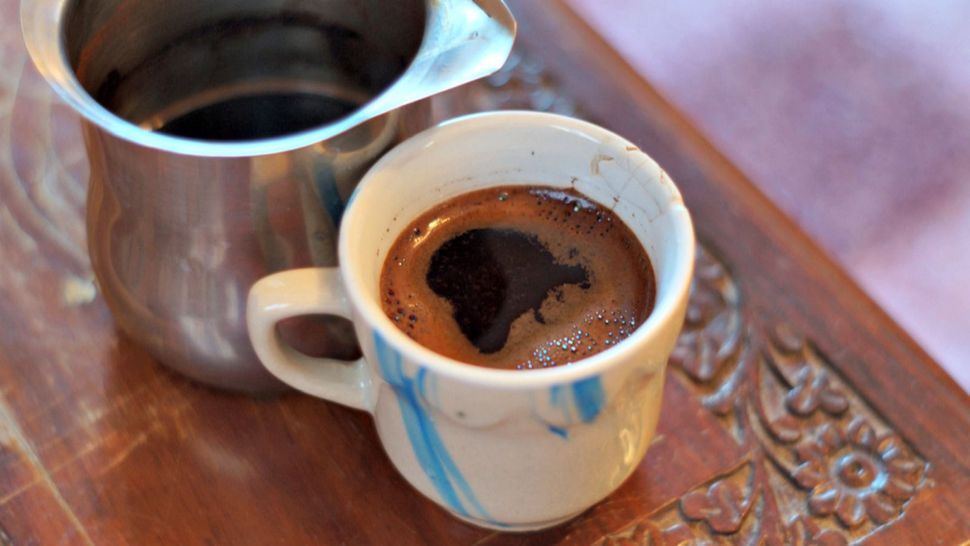 Traveling to Israel, like visiting Rome or Paris, tends to result in euphoric, sometimes life-altering food experiences. For me, it was all about the Turkish coffee. I was 24 and somewhere in the Negev desert, staffing a along with Israeli, Palestinian and Jordanian alumni of the Arava Institute for Environmental Studies.

In the already punishing light of an arid desert morning, I noticed one of the students crouched over by the side of the road as bikers whizzed past. I walked over to see if he was okay, when I saw he was hovering over a small camping stove set with a glinting metal pot, which I would later learn is called a finjan. He stirred briskly with a metal spoon, looking not unlike a sorcerer mixing a potion.

More Beyond the Bagel

A few minutes later, he started pouring tiny cups of muddy, petrol-black liquid and passing them around. I took a sip. The drink was bracing but smooth — with a soft foam bubbling on top and a deep hint of cardamom underlying the intense coffee flavor. Despite my sworn faithfulness to the French press, I fell in love.

Turkish coffee, I would learn, is ubiquitous throughout Israel, as it is in many Middle Eastern countries. In “The Foods of Israel Today,” Joan Nathan describes the process for brewing the coffee: It is “made from beans freshly roasted in a long-handled iron pan and ground in a wooden mortar.” Traditionally, Nathan writes, the man who pounds the coffee beans taps out a drum-like tune as he works. The ground beans are then “mixed with water and brought to a boil twice, sweetened, and then ceremoniously poured from a finjan.” The double boil imparts a rich flavor and inky texture to the drink.

In his “Encyclopedia of Jewish Food,” Gil Marks writes: “It seems to have been in Istanbul, around 1550, where coffee was first consumed in a social setting, the coffee house.” These coffee houses spread quickly throughout the Ottoman Empire where “the beverage that would become known as Turkish coffee was consumed on a daily basis” by Jews and Muslims alike.

Like coffee the world over, Turkish coffee is consumed throughout the day and comes with a set of social rituals. “Refusing a cup is considered impolite,” Marks writes. And the “scalding hot coffee is meant to be sipped slowly” — all the better to linger over with a friend. It is not uncommon to find men sharing a game of backgammon at three in the afternoon with coffee-ground stained cups sitting between them.

For me, however, Turkish coffee became the morning power drink I needed to schlep bikers’ luggage and set up rest stops in the middle of the desert.

Before the trip ended, I purchased a copper finjan in the Old City, resolving to add Turkish coffee to my daily breakfast routine back at home. I had also decided that I would eat chopped tomato and cucumber salad in the morning on the regular. I ended up failing on both fronts. Some food experiences are simply best enjoyed in situ.

How Israel Made Me Fall in Love With Turkish Coffee