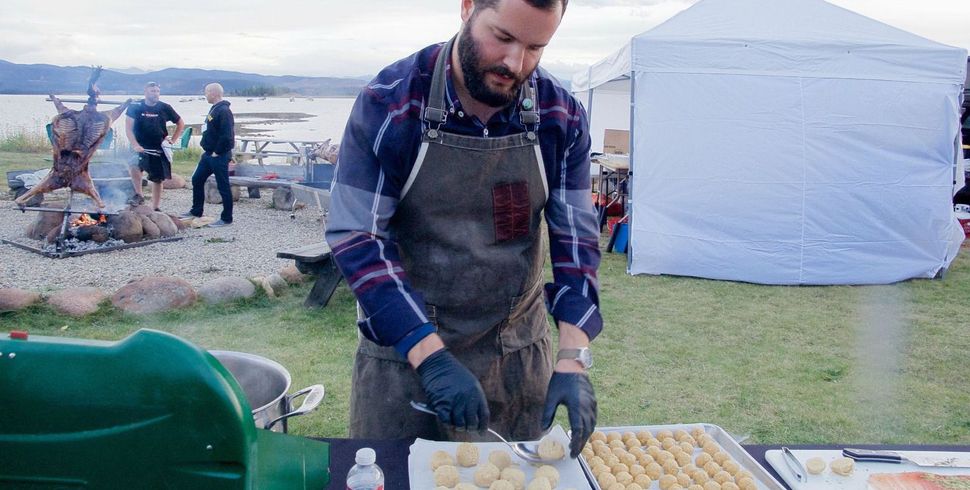 Joshua Pollack (above) makes his matzo balls with THC-infused schmaltz.

When Joshua Pollack got a call from Josh Dinar, a Denver restaurateur, asking if he would provide a bagel brunch for a Jewish foodie conference called , he wasn’t surprised. Since opening Rosenberg’s Bagels last year, Pollack, 31, has become known for bringing authentic bagels to Denver — previously considered a virtual bagel desert.

But then came the more unusual part of the request: “We’d also like you to do a cooking-with-cannabis demo,” Dinar said.

Pollack, it turns out, is known for something besides bagels: He’s gained notoriety as the guy who’s made smoked salmon cured in something stronger than salt: a marijuana solution that turns his fish into a savory pot edible — something entirely distinct from your basic magic brownies. 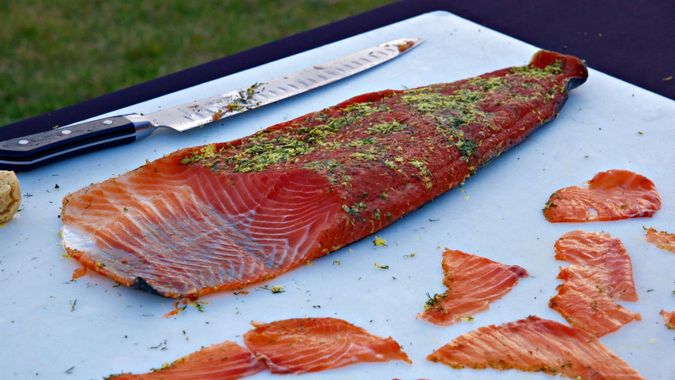 The salmon above is cured with something stronger than salt.

While weed has long been a presence at Jewish conferences — in an informal, after-hours kind of way (even Jeff the 420 Chef, another marijuana chef, first learned to smoke it as a teenager at a National Conference of Synagogue Youth convention) — the Harvest organizers believe this is the first time it’s been made part of an official program.

Given that marijuana has been legal for recreational use in Colorado since 2012, she said, “we decided to include it because, well, how could we not?”

Talking about big issues are, for her, “what it means to be Jewish and to be a food professional,” Kornhauser said. “Plus, as my mom said, the term ‘pot-za-balls’ should have been coined long ago.”

And so it happened that after some 60 participants observed the kosher slaughter of a sheep late last month at a 3-day gathering of Jewish food professionals — writers, chefs, farmers, entrepreneurs — sponsored by Hazon and the Charles and Lynn Schusterman Family Foundation and held in the Colorado Rockies, the mood was lightened significantly by Joshua Pollack. 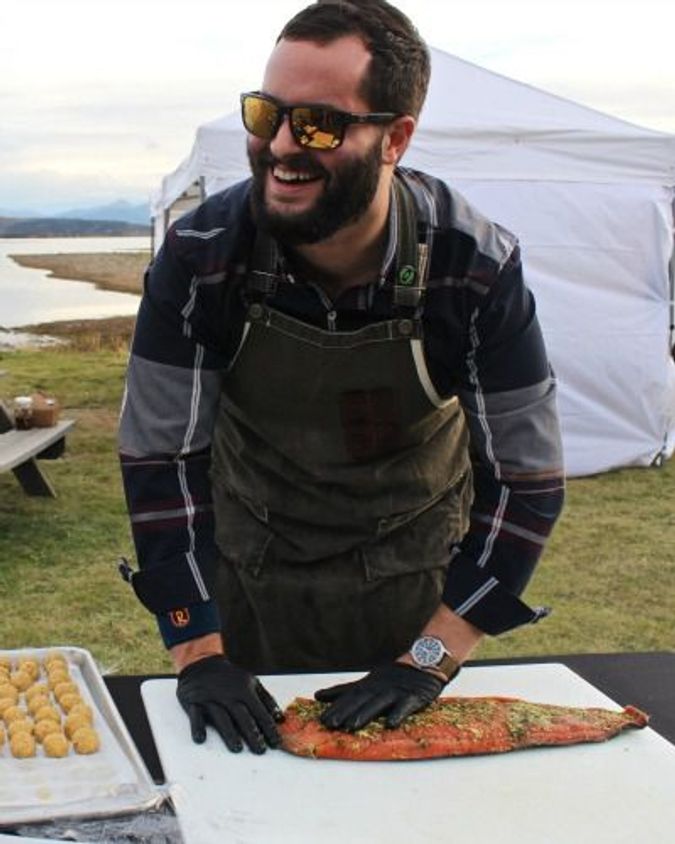 The session had the blessing of Hazon’s founder and president Nigel Savage, who, before addressing the group later that evening, told those assembled, “This is the first time I’ve ever tried to teach Torah to a group who is mostly stoned.”

Pollack is originally from Hillsdale, New Jersey. He moved to Colorado to attend college and never left. He started smoking pot at 14, and also witnessed how much it helped his late mother when she was battling cancer.

“It was easy to see from a young age how it had medicinal properties, and I wrote a paper about legalization versus criminalization in high school,” he told the Forward.

While working in the financial industry post-college (just when the markets were starting to fail), marijuana was being legalized for medicinal use in Colorado.

“I had been passionate about it before I came out here because of my mom,” he said. So he joined the burgeoning cannabis industry, as a grower.

With the opening of Rosenberg’s — his mother’s maiden name (he calls her his “guardian angel” on the store’s web site) — he first gained attention for importing water from New York to try to come up with a true New York bagel in Denver.

Once he did that, he decided to capitalize on the popularity of pot edibles, and realized that his background in smoked fish was a great place to start.

In his demonstration, Pollack explained how he makes his smoked salmon, which is cured in a special solution of dill, lemon and Tetrahydrocannabinol (THC), and his matzo balls, which are made with THC-laced schmaltz. (THC is the component in marijuana that causes the high).

He explained that when cooking with cannabis, the herb must first be transformed into an alcohol- or fat-based solution. Most chefs cook marijuana in butter or oil, which is why “every baked good you can imagine has been infused,” Pollack said.

Since an alcohol solution is used to cure salmon, Pollack says he “had a light bulb moment.”

Pollack made both dishes at home, not at the conference itself — and he cannot yet sell either dish in his shop because he hasn’t figured out how to regulate how much THC is in one slice of salmon or one matzo ball. (With legalization come strict rules about how much THC can be in a serving.)

At the workshop, Pollack warned participants — especially the newbies — to go slowly. “You can always eat more, but you can’t eat less,” he instructed.

The salmon would “hit” first, taking around 15 minutes, because the alcohol solution would be absorbed by the body faster than the fat solution used for the matzo balls, which would take up to 45 minutes.

It should be noted that Pollack’s lox is some of the silkiest I’ve ever tasted, with a mouth-feel that is downright swoon-worthy. But not surprisingly, his infused stuff, when he first made it for an event last year, gained him more press coverage. Eventually, he hopes to be able to sell it for Passover or the High Holy Days.

Combining his two passions — Judaism and cannabis — raised questions at the conference about the connection between the two, Pollack said, and he loved having that conversation.

“There’s something inherent in Judaism about cannabis use,” he said. Given that marijuana is a naturally farmed substance and not synthetic, he said he believes “it fits into our values about farming and sustainable food, which are part of our culture and how we think about things.”

While Kornhauser was the one mostly in charge of programming (along with Dinar), the Harvest was funded by the Schusterman Family Foundation, as part of its Connection Point program, which brings Jews together around a common interest — in this case, food. Justin Korda, executive director of the ROI Community of the Schusterman Family Foundation, said that Kornhauser and Dinar explained their intention to include the pot demo to him in a satisfactory manner and that he felt confident that “this wasn’t going to be ‘Hey let’s get together as a fun recreational activity and get high,’ ” he said.

“I wasn’t worried and I didn’t see it as controversial,” said Korda, adding that the sheep slaughter was, on a personal level, more of a concern.

“Given the fact that this happened in Colorado, and therefore was totally within the parameters of legal behavior, it really was a non-issue for us,” he said. “This was a gathering of foodies meant to bring together food professionals and influencers and have everyone network and engage in meaningful conversations about food, Jewish values and ethics. And I think the program itself was within the parameters of those goals.”

But then came a disclaimer of sorts: “The Schusterman Family Foundation is by no means trying to champion the legalization of marijuana and this was not an attempt to push that agenda,” Korda said. 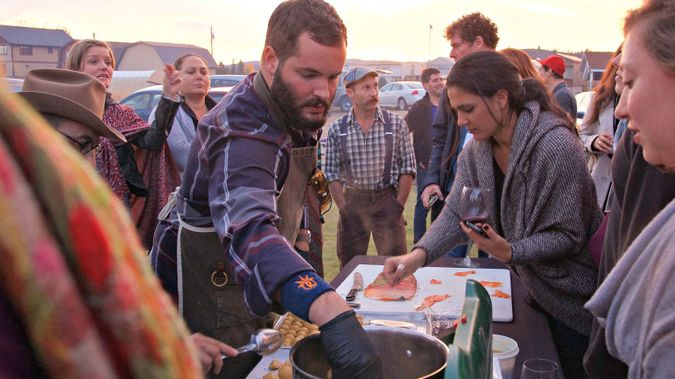 Most conference participants took part in eating the samples Pollack offered, and many praised the sponsors for their progressive stance.

“I was really impressed with the addition of the cannabis class, but I was more impressed that the person who ran it was a business owner and a conference participant,” said Ari Miller, co-owner, CEO and chef at the Food Underground in Philadelphia.

“It was the first time I was able to appreciate what legal, recreational marijuana meant. And to see it approached with not just professionalism and creativity, but that it was also brought into the construct of the conference itself, with kneidel and gravlax, I couldn’t imagine a more fitting and engaging way to celebrate why we had all come together, where we had come together. Except maybe with a sheep slaughter. Oh right, we did that, too.”

Not everyone felt that way. There were at least a handful of people who did not partake, with one participant saying he felt the program was somehow inappropriate.

“Most people that participated were just looking to get high and did not really look at it as an educational enrichment activity,” the participant said. “I tried to go into it with an open mind, but at the end it seemed that everyone was a little out of it.”

While Pollack was pleased with the way his demo turned out, he later said that he was most excited about the contacts he made with the rabbis who carried out the kosher slaughter. A conversation he had with them made his head spin with possibilities for the future.

“As an herb, cannabis is inherently kosher, so if we made the salmon in a kosher facility, it could be kosher,” he said. “And that would be really groundbreaking.”