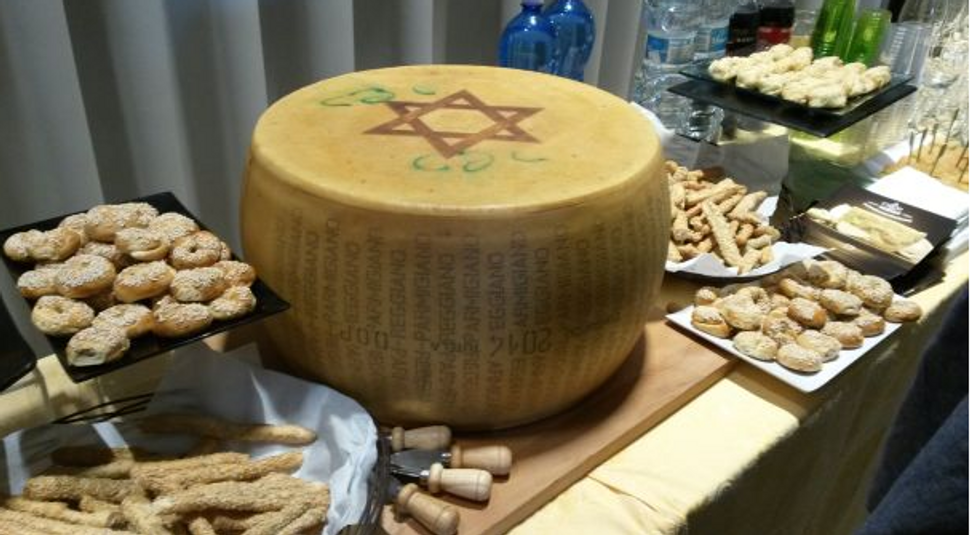 Cheese lovers of the Jewish world, rejoice: the original Parmesan cheese from Italy is now available in a kosher version.

The first cheese wheel, adorned with a large Star of David and the word “kosher” written on it in Hebrew, was cut open last week at the Israeli pavilion in the Milan world’s fair.

Although the English word “Parmesan” is often used for several grated cheeses, it applies more correctly to Parmigiano-Reggiano, a specific kind of hard cheese produced since the 11th century in the area around the city of Parma and a trademark protected by EU law.

Nicknamed the “king of Italian cheeses,” Parmigiano-Reggiano is made under strict guidelines that regulate anything from the diet of the cows, which must be fed solely on grass and hay, to the minimum ripening period of at least twelve months. It must also be produced in the area of Parma or in the neighboring provinces of Reggio Emilia, Modena and Bologna, which give the cheese its name (in Italian the terms “Parmigiano” and “Reggiano” mean, respectively, “from Parma” and “from Reggio”).

The hardest part of making the cheese kosher was the rule stating that it must be curdled with animal rennet, which producers had to obtain from animals slaughtered according to Jewish religious law. While the rennet must be extracted from a kosher animal, the enzyme itself is not considered meat so the cheese does not violate the prohibition of mixing milk with meat. The rennet “is treated in a way that leaves no trace of meat,” said Elia Richetti, a rabbi in Milan. “Nevertheless, it must come from a permitted source.”

Until recently there was no such thing as “authentic” kosher Parmesan. Other varieties of traditional Italian grated cheeses were available to observant Jews, including a kosher version of Grana Padano, a cheese similar to Parmigiano but with a faster maturation period and produced in the northern region of Lombardy.

Earlier this year two cheese makers, the Bertinelli family-owned producer and the Caseificio Colla, finally announced they were working on a kosher Parmigiano. Bertinelli unveiled its first cheese wheel at Milan’s Expo 2015.

“It has been a big challenge: bringing together an accurate culinary Italian tradition and the strict requirements of kasherut, without affecting the quality of the product,” said the CEO of the company, Nicola Bertinelli, during the ceremony at the Israeli pavillion.

Bertinelli said he plans to produce around 5,000 kosher Parmesan wheels each year. With fewer than 50,000 Jews in Italy, Bertinelli is mostly targeting the North American and Israeli markets and has already obtained a kosher certification from a U.S. agency, the OK Kosher Certification based in Brooklyn, New York.