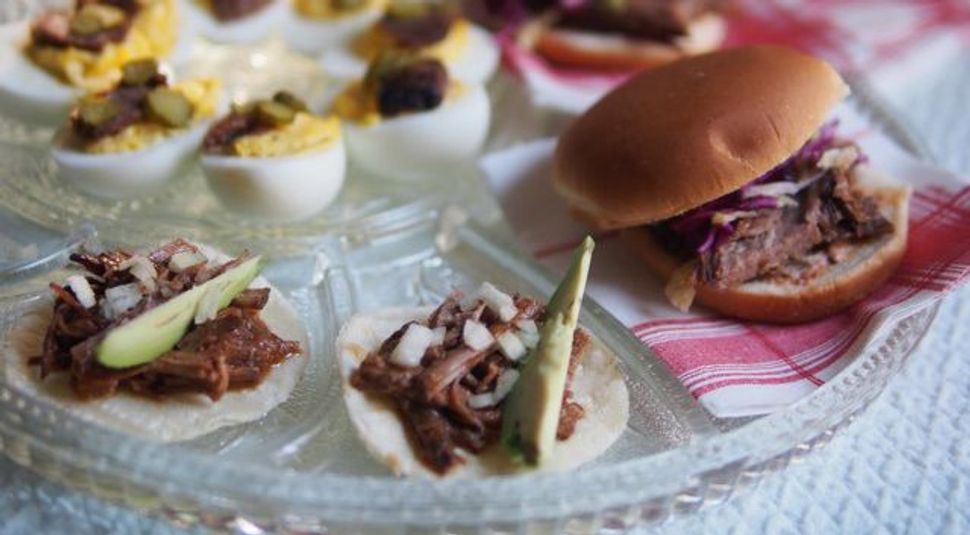 As the author of “The Brisket Book: A Love Story With Recipes,” I was anointed “The Brisket Queen” on Twitter by Julia Moskin of The New York Times. A passionate brisket cook, eater and chronicler, and a keen observer of the brisket zeitgeist, I need no crystal ball to predict brisket’s future: Brisket is going small — in a big way.

Some of the newest and most delicious brisket offerings today are bite-size. There’s brisket as bar food, as snack, as food truck offering, as cater-waiter passed hors d’oeuvres. There are sliders, tapas, artisanal hot dogs, craft sausages and deviled eggs. There are enchiladas, tacos, kreplach and other dumplings. (A mini-trend in itself is that brisket is getting stuffed into all things stuffable.)

Let me reassure you, brisket has never aspired to being schmancy; the cater-waiter thing just happened. And why not dress up brisket once in a while? Let’s embrace its modern vibe. Is it a crime to serve tiny, shiny brioche rolls that soak up the delicate juice of a brisket slider? Would a bubbe be scarred for life if she sampled Zingerman’s shredded barbecue brisket on a crostini, sprinkled with a tangy yellow mustard Carolina-style slaw? Is there some law that says brisket leftovers can’t be more imaginative than leftover brisket plus gravy plus egg noodles? Is there a reason that some of a 5-pound hunk of steer can’t make a cameo appearance on a 3-inch deviled egg?

Frankly, why should pigs in blankets have all the fun? And small is fun. Just ask anyone who has eaten his or her way to brisket bliss with Chef Jesse Shenker’s irresistibly delicious brisket tots.

With all the small wonders now available, where do you draw the line between fun and flop? I’d have to say, at the unlikely: a deconstructed “brisket bento box” from a chic New York caterer. And at the unseemly: “drunken Kobe brisket sliders” from a restaurant in Orlando, Florida. Brisket, as I am sure you know, likes to have a good time. But “drunken brisket”? A sip or two of Manischewitz will do, thank you very much. Even at the holidays.

Which brings us to Hanukkah. Here’s how I’m seeing it this year. First, think big. If you’re making a traditional dinner, braise a fabulous show-stopping brisket. (Paging Joan Nathan. Page 105 in “The Brisket Book.”) Then, think small. Whip up some appetizing brisket appetizers to serve when your guests arrive for the celebratory meal. Or, if you’re giving a Hanukkah party where it’s all mix, mingle and nosh, make the finger food count. They say they want the crudité, but they really want the brisket tacos, the brisket sliders and the brisket deviled eggs. And please pass the brisket tots!

Stephanie Pierson is the author of “The Brisket Book: A Love Story With Recipes” (Andrew McMeel Publishing, 2011). Find her on Twitter, @TheBrisketBook.