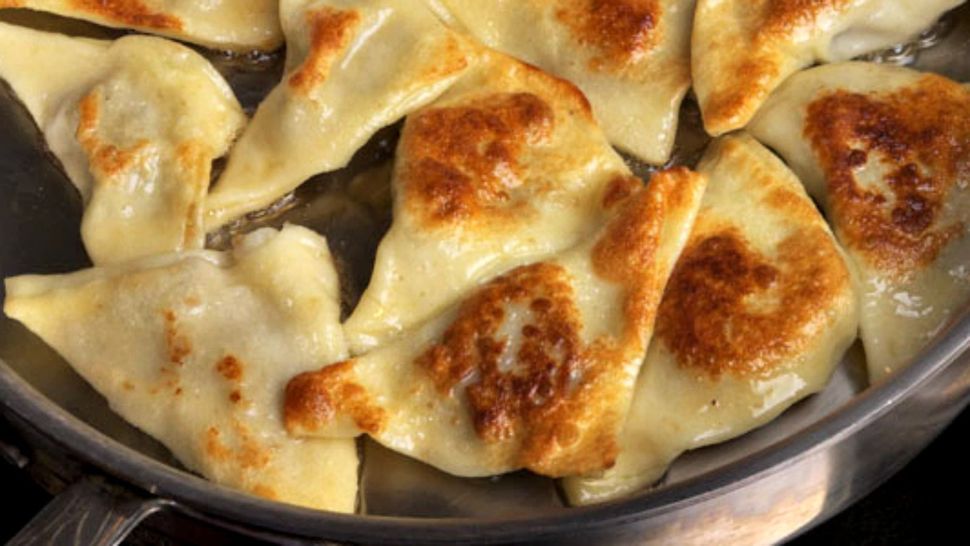 Traditionally boiled and served in soup, kreplach can also be fried and eaten as finger food… say, your next Hanukkah party.

My neighbor, Lois Baron, gave me a version of this recipe, which calls for roasting and braising a beef brisket. When I told her I intended to give it a shot using leftover pot roast she said, excellent idea!

Kreplach is a great way to make use of leftovers. Kreplack are often called Jewish ravioli, a staple of Jewish cuisine. Consistent with that cuisine, the main item is cooked, then it’s cooked again, and then its cooked again. (Why is this?!) At least in Lois’s recipe. A brisket is roasted, then it’s braised, then it’s ground with seasonings and egg, wrapped in dough, boiled, cooled then cooked to serve. That’s three times that it gets fully cooked before being eaten.

These are traditionally used in soup, and they’re great that way, but Lois fried some for me and they were out of this world. There’s something about the texture that’s really, really satisfying when they’re fried crispy. And given the opportunity to fry, I say fry!

Lois’s dough is perfect — supple and soft enough to roll thin, but dry enough that I had no problem rolling it out without its sticking. I happen to have a boffo bicycle cutter thanks to Opensky for perfect uniformity, but a pastry wheel, pizza cutter, or pairing knife works fine, too; these measured a little under 3 inches square.

1) Make the dough by combining the flour, 2 eggs and water in the bowl of a standing mixer and mixing till the dough is baby’s-bottom smooth. You may have to finish it by hand (or do it start to finish by hand). Wrap in plastic and set aside.

2) Make the filling by combining the meat, 1 egg, the onion, salt, black pepper and paprika in the bowl of a food processor and pulse till it’s pureed. (You can also do this by passing the mixture through a meat grinder then stirring in the egg; if you want the onions to remain chunky, fold them into the mixture after the meat is puréed or ground.) 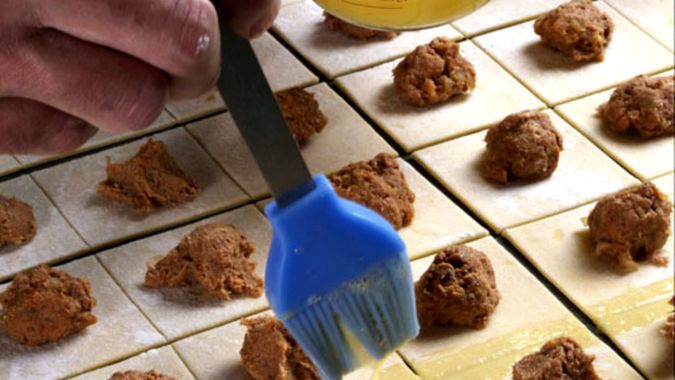 3) Roll out the dough to less than 1/8-inch thick. Cut 3-inch squares as pictured above. Put a teaspoon of the meat in the center of each. Mix the last egg with a little water and brush it on adjacent sides of each square, then enclose the filling in a triangular shape, sealing dry edge to egg-washed edge.

4) Boil the dumplings in salted water till the pasta is cooked, 3 or 4 minutes. Drain and chill beneath running water or in the cooking pot.

5) When ready to cook, heat a large pan with enough oil to coat the bottom by about an eighth of an inch over medium high heat and sauté the dumplings till they’re golden brown and delicious as they are in the lead photo.