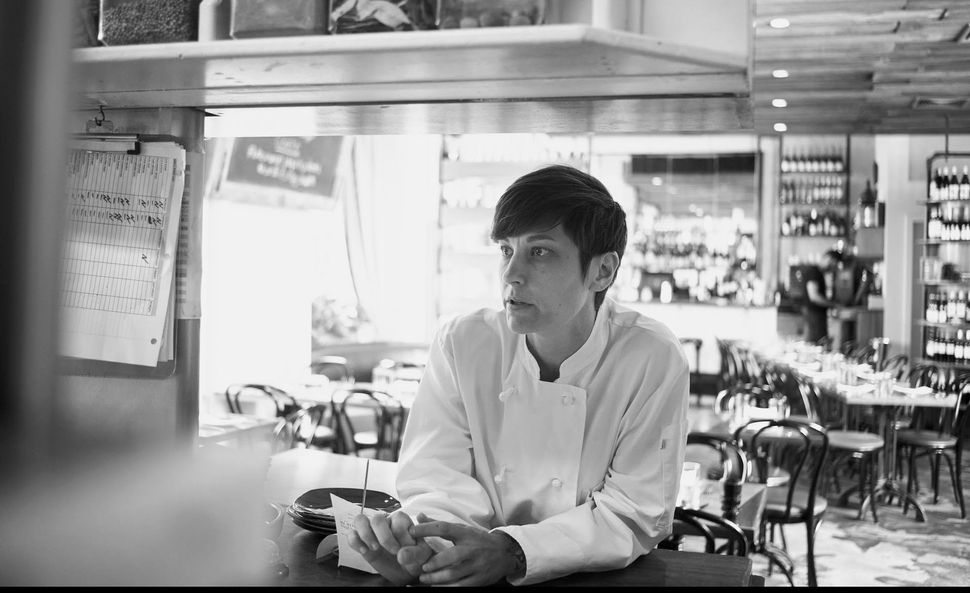 JTA – The successful chef and owner of four buzzy restaurants in Manhattan, Einat Admony recently decided to take on a new challenge.

The Israel-born chef, who runs two Taïm falafel joints and modern Mediterranean eateries and Bar Bolonat, wanted to create a casual spot where the focus was on small plates and wine.

She considered fusing her signature Sephardic Israeli food with Mexican cuisine, but decided that Spanish food would be a better complement — thanks largely to its overlapping ingredients like tomatoes, saffron, olives and olive oil.

The result is Combina, which opened to strong reviews this fall.

“I just really like Spanish food and the tapas style,” Admony said.

She’s no expert on Iberian food, she says. Instead, she’s doing her “signature Israeli food with a Spanish twist.” Dishes include Mujadara Paella (a spin on the Lebanese and Spanish dishes) and Sabich Tostada, a melding of the Israeli/Iraqi and Mexican sandwiches.

If it sounds innovative, it is. But Admony is but one of many chefs across the U.S. who are pioneering inventive — and truly modern — ways to merge Jewish and Israeli food with other cuisines from around the world. 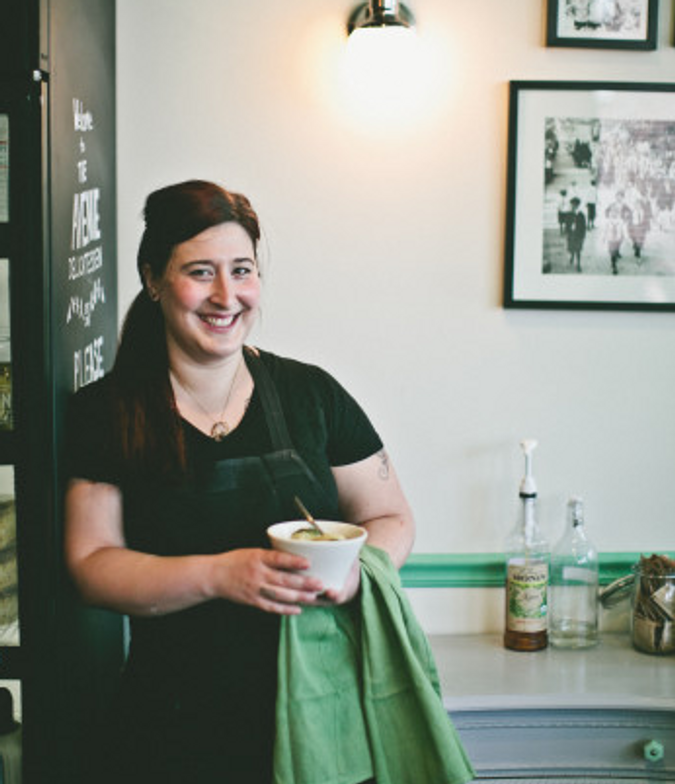 “Jewish cuisine is about taking the long way around and cooking food that is real and homey,” says Laura Frangiosa, owner of The Avenue Delicatessen in suburban Philadelphia, which merges Italian and Jewish foods. “And those are all trends that are popular in dining these days.”

Jewish food appeals to the masses, says Macy Hart, president of the Goldring/Woldenberg Institute of Southern Jewish Life. He points out that many Southern towns with tiny Jewish communities host popular Jewish food events that are attended almost entirely by non-Jews.

“Little Rock, Arkansas, for example, has an Israeli food festival that people flock to,” he says.

Hart sees it as no surprise, then, that “Jewish-slash-something else” food is becoming popular around the country. “It’s a natural progression of the palate,” he says.

Just as traditional Jewish and Israeli dishes are drawing non-Jewish crowds, these inventive, internationally flavored updates can increase the appeal of classic Jewish food to younger members of the tribe.

“It’s about progression, about tapping into the next generation,” says Steve Auerbach, former owner of the now-closed Stage Deli in New York. “Millennials have new tastes, and those are the ones these chefs are going after. It’s about keeping it current. Young Jews want the occasional corned beef sandwich and potato pancake, but they want something new.”

And in big cities like New York and Los Angeles, where most of these fusion restaurants are cropping up, many customers may well have grown up eating one, or both, of these cuisines.

For many of these fusion chefs — like Frangiosa, who is Italian and married to a Jewish man — the blending of two disparate cuisines is personal. Take Aaron Israel and Sawako Okochi’s Shalom Japan, a Jewish-Japanese restaurant in Williamsburg, Brooklyn. They’ve been serving dishes like matzo ball ramen and a lox bowl with rice, cucumber and Japanese pickle since 2013 — usually to a packed house.

Israel says they get a lot of customers who are like them; one is Asian and the other is Jewish. And while Shalom Japan has been hailed for its ingenuity — “At its best, their food is fusion in the truest sense, seamless and utterly convincing,” according to the New Yorker — such culinary blending is a tradition that long precedes them, he says.

“Jewish people went from place to place and adapted the flavors of new places to their cuisine,” says Israel. “That’s the whole history of Jewish food.”

Hasia Diner, a professor of Hebrew and Judaic studies and history at the NYU Skirball Department of Hebrew and Judaic Studies, agrees. “It was always fusion,” she says. “Throughout history, Jews created food that reflected the ingredients available to them, and the climate and style of the people around them. And given the ubiquity of Jewish migration, they were always picking up and moving and getting new styles.”

This culinary adaptability made them “culinary cosmopolitans,” Diner says, pointing out that as far back as the late 1800s, Jewish cookbooks featured recipes for Italian food and Chinese food.

“Nowadays it’s just more self conscious and a little ironic,” she adds.

The history of Jewish-Spanish food is of particular interest to chef and restauranteur Alex Raij. Raij is Jewish and her husband, Eder Montero, is Spanish; they already ran two successful tapas restaurants in Manhattan when they opened La Vara in Cobble Hill, Brooklyn, in 2011. Through La Vara, Raij explores the Moorish and Jewish legacies of Spanish cooking.

Rajj says she likes to imagine the kinds of foods that would have thrived had Spain’s Jews been able to stay. Many of the traditional Spanish sauces — like the pepper-based romesco — have their origins in Moorish and Jewish foods, she says.

Not far away, in Williamsburg, “Top Chef” alum Ilan Hall recently opened Esh, an Israeli-style barbecue spot. Esh takes the place of The Gorbals, a Scottish-Jewish fusion restaurant Hall opened in Los Angeles in 2009 and in New York in 2014. “That was a representation of my childhood,” says Hall, whose father is Scottish and mother is Israeli.

For his new venture, he decided to stick to more straightforward, Israeli-style grub, something he says is undeniably popular these days — witness the success of Admony’s empire, as well as that of Philadelphia chef Michael Solomonov’s popular, inventive restaurants. Hall says he will be using some Texas-style barbecuing techniques.

“This food is healthy and simple,” he says. 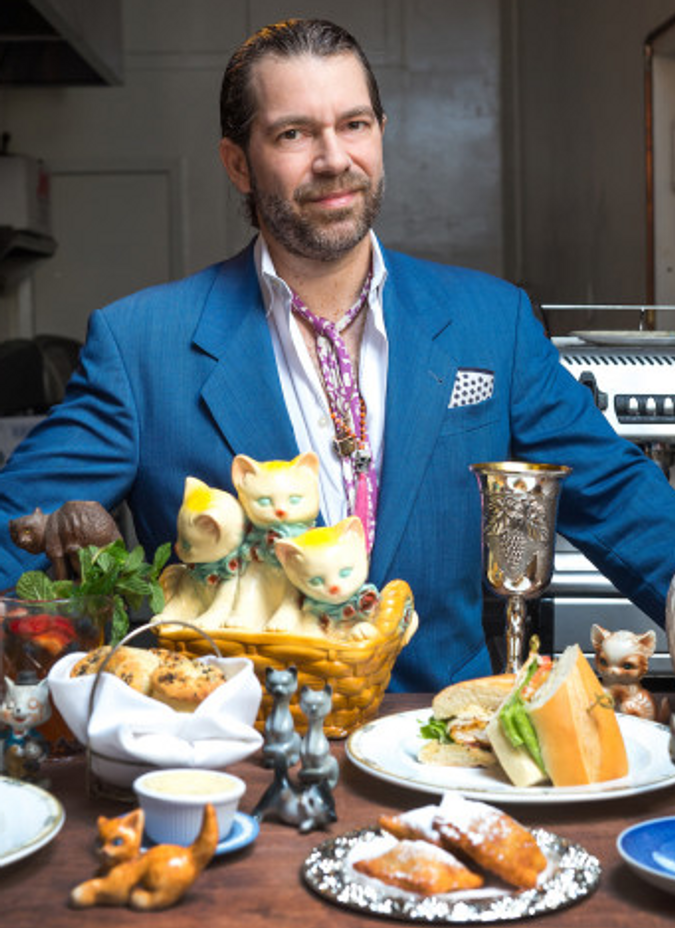 Richard Kimmel, the owner of Jewish-soul food venues Kitty’s Canteen and Kitty’s-a-Go-Go in Manhattan. Image by Courtesy of Richard Kimmel

For Richard Kimmel, owner of the the Lower East Side jazz bar and Jewish-soul food joint Kitty’s Canteen (in which Snoop Dogg is a creative partner), the fusion of soul food and Jewish cuisine started for generations ago.

Kimmel, who founded the music venue The Box, is the grandson of Kitty Kimmel — a bookkeeper at a talent agency who used to cook for the jazz greats of the 1930s. Her food, which began as traditionally Jewish, became influenced by soul food, says Kimmel.

Kitty’s Canteen and its recent spinoff, Kitty’s-a-Go-Go, serve matzoh-meal fried chicken and and their signature “Bisgel,” a bagel-biscuit hybrid, which Kimmel says was born when Dizzy Gillespie poked a hole in one of Kitty’s biscuits.

“The combination of Jewish food and soul food is very natural to me. It’s my life,” says Kimmel. “Like jazz, it’s something of an improvisation, but both foods are literally meant to warm your soul. That’s a sentiment we share.”