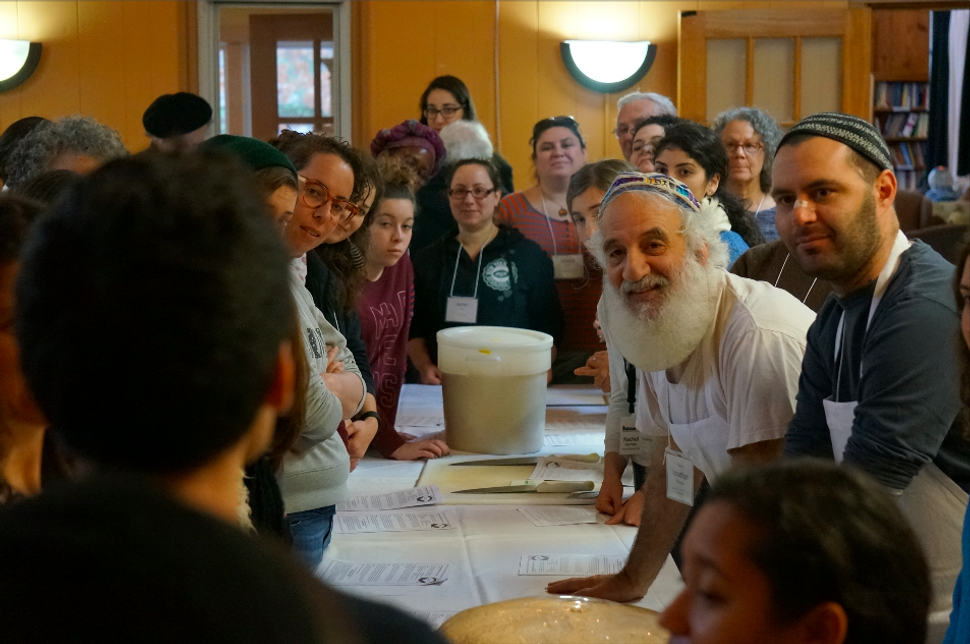 For a certain type of food- and sustainability-loving Jew (count me in on that list), and really for anyone who enjoys eating well, attending a conference or event at the Isabella Freedman Jewish Retreat Center in the Connecticut Berkshires is a treat. Unlike most conference centers, with their “plasticky” manufactured meals, Freedman is an eco-friendly wonderland (composting! reusable mugs! fair trade coffee!) with nourishing, locally sourced food to match.

Still, even as I have come to expect great things from the Freedman dining hall, the homemade bagel brunch at the annual Hazon Food Conference last week was a particularly spectacular experience.

Each morning, chef Mordechai Schram and his team greeted attendees with slow-cooked oatmeal and steaming miso soup (a traditional Japanese breakfast dish). To these buffet staples he added scrambled eggs and tofu, breakfast potatoes, chopped Israeli salads and, one day, a creamy vegan quiche made from a base of blended tofu, cashews, miso and nutritional yeast.

On Friday morning, January 1, Schram invited conference participant Rabbi Jonathan Rubenstein into the inner sanctum of Freedman’s kitchen. Rubenstein lives in Saratoga Springs, New York, where he co-leads a congregation with his wife, Rabbi Linda Motzkin. In addition to the service-leading, spiritual guidance and pastoral care that come with his rabbinical position, since 2004 Rubenstein has run Slice of Heaven Breads, an educational non-profit bakery located in his synagogue’s kitchen.

At the food conference, Rubenstein taught a well-attended session on the art of challah braiding and bagel rolling. Then, in a gesture of extreme kindness, he and a handful of volunteers rolled more than 150 bagels, which were then boiled and baked for the conference’s goodbye brunch. Sprinkled with poppy or sesame seeds and gently puffed with a chewy crust and tender, yeasty inside, they were as good as any revered New York City bakery’s bagel. They were the perfect thing to eat while welcoming the New Year’s first morning.

To round out the brunch offerings, chef Schram laid out a heroic spread of lox and whitefish salad, three types of cream cheese (plain, cinnamon-raisin and a cashew cream vegan version), sliced veggies and capers, scrambled eggs with mushrooms and onions and platters of jewel-toned blood orange and clementine wedges.

As we were packing up the car, I grabbed a couple of still-warm bagels and tucked them into a napkin. As a New Yorker, friends living in bagel deserts sometimes ask me to tote along a baker’s dozen for their freezer when I visit. But this time, the bagels were coming home to the city for me.