The Disappearance and Return of the Date Palm 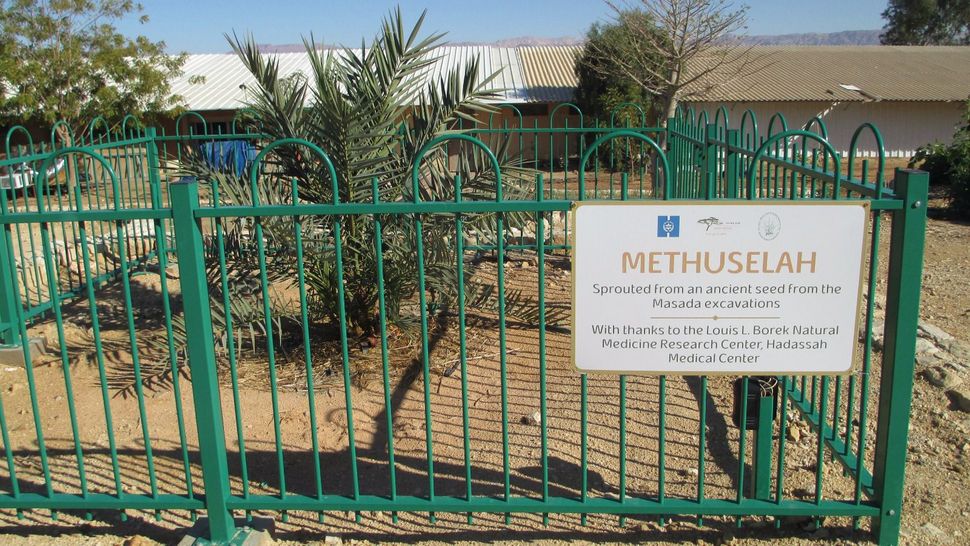 Methuselah date palm, grown from a 2,000-year-old seed found at Masada, is now in kibbutz Ketura.

The history of the date palm in Israel is inextricably bound to the history of Israel itself. A great presence whether massed in plantations or growing wild in a desert oasis where they indicate water, their straight, unbranched trunks grow up to more than 80 feet and bear clusters of huge, arching leaves. As leaves are shed each season they are replaced by new clusters. Male and female flowers grow separately in dense bunches on separate trees. Pollen from the male plant is carried by the wind to female flowers, and after fertilization, the dense bunches of flowers mature into heavy hanging fruit clusters.

Why We Eat the 7 Fruits on Tu B’Shvat
Almonds (and a Marzipan Recipe) for Tu B’Shvat
Wheat, Whiskey and Women

We think of plant breeding as a modern endeavor, but named varieties (cultivars), selected from among a population for their special qualities are recounted in ancient literature. The Mishna refers to several of them, including types that are especially good keepers or are the best for producing honey. Growing wild in the desert, the date palm still provides food, fiber, even fodder for camping shepherds and their flocks. Nearly every part of the plant has some use. Fibrous strips from the trunk can be braided into rope, and its leaves woven into baskets, mats, and household utensils. I have a vivid memory of my traveling companion, the late distinguished botanist, Avinoam Danin, creating a braided rope from strips of bark he took from a large date palm that grew in front of a gas station in the Dead Sea region. The original sukkot the Israelites dwelt in during their desert wanderings probably were made from dried-out date palm fronds, as are huts today. The fruits can be eaten fresh or dried (a plus when traveling), honey is pressed from the ripe fruit, a juice can be extracted from the tree’s trunk, and ground date pits can be fed to camels. And they provide welcome shade. A preparation from the strain known as the Judean date palm, once the glory of Israel, was renowned in ancient times for treating heart disease, chest problems, weakened memory, and possibly symptoms of cancer and depression.

The upright trees were associated with the virtues of a righteous, upright person as in “the righteous shall flourish like the palm tree” (Psalms 92:13-14). Their widespread cultivation and importance in everyday life, as well as their positive symbolic associations, had an impact on Israelite consciousness, as reflected in decorative motifs on synagogues, household objects and coins. The Maccabees used the palm as an emblem of victory on their coins, while the Romans, aware of the date palm’s significance to Israel, minted a bronze coin, Judea Capta, after the destruction of the Second Temple, depicting a woman weeping beneath a date palm. The land, once described as a “garden of God,” suffered neglect and deterioration over millennia, as travelers to Israel attested. Once thriving groves of date palms thinned out and the finer varieties, including the Judean date palm, became extinct.

The story of Jewish return to the land in significant numbers in the early decades of the 20th century is also the story of the return of the date palm to serious cultivation. Finer types that had disappeared were imported from Egypt, Iraq, Persia (Iran) and California. Date palm cultivation was reestablished in the warmer areas where they grow best, as in the Arava region. By 1982, according to data from the Hadiklaim, responsible for marketing and export, the export of dates had risen to 1,500 tons, and by 2011 to 6,000 tons. Israel’s cultivation of the more expensive, highly desired Medjool dates (large, juicy and very sweet) accounts for 35 % of the Medjool global export market.

Of the original strain known as the Judean date palm, there is hope for its reintroduction to Israeli soil. In 2005, one of three 2,000-year-old date seeds discovered in the 1963 excavations at Masada, and kept in storage, was successfully germinated by scientist Elaine Solowey, director of the Arava Institute for Environmental Studies at Kibbutz Ketura in the southern Negev. For luck, she planted the pits on Tu B’Shvat, after first soaking them in warm water with plant hormones and enzymatic fertilizer made from seaweed. By 2007, this single seedling, which she named Methuselah, was three and a half feet tall. In 2014 she reported, “He’s a boy, but his pollen may prove interesting.” In a 2015 updated story by John Roach that appeared in National Geographic magazine, Solowey recounted: “We pollinated a female with his [Methusela’s] pollen, a wild (modern) female, and yeah, he can make dates.”

On this Tu B’Shvat we have special reason to give thanks to God for the Seven Species with which He has blessed the land of Israel and for the miracle of the date palm.

Jo Ann Gardner is the author of “Seeds of Transcendence: Understanding the Hebrew Bible Through Plants” (Decalogue Books, 2014). Her website is joanngardnerbooks.com

The Disappearance and Return of the Date Palm