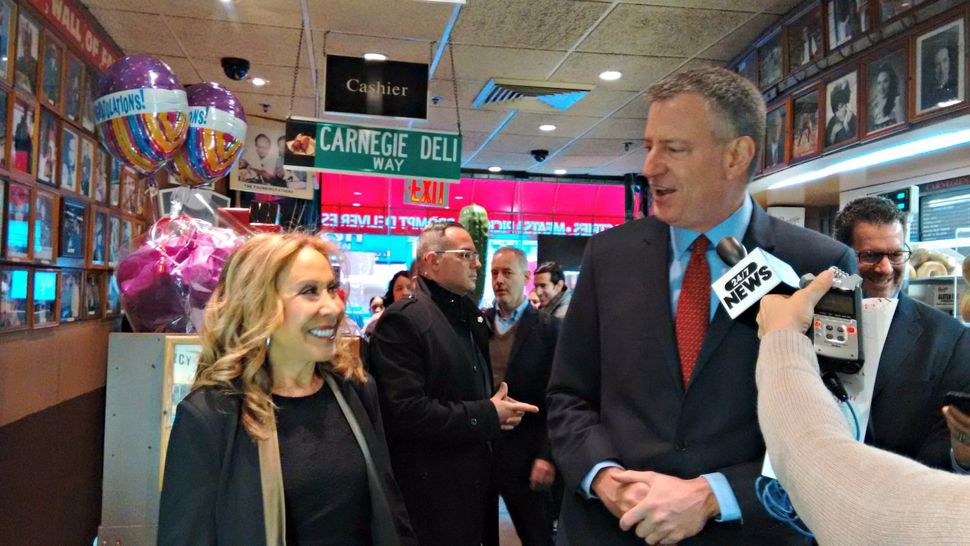 At least one fan at ’s official reopening ceremony this morning insisted that the legendary eatery makes “the best pastrami sandwich in the city.”

That’s Mayor Bill de Blasio, who beamed as he cut a ceremonial cheesecake while the deli’s second-generation owner, Marian Harper, looked on.

“Thanks for restoring this jewel in our crown,” the mayor told Harper as the two stood before a throng of media and VIPS, including food doyenne Mimi Sheraton and Sopranos actor Dominic Chianese. “There was a hole in our hearts. And now we can eat the whole sandwich again.”

Harper herself choked up as she thanked her staff, the city and the power company for their support during the deli’s 10-month shutdown — an eyebrow-raiser, since the city’s Department of Buildings ordered the shutdown after Con Ed detected illegal gas hookups last April. Harper’s annus horribilis also included a messy, very public divorce from Sanford Levine, who had taken up with a Carnegie Deli server.

But the mood was jubilant as massive trays of pastrami sandwiches, pickles and cheesecake — at 9 a.m.! — circulated.

“It took us weeks to gear up for this,” Sarri Harper, granddaughter of the deli’s co-founder and Marian Harper’s daughter, told the Forward. “The past few months were financially devastating. It was very difficult. But we’re over the moon now. This is my grandfather’s legacy, and he’d be proud.”

Most of the deli’s original staff has returned, though Harper wouldn’t comment on whether employees were paid during the closure.

Marian Harper had the last word after the cheesecake-cutting ceremony. “We’re going to keep this going for a long, long time,” she said.