The Coney Island hot dog vendor is celebrating its 100th anniversary this year. Image by Courtesy of Nathan’s

I have always lacked both talent and interest in athletics, making many “fun” Fourth of July activities (anything involving physical exertion) not so “fun” for me. However, this year, I looked forward to taking part in a very unique sporting competition: the Nathan’s hot dog eating contest.

The Fourth of July weekend was one in which everyone in America celebrated our independence, usually by drinking too much beer, wearing not enough sunscreen and wearing cheesy patriotic outfits. We pigged out (literally) with family and friends, stuffing our faces with traditional American food such as pasta salad and hamburgers.

Did you know you can get tens of thousands of dollars just for eating a lot of traditional American food? Thousands of people on Coney Island celebrated a century of Nathan’s Famous on the Fourth by watching as 20 intrepid eaters competed in its annual hot dog eating contest. The contest started back in 1916 when the stand opened, as four immigrants were trying to see who was the most patriotic. This competition has spread internationally, and even China had its own Nathan’s Famous hot dog eating contest. 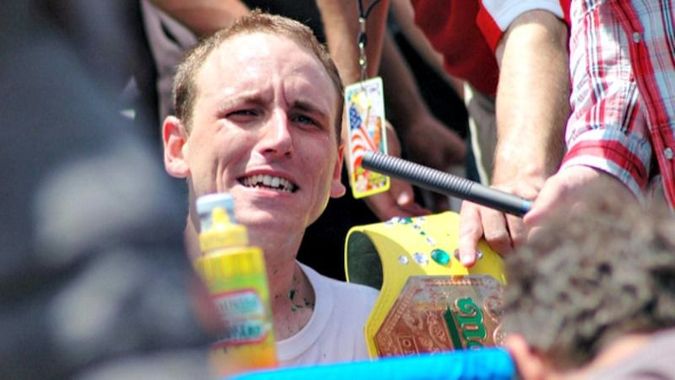 This year, Joey “Jaws” Chestnut won his 9th title. Imagine how many hot dogs he’s eaten in his life… Chestnut quit his job in construction management to become a competitive eater, and the 32-year-old apparently receives over $200,000 a year from public appearances, sponsorships and prize money.

Although we may think of Nathan’s as just a delicious frank we consume at family barbeques, Nathan’s actually has a very interesting history. One hundred years ago, Polish Immigrant Nathan Handwerker opened up a hot dog stand on Coney Island with his wife’s secret hot dog recipe, according to the history on the website. Hot dogs were only a nickel back then, and he opened up the stand with a $300 loan from two of his friends. Business boomed immediately, and they opened up other stands in Times Square and Yonkers. Al Capone was a regular customer, and in 1939 the Queen and King of England feasted on Nathan’s Famous dogs. A century later, Nathan’s Famous can be found in supermarkets across America, and products can be found across the globe.

As for me, I didn’t end up making it to the contest. I guess I’ll have to wait another year to see if I finally found my sport.

P.S. The hot dogs are not kosher, but that doesn’t mean they’re not American!