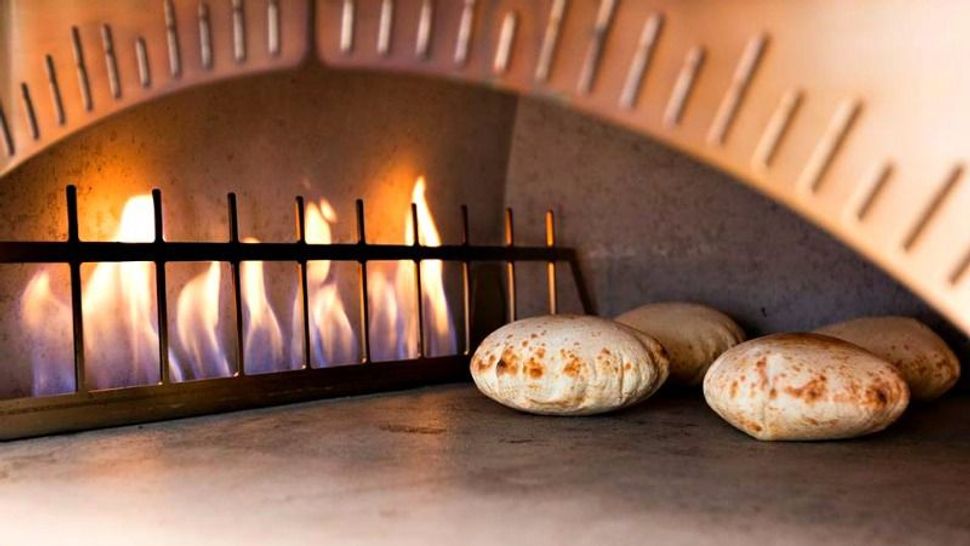 Pita baking in the oven at Sababa. Image by Facebook/Sababa

The first thing that caught my eye when I entered the new Sababa restaurant in San Francisco was an old advertising poster for Jaffa oranges — showing an Arab orange vendor sitting on a blanket smoking a hookah with a fellow Arab who has ridden up on a donkey. It harkened back to a different time, before Israel was Israel.

But then something brought me back to the present — the guy making pita. He’s got a system: He takes balls of dough and drops them into a sheeter usually used for pizza dough. The rounds then go onto a pan and into an oven, one with high, radiant heat perfect for baking pita. They come out in 90 seconds, “beautifully blistered and perfect for our needs,” says Guy Eshel.

So, when you get a sandwich on a pita at Sababa (subtitled “Hot Pita Bar”), the pita will be hot. And fluffy. And uniquely puffy. As well as delicious.

Eshel is chef-partner of Sababa (a slang word that in both Hebrew and Arabic means something along the lines of “cool” or “awesome”). Eshel is making a bold statement that while San Francisco certainly hasn’t lacked for falafel joints, many use pre-made mixes, and when you order it, it might have been sitting out for a while.

Not at Sababa. Lines have been out the door since it opened at 329 Kearny St. in the Financial District in May (11 a.m. to 3 p.m., weekdays only). Each batch of falafel is made to order. 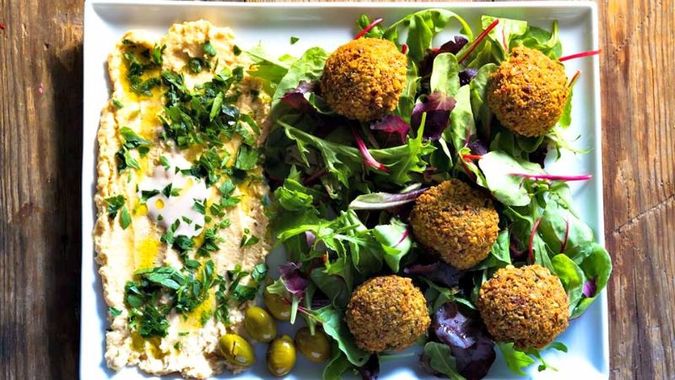 Falafel at Sababa Image by Facebook/Sababa

“There’s Oren’s Hummus [in Palo Alto and Mountain View], but it’s kind of crazy that in such a food city like San Francisco, where people love all different types of food and love finding the next best thing, there wasn’t a great falafel place,” says Eshel, either unaware of or conveniently ignoring 18-month-old Flying Falafel on Market Street. “It was almost pretty evident that this needed to happen.”

Eshel, 25, was born and spent his early years in Israel, in Tel Mond, southeast of Netanya. His parents moved to the Boston area when he was 7.

His family enjoys food, but no one was passionate about cooking. Yet the Food Network drew him in as a teenager. When his mother needed leg surgery and was incapacitated for a while, Eshel found himself stepping in to cook for the family.

“This was around the same time when you decide where you’ll go to college,” he says. When he looked at the Culinary Institute of America in Hyde Park, New York, “I instantly knew this is what I want to do.”

While attending CIA, he worked with an Israeli family who had two falafel stands at local farmers markets.

“That’s the first time I realized that this food is really popular with Americans. You just have to do it right,” he says. “Most falafel in the United States is not that great, there’s not a lot of effort put into it. But this was the closest I had seen to Israeli falafel, and there were always huge lines. It stuck in the back of my mind.”

Drawn by the weather and Bay Area food culture, Eshel moved to San Francisco after graduating and took the fine dining route, working at One Market and then at AQ.

During his four years at AQ, chefs took turns cooking staff meals, which often meant food from their heritage. Eshel’s night became known as “Mediterranean Mondays” and the staff liked what they ate.

Matt Semmelhack, owner of the Mercer Restaurant Group that owns AQ and other restaurants, often joined in for the staff meal. When he complimented the food that Eshel had cooked, the chef joked, “Well, actually, I’ve been working on a business plan.” Over the next two years, they worked on the concept, testing it out with a series of three slickly executed pop-ups (at Adam Mesnick’s popular Deli Board) 15 months ago.

Eshel is Ashkenazi, but the Mizrachi condiments that are so ubiquitous in Israel — the pungent Iraqi amba and the spicy Yemenite z’hug — are both available at Sababa. He also has pickled cabbage, popular in Eastern Europe.

He also is making a fabulous chicken shwarma, beef kofta and eggplant sabich, and numerous salads such as traditional Israeli tabbouleh, Moroccan carrots, beets with labneh and roasted cauliflower. And hummus, of course. Everything can be ordered in a bowl, but with that divine pita, why would you?

Eshel says he plans to open several more Sababas in San Francisco. The first one got a little boost, he says, from a loan from the S.F.-based Hebrew Free Loan.

“They’ve been great and helpful, and the process was easy,” he says. Furthermore, “the Jewish community has been so helpful in getting this project off the ground. We’ve had a lot of Jewish investors contributing, too.”

Alix Wall is a freelance writer and personal chef in Oakland, California, and the author of the blog TheOrganicEpicure. This article was first published on jweekly.com.