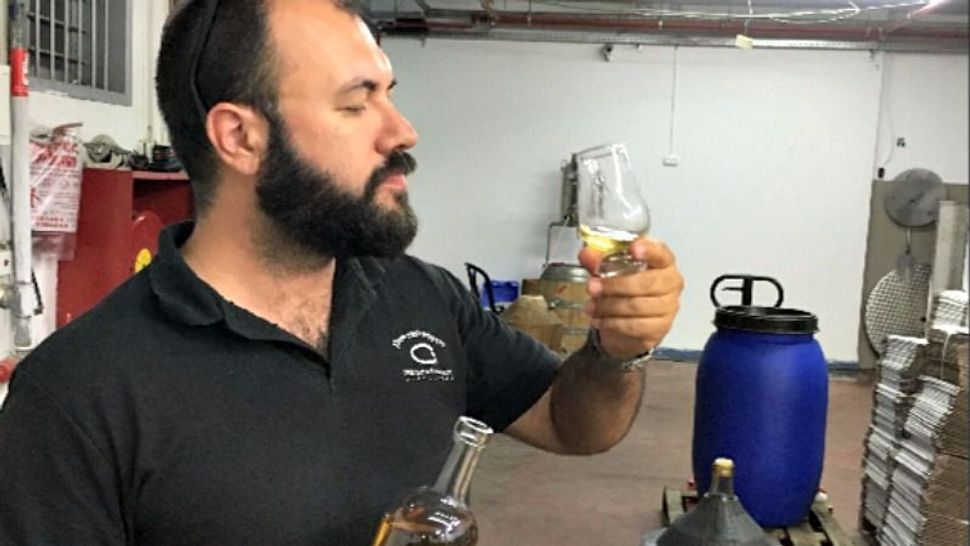 Image by Courtesy of Golani Whiski

Israeli whisky has arrived in America.

The Golan Heights Distillery from the mountains on the Syrian border is younger than Tel Aviv’s Milk and Honey — its domestic rival — but its finished product arrived in New York on or around Bastille Day (July 14), about a year ahead of the promised competition (whose three-year aged single malt will be, in fairness, a quite different product). That makes it, as far as I can tell, the first Israeli whisky ever to go on general sale in America. (Please let me know if you know better.)

The River distributing company imported the first shipment of 600 bottles and made sure the Forward was able to taste bottle 577. Which is, at barely over a year old, surprisingly, quite palatable.

If you don’t care to know the details of how distiller David Zibell (pronounced Zee-bell) was born in France, lived in Israel (in Tzfat) for a couple of years as a child, and then finally made Aliyah to Israel from Montreal in 2014 only to find himself living on top of a hill making a variety of liquors, then you can jump to the tasting notes at the bottom. But it’s quite a tale, and I’ll tell it quickly.

Zibell had been in real estate in Montreal when an opportunity came to him to move to Israel. So, with his wife and kids, he set off on an adventure in 2014. He and his wife hadn’t intended to move to the Golan but, he told me by phone, “Me and my wife, fell in love with the Golan, though it was totally unplanned. It was beautiful and it was affordable to purchase a home.”

Although he had a copper still for making whisky in his immigration container, he hadn’t thought that he’d become a professional distiller. He’d not cut his real estate ties and both he and his wife “had a bunch of ideas about making money.”

But when the equipment arrived he “started playing.” Zibell soon got positive feedback on his products and soon realized that there was a business opportunity. He put a lot of his own money into the project as well as taking out a small business loan and looking for crowdfunding on IndieGoGo His dream was to produce a world class whisky in Israel and his bet was not only that there was a market for the gin, whisky, arak and absinthe he could produce, but also that his little 150 liter copper pot still could keep going well enough to fulfil any demand that he could drum up.

Two years later, the dream is alive and the bet is on. In the next month Zibell will receive two custom made copper pot stills (one 1,000 liters and one 500 liters) ordered from Portugal nearly a year ago. These will allow him to triple production without running the little still that could 24 hours a day.

Golan Heights distillery takes the success of Israeli wine as an inspiration and is set up just a few hundred yards from Golan Heights Winery, from whom he gets beautiful wine barrels in which to age his whisky. Of course, this being Israel, the two neighboring manufacturers have different rabbis certifying that they are keeping kosher, but unlike most Jewish situations, the reasons are bureaucratic-historical (Katzrin district court and Katzrin municipal court dividing the spoils), rather than argumentative-politico-personal.

Two other things you should know. First that the water that he uses is the Salukia spring water which is bottled and shipped around Israel as “Water of Eden” (Mei Eden) — like Poland Spring in America. Second that the misty Highlands of Scotland may be ideal for a slow maturation but the intensity of the Middle East isn’t reserved for just the political theater, it also applies to the whisky maturation process.

Zibell insists that the whisky matures three times faster than in Scotland. That’s because it’s often hot which means that the Angel’s Share (the whisky lost to evaporation) is large (“Israeli angels are thirsty!” said Zibell) but the heat also “speeds the interaction between spirit and wood.” But the interaction within the cask is also accelerated because of the daily temperature changes which can be as great as from 100 to 60 degrees fahrenheit, and seasonal change: of course the Golan has “snow in the winter and it gets to 40 degrees [100 fahrenheit] in the summer.”

So what does all that interaction end up tasting like? 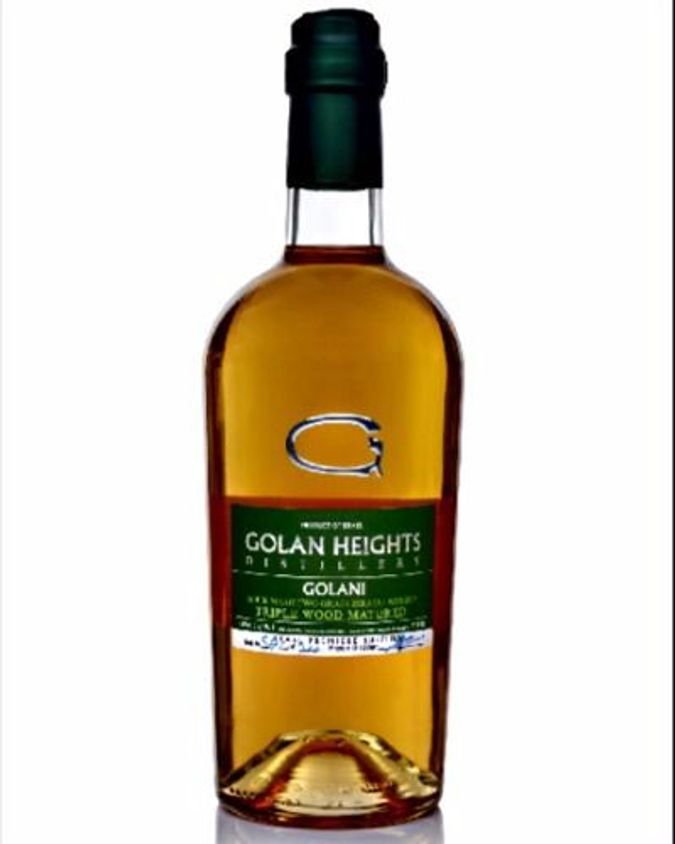 Image by Courtesy of Golani Whisky

Golani whisky is “three wood, sour mash, two grain whisky” which means that the spirit comes from distilling a fermenting mush (mash) made up of hot water, yeast that’s come from a previous batch (sour, which is usually an American tendency) and two different types of grain (barley and wheat), which is eventually matured in three types of wooden barrels (new American Oak barrels, plus barrels that contained chardonnay or cabernet). Golani is stored in for a remarkably short time before it’s decanted into its well-designed 750ml bottles, signed by Zibell and shipped off. Unlike single malts, which are properly 100% barley, this whisky uses local wheat to add its particular flavor (the barley is imported, ready malted, from Britain). Zibell told me that the wheat “mellows” the spirit and I was eager to see whether that was true.

The whisky’s relative youth and pale coloring made me fear the worst for its immaturity, but it lives well, filling out its 40% alcohol with a fresh raisin-y dimension. The crack tasting team that I assembled to test the bottle went further in the fruitiness, talking about notes of grappa or brandy. Indeed one member of the team, visiting from France, was so adamant that she fetched and opened a bottle of 15 year old aged Basque Armagnac for comparison.

And it was a valid contrast. The Golani isn’t as complex as anything that’s aged in advance of a decade, but the flavor profile has the jagged mineral fruitiness of an armagnac, tempered with slight notes of something woody, perhaps cedar. It’s reminiscent of the sweet Highland Park range without the creaminess or the Japanese Hibiki without the slightly chemical perfectionism. Most importantly there is no unpleasant aftertaste, as sometimes happens with young spirits. Like a grappa it leaves more of a refreshed feel than an actual flavor.

Is Golani going to replace our Lagavulin and Ardbeg in current pride of place in the Forward liquor cabinet? No, but it’s not intended to. At $35 it would be excellent value but its provenance and limited supply definitely gives it license to ask a premium. Which means that retailing for about $45 in the stores it’s still an excellent curio to bring to your kiddish clubs and your Friday night dinners.

Dan Friedman is the whisky correspondent (and managing editor) at the Forward.