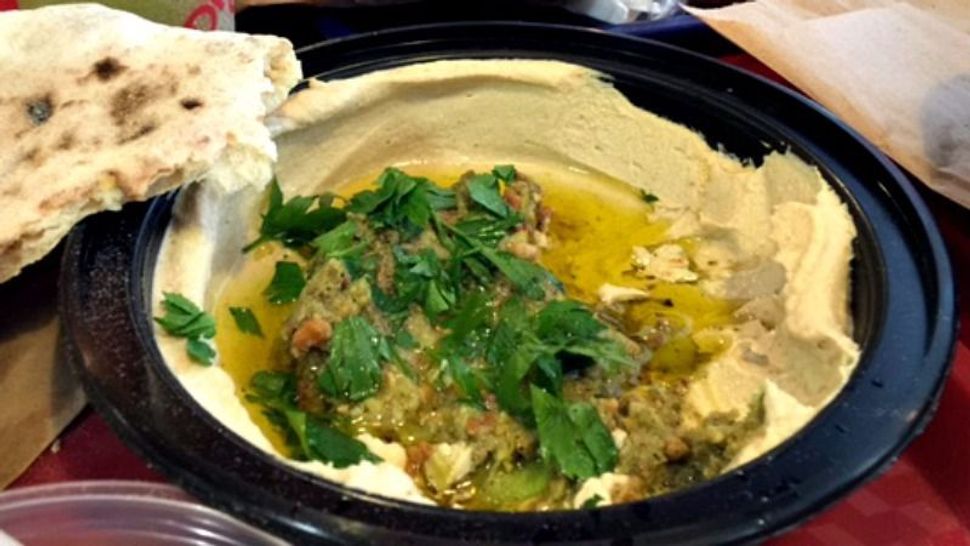 Hummus with favas at Dizengoff NYC Image by Liza Schoenfein

“First of all, it’s all delicious,” Mimi Sheraton said of the beautiful Middle-Eastern spread set before us at Dizengoff NYC — when we finally paused from our avid eating long enough to assess the situation. “Earthy, exotic, a very different flavor palate from what we think of in this country as Jewish cooking.”

The estimable food writer and former New York Times restaurant critic had joined me at Chelsea Market to have lunch at Michael Solomonov’s new hummusiya. 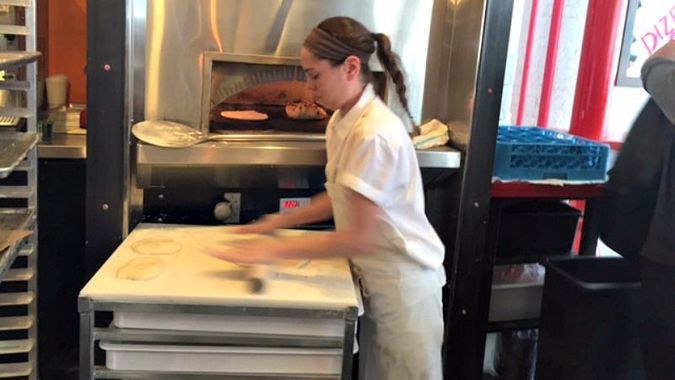 Pita being rolled and baked. Image by Liza Schoenfein

Sitting on tall stools at the crowded counter, facing the open oven where a steady supply of pita puffed and browned before us, we asked for two plates of hummus — one with fava beans; the other with ground lamb. Sheraton wanted to try the matbucha, a spicy tomato and pepper dish she said she loves, and I was interested in the pickled peaches. At a friend’s enthusiastic instruction, I also ordered the lemonnana, an intensely lemon-and-mint flavored Israeli-style frozen concoction. It was delicious.

Sheraton dipped her spoon in.

Because it felt like dessert, and I hadn’t yet had my lunch, I tried to limit myself to just a few sips. But it was so addicting that I ended up giving myself one of those sharp little front-of-forehead headache as I greedily slurped it down. Sheraton laughed. 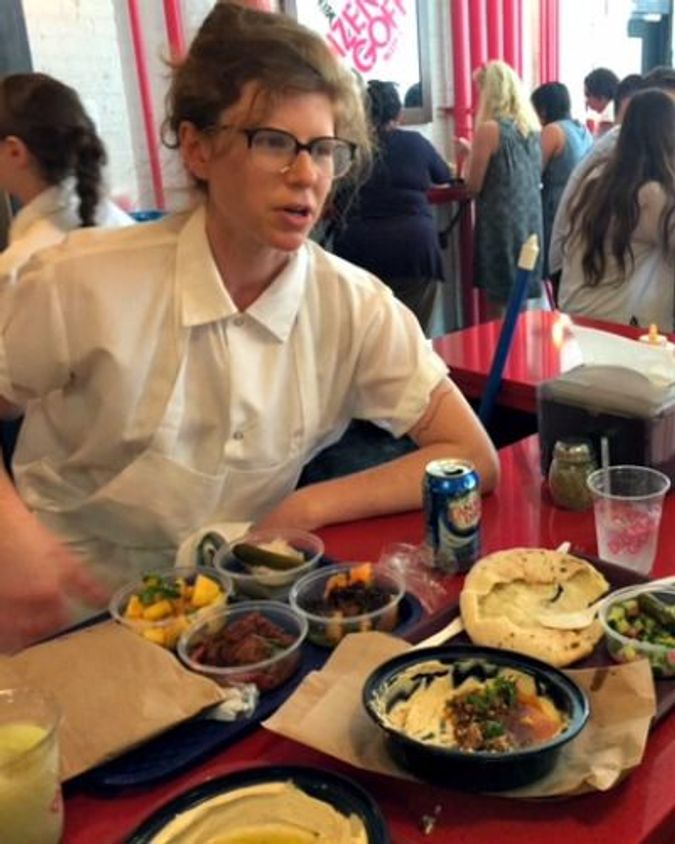 Our food arrived — the hummus and the two salatim we had ordered, along with the two others on the menu, which we hadn’t — pickled onion with sumac and melon dusted with an olive tapenade. The peaches were bracing and bright; the matbucha was deeply earthy and moderately spicy, rich with coriander; the melon, with its briny topping, was unexpected and excellent; and the onion was so mellowed by its marinade that we at first identified it as fennel.

“It has great appeal as a Jewish food,” Sheraton continued, “because it’s so much more healthful than the Ashkenazi food, though I like that very much having grown up with it. We used to have dairy restaurants in New York, and most of them are gone. They were totally based on cholesterol, there was sour cream and eggs and cheese and great cakes — just thinking about it is making me hungry — and suddenly there are now vegetarian kosher restaurants but they tend to be hummus centered — and pita and eggplant— much fore healthful, and I think that accounts for a lot of the appeal to people who observe kashruth.”

Executive chef Emily Seaman came over to chat as we ate. 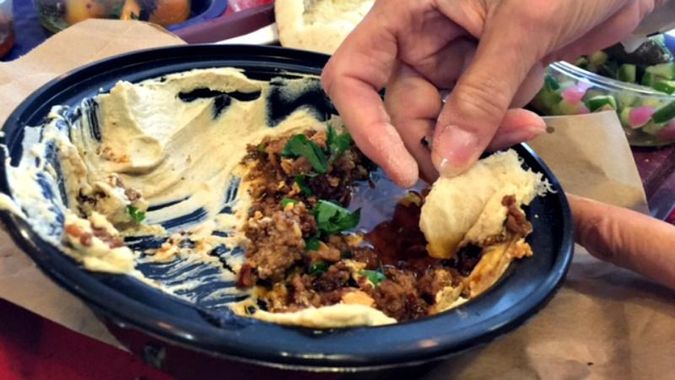 Hummus with lamb at Dizengoff NYC. Image by Liza Schoenfein

The two hummus plates had very different qualities. The fava was more subtle, a little nutty from minced pistachios and slightly piquant from a generous swirl of olive oil and lots of fresh parsley. The ground lamb one was rich and savory, deeply flavored with cinnamon and other North African spices, with added depth of flavor from toasted almonds.

Sheraton and I talked about the booming popularity of Israeli food in the U.S.

“Mediterranean food has always been popular, so Israeli food is easy to like for many people because they have been so used to the food from the other side of the Mediterranean,” she said. “The Israelis — with the Moroccan and especially Yemini influences — rely much more on spice.”

“Many of these flavors and ingredients look familiar, but whereas the [European] Mediterranean side is lighter and tends to have more herb flavors, it seems to me — in what may be a bit of a simplification but is no less true — that that there are heavier and spicier flavors on this side.”

To me, there’s something about this food that’s both terrifically simple and beguilingly complex. Sheraton’s right: The complexity comes from the spice, while the simplicity, I think, is in the good, simple ingredients treated with a masterful but light touch.

Sheraton and I have a lot to talk about. She’s the author of “Whole World Loves Chicken Soup” and “The Bialy Eaters” among other classics, and her latest, “1,000 Foods to Eat Before You Die,” has a robust Jewish section. Luckily, Dizengoff is only a few blocks from where she lives, and there’s more to explore on that ever-changing menu.