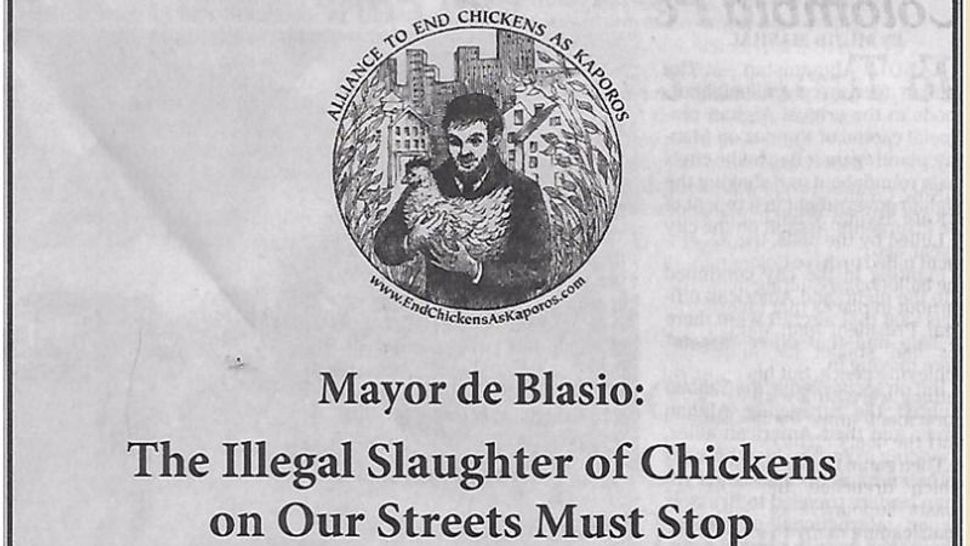 Image by Courtesy of the Alliance to End Chickens as Kaporos

Readers of Monday’s New York Times may have noticed a full-page ad with the headline, “The Illegal Slaughter of Chickens on Our Streets Must Stop.”

In an open letter to Mayor Bill De Blasio, the Alliance to End Chickens as Kaporos and Concerned Citizens of the City of New York demanded that the city “stop turning a blind eye to the annual, illegal slaughter of 50,000 chickens during a ritual known as Kaporos.”

Kaporos is a pre-Yom Kippur atonement ritual among the ultra-Orthodox, in which chickens are swung overhead as a means of transferring human sins to the birds.

Formed in 2010, the Alliance to End Chickens as Kaporos is a project of United Poultry Concerns. Its goal is to replace the use of chickens in Kaporos ceremonies with non-animal symbols of atonement.

While the Alliance was attempting to save the chickens, another group on Monday gathered to try to save the Carnegie Deli, which announced on Friday that it would close for good at the end of 2016.

A former deli employee, who now owns several New York restaurants including Sojourn and Vero, Samuel Mussovic, gathered a group in front of the famous deli on Monday to announce a “petition drive” and fundraising campaign. Mussovic hopes to raise $5 million, and said he would share a percentage of future proceeds with Carnegie owner Marian Harper Levine.