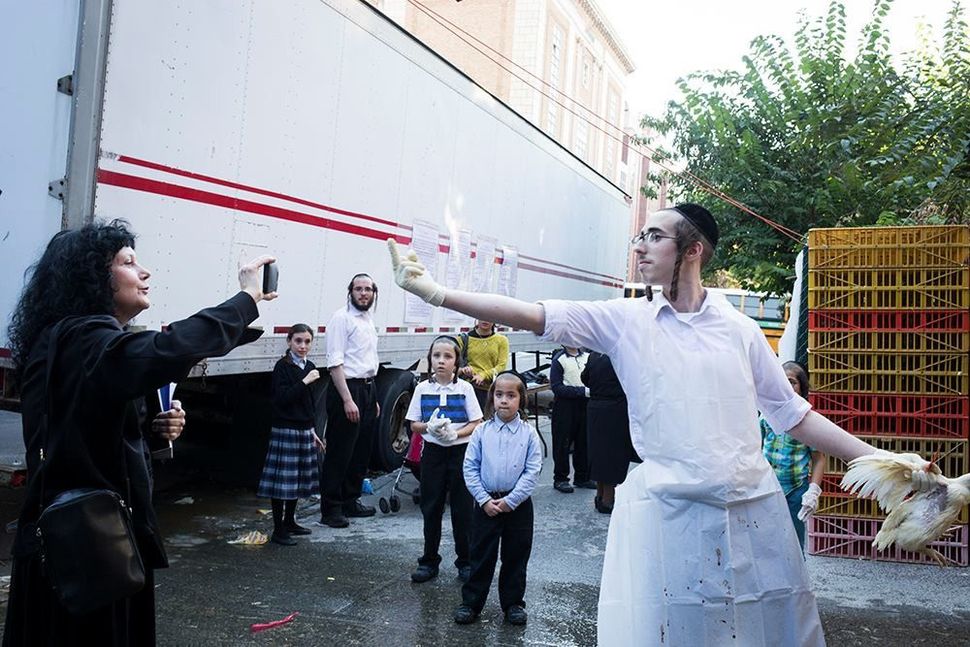 As Forward readers know, I have, on several occasions, criticized ultra-Orthodox/fundamentalist Jewish leaders for abuses of power, toleration of bigotry, failures to protect or educate their own communities, and selective manipulation of secular law to arrogate power to themselves and squelch the rights of others.

So, when a photo circulated this week of a Hasidic teenager, one hand grasping a chicken for the kaporos ritual, the other giving the finger to an animal rights protester, one might think I’d join the chorus of criticism of this latest instance of Haredi misbehavior.

But I won’t do so. In fact, the teenager is right, the animal rights protester is wrong, and my assorted liberal friends on social media who are approvingly sharing the photo (adding their own pious condemnations, of course) are even more wrong.

Kaporos is a bizarre, frankly embarrassing ritual that rabbis have tried to squelch for centuries. Stripped of rabbinic apologetics, it is witchcraft: A chicken is waved over a person’s head (three times, of course), and the person’s sins are cleansed. This is exactly the magical view of atonement which the prophets Isaiah and Jonah, and two thousand years of Jewish ethical monotheism, seek to uproot.

And yet, here it is, on the streets of Borough Park.

There are many reasons to criticize kaporos, or at least to reform it. Some Hasidic sects now perform the ritual with money instead of a chicken, and make a point of donating the money to the needy afterwards. (In some communities, the chicken is slaughtered after the ritual, and it, too, is donated.) And of course, most non-fundamentalists regard the entire thing as superstition.

That’s fine. Truthfully, I myself find something appealingly pagan about kaporos, and can imagine it being more cathartic – and thus more worthwhile – than most Yom Kippur services that will be held later this week. But surely, if there were ever an example of religious irrationality, this is it.

The trouble is that those who have lately taken to protesting kaporos are not doing so because of philosophical or theological objections – but in the name of animal rights. Like the campaigns to ban kosher slaughter, the drive against kaporos is ostensibly to prevent cruelty to animals – in this case, the unfortunate chicken.

But that is ludicrous – so ludicrous as to bely the animal rights activists’ claims themselves. Have these people ever been to a farm? Or, for that matter, a Latino neighborhood anywhere in New York? Chickens are routinely swung, thrown, kicked – I’m not saying any of this is justified, but I am saying that whatever suffering a chicken may experience in kaporos is chump change compared to practices that are commonplace everywhere chickens are eaten.

And they’re the lucky ones. In industrial farming in America, chickens often have their beaks scalded at birth to prevent them from pecking at one another. They live in appalling, cramped cages and are force-fed for their entire miserable lives. Disease is rampant, and chickens live in their own filth. And then finally, they are electrocuted, decapitated, or otherwise executed on conveyor belts.

For every one chicken waved over a hasid’s head in Brooklyn, literally a million suffer far, far more grievously in the American industrial agricultural system.

Oh, and then, thanks to our country’s outrageous attitude toward food waste, about half of them aren’t even eaten. Their body parts spoil, or nearly spoil, in supermarket refrigerator cases. Their barely-eaten carcasses are cleared away at hotels, restaurants, airplanes, conference centers – and then thrown in the trash rather than donated to soup kitchens, on the pretext of non-existent health regulations.

In fact, from an animal-rights, environmental, and food-justice point of view, the chicken that Hasidic teenager is holding is one of the luckiest, greenest, and most justly used farm animals on the planet.

So why are the protesters protesting?

Well, for one thing, kaporos is convenient. Crown Heights, Williamsburg, and Borough Park are all within biking distance of my apartment and those of Brooklyn animal rights activists. We don’t have to question the entire economic system that allows for our bubble of artisanal goods and affordable clothing, we don’t have to schlep down to Arkansas to protest Tyson Foods; I can just grab the 3 train and yell at Chabadniks.

But more importantly, kaporos is religious. And that’s what’s really bothering the do-gooder liberals who choose to spend their Septembers finding Hasidim to mock, deride, and ultimately judge.

If these animal rights activists wanted to protest the egregious violence our culture does to animals, they should stand outside not synagogues, but restaurants and grocery stores,: that mainstream which facilitates the industrial suffering and slaughter of chickens that was only marginally ameliorated by California’s recent legislation. But these backward Hasidim provide such an easy target: so superstitious, so weird, so “other.”

And yet, not too other. I can’t imagine any of the mostly-white English-speaking protesters standing outside carnicerias and protesting traditional Latin American methods of animal husbandry and slaughter.

But the Jews – well, they’re just right. Easy to mock, yet safe to mock.

If it seems I’m playing the anti-semitism card too casually here, read the comments and tweets accompanying the picture. “Omg… their hair!” “Finger to you, ugly, Jewish looser.” These are not from the activists themselves – in fact, one of them registered her horror at the anti-semitic comments on a thread I saw. But they are what invariably accompanies the scapegoating of Jews, whether by conservatives or liberals.

The great irony of those social media friends of mine? They’re criticizing religious superstition, but in such a judgmental, condescending and ignorant way as to seem dogmatic themselves.

Indeed, if the Hasid is making a scapegoat out of that chicken, progressives are making scapegoats out of the Hasid.

But, some of them might reply, it’s not just the chicken-waving – it’s also the finger. Isn’t this the height of hypocrisy, someone pretending to be religious but in fact being vulgar?

Actually, no. Sure, had the teenager been better media-trained, he wouldn’t have flipped off the activist taking pictures – not exactly public relations 101. There are also young children in the background; that’s not so great either.

But come on, he’s a kid. And this is New York. And while I don’t know if the activists were shouting or chanting anything, or just shooting video, it’s clear they weren’t there to admire the venerable Jewish ritual. They were there to protest, and the kid is telling them to f—k off. Not graceful, but not dissimilar to how I greeted the Westboro Baptist Church when they protested me one time. And not at all dissimilar, I suspect, from how most of us act, especially in the face of intense provocation.

No, what this is about is a naïve, ignorant view of what religious people are supposed to be like – especially religious Jews. Hasidim are meant to be quaint, charming, and deeply spiritual, like some sanitized Tevye the Milkman, or Yentl. They’re meant to pray at the Western Wall, not flip the middle finger.

And, indeed, in some simplistic view of the world, spiritual people are all supposed to be kind, soft-spoken and gentle-hearted, lovers of protesters and poultry alike.

What a load of crap. Spirituality isn’t about wearing Lululemon all the time: it’s confronting the beautiful and terrible realities of life head on, in the daytime and at night. And Hasidism, for better and often very much for worse, isn’t some fairyland of quaint pious Jews. It’s vibrant, extremist, enthusiastic, patriarchal, messy, diverse, worldly, world-rejecting, sexist, spiritual and deeply problematic. It’s complicated, in other words, and not reducible to some namby-pamby delusion of what religion is supposed to be.

For all these reasons, I’d like to join this kid, who I’ll probably never meet, in giving the finger to that whole thicket of ignorance and condescension: the assumptions that liberal ethics are the only ethics, the delusions of what religious people are supposed to be like, and, most of all, the huge self-delusion that a few dizzy chickens in Brooklyn represent a significant part of the effort to secure justice and compassion for non-human animals.

In my opinion, swinging chickens does not bring about atonement, catharsis, or release. But a little reflection might help, if we stop judging long enough to try.