Why Do We Keep Dissing Chabad’s Spirituality? 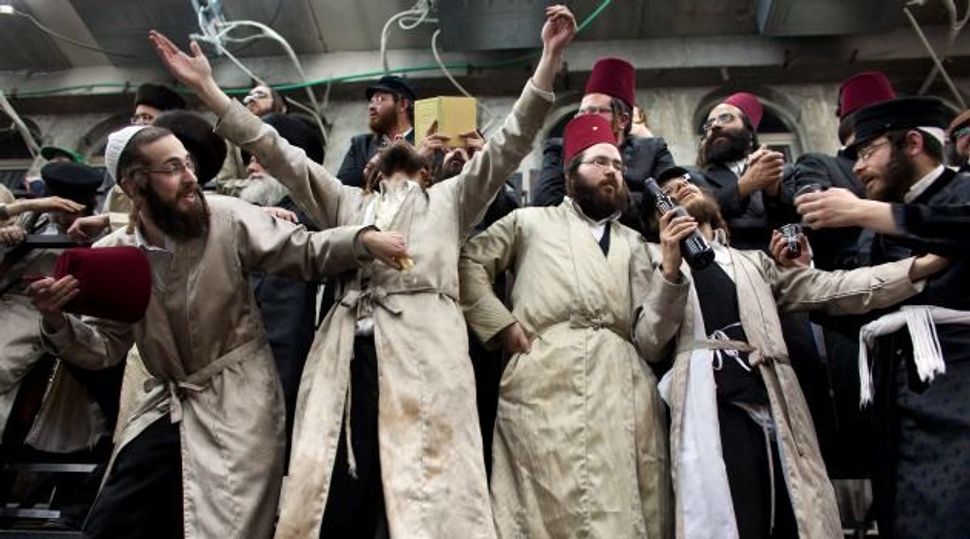 It’s been a year since the Pew Research Center released its “Portrait of Jewish Americans.” I haven’t counted how many words have been written about the report since that time, from the Forward’s e-book to endless handwringing by the OJC (Organized Jewish Community). But somewhere along the line, Pew definitely turned into Phew. As in, Phew, thank God that’s over.

But I’ve been struck, over the year of reflections and recommendations, at the relative absence of my own primary “vector” of Jewish engagement: spiritual practice.

One example, which I came across because its author and I are acquaintances, is Rabbi Dan Smokler’s excellent strategy to attract Jewish college students. (Dan’s piece matters more than most, since he is chief innovation officer at Hillel.) I am on board with his six-point plan: social groups, Jewish mentors, encounters with different kinds of Jews, Torah study, the Jewish calendar, and Jewish service. All good.

But Dan waves off the successes of Aish HaTorah and Chabad on campus, saying “most Jews are unlikely ever to move into any sector of the Orthodox camp.” That may be true, but it’s still worth asking why these groups succeed in the first place.

Surely, the odds should be stacked against them. Chabad shlichim are generally quite sincere, open and friendly. But they often look funny, talk funny, and do funny things like put tefillin on strangers. Their practices seem out of step with contemporary mores in many areas, not least the different privileges accorded to women and men.

And yet, as Dan briefly notes, they and other Orthodox/ultra-Orthodox outreach programs often do quite well on campus. Even correcting for the free food.

The fact is, there is something Chabad Houses offer that Hillels don’t: effective spiritual practice, and people who believe in its efficacy.

Note the word “effective.” Of course, Hillels, and mainstream synagogues, offer various forms of religious observance. You can sit (and stand) in traditional services all week long, if you like. But what do these services do, exactly?

Often, not much. Of course, there are many prayer groups with ruach — like the “fruity minyan” that Rabbi Smokler himself participated in at Yale. But often, these are not taken seriously by mainstream institutions. Maybe they meet once a month. The barriers to entry can be high. The kids are weird.

Meanwhile, the yoga classes are full, people are downloading mindfulness exercises to de-stress, and Chabad houses are often pervaded with a spiritual ‘energy’ that professionally-run institutions lack.

What will it take for mainstream Jewish organizations to take spiritual practice seriously?

How about demographic data? Does spirituality — meditation, prayer, whatever — attract and retain disaffiliated Jews? We don’t know. It’s rarely measured. I’ve got my anecdotes, you’ve got yours, but the truth is, the OJC doesn’t take it seriously enough even to measure it.

How about another kind of data? Meditation and yoga have been clearly established to improve immune response, decrease levels of cortisol (the stress hormone), decrease reactivity (i.e. lashing out, sending bad emails, saying stupid things), and heal serious conditions like PTSD and depression. There’s not as much data on prayer, yet, but can a Jewish chess club make these kinds of claims?

Or how about this: spiritual practice is what disaffiliated Jews expect to find in Jewish spaces. For institutional Jews who have drunk the grape juice, bonding with other Jews is a self-evident good. Not so, however, for Jews (especially younger ones) who have grown up multicultural, multi-religious, and post-tribal. Why would such a young person go to a Jewish social club, as opposed to a non-Jewish one?

Personally, I’d prefer the non-Jewish one. You meet more diverse people, for a start. No arguments about Israel. And you don’t feel like you’re joining some sort of cult, in which paid professionals entice you to join a group for reasons unclear even to them. Let’s face it — Jewish spaces can be creepy.

Unlike many (most?) employees of the OJC, disaffiliated Jews are not super-interested in Jewish continuity or Jewish peoplehood. If they get interested in Judaism, they’re more likely to be drawn to its ethical and spiritual aspects — you know, religion. Which is what they think Judaism is.

This “religion” doesn’t have to have anything to do with the traditional God, Torah, and Mitzvot. It might be a Heschelian praying with your feet, “doing Jewish” by fighting for social justice. It might be a secular, Buddhist-derived meditation retreat. But it is more likely to have something to do with the unique “product” that Judaism offers. Not sociality, not culture, but spirituality in its broadest sense.

This is what religions, Judaism included, offer. And it is what people interested in religion are most likely to be looking for. Go into a good Chabad House on Shabbat and you’ll find connection, love, enthusiasm, joy, singing, noise, and even some people who feel themselves to be communing with the deepest Source of their lives. Go on a Jewish meditation retreat (why yes, I am teaching one next month, thank you for asking) and experience a profound silence that changes lives and opens hearts. Go to many shuls and Hillels and you get cookies.

To be sure, there are many people who would greatly prefer pareve cookies to weird spirituality. There is no one Jewishness that is for everyone. And “spirituality” itself is a broad, vague, and unfortunate term that conjures up irrational beliefs and uncomfortable woo-woo. Often, the way it’s delivered makes me cringe.

But that’s not how organizations like the Institute for Jewish Spirituality, or synagogues like Romemu and B’nai Jeshurun, or most Jewish spiritual teachers see it. They see Jewish spirituality as a set of technologies of the soul that can promote spiritual wellness: making life happier, calmer, more inspired, more connected.

If only the OJC saw it similarly.

Why Do We Keep Dissing Chabad’s Spirituality?