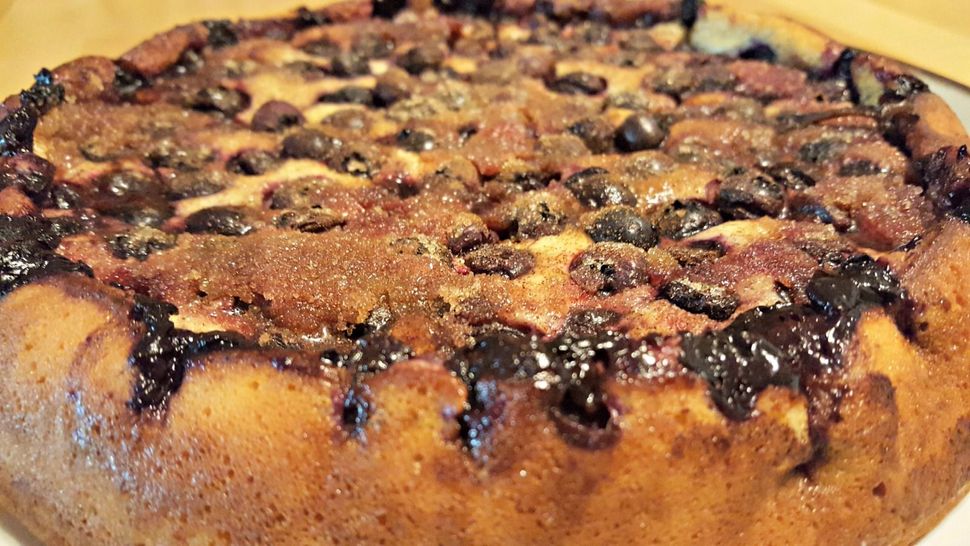 I wasn’t raised Jewish but I did marry a wonderful Jewish man. One of the big ways I try to connect to his Ashkenazi background is by exploring and reproducing the comfort foods that make him tick. (The day that my mother-in-law openly bragged about my kneidlach remains one of the proudest moments of my life.)

I’m also constantly looking forward to the next holiday, when I have an excuse to go a bit over the top or look for things that will really shine. Last year’s Rosh Hashanah found me rolling bits of chopped apples into my challah strands and macerating apricots overnight in honey and spices for my cake. Last Hannukah, I didn’t just make latkes, I made the applesauce from scratch.

The whole point of this introduction is to explain why at eight in the morning in the middle of August, I was sitting in my apartment, holding a fork and yelling “Shavuot!” at one of my cats.

I’d made a breakfast blueberry ricotta cake the night before and after my first bite I knew this was something that needed to be trotted out again for a special occasion. Smothered in fruit and half-melted cinnamon sugar, the cake itself is melt-in-your-mouth creamy and not too sweet. It’s also beautiful and deceptively simple to make, and as I discovered when doing some nutritional calculations, it’s not even a particularly unhealthy breakfast. (Well, it’s healthier than a stack of pancakes covered in maple syrup, anyway.)

I knew in a flash that I had found something that would be in good company with the blintzes and cheesecake of Shavuot, a light and fluffy sibling that would make a perfect start to the day.

Clara Drew is executive assistant at the Forward. Contact her at drew@forward.com.