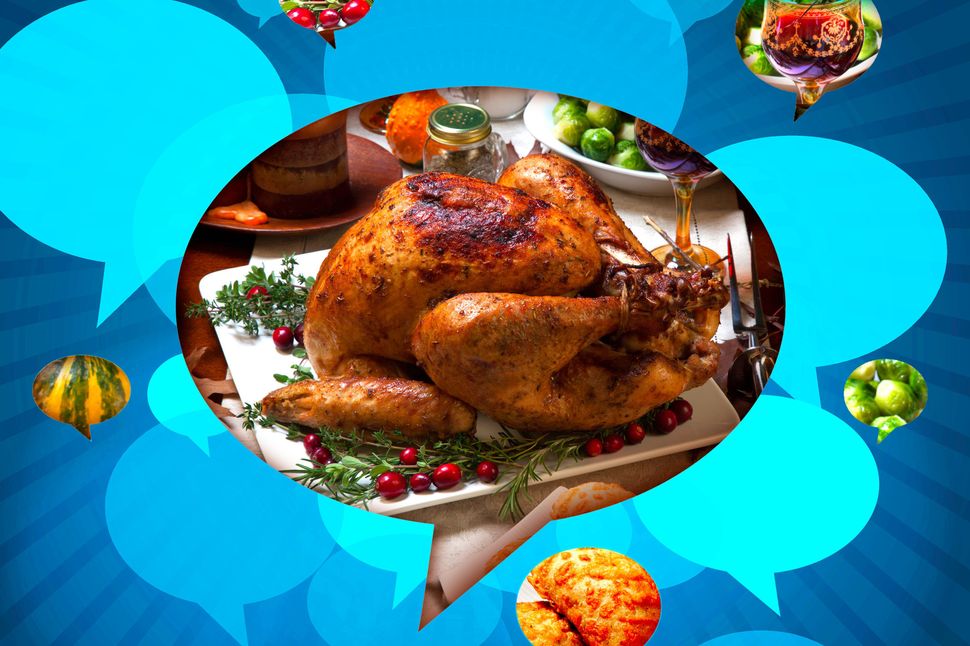 The following story, posted a year ago today, is as relevant now as it was then.

As you’ve doubtless heard, the citizens of these (decreasingly) United States of America are freaking out about Thanksgiving this year, worried they’ll find themselves trapped at the table with relatives whose political points of view are painfully opposite their own.

But before this issue reared its head, some of us were already beginning to fret over the holiday. Not the politics, but the feast. Because in this age of dueling food allergies and dietary restrictions — vegan, pescatarian, gluten-intolerant, peanut-free — it’s become harder and harder to satisfactorily serve a crowd.

Share Your Thanksgiving Menu Conundrums — and Solutions — With Us!

At a recent James Beard Foundation gala, I was chatting with the organization’s executive vice president, Mitchell Davis, author of books including “Mensch Chef: Or Why Delicious Jewish Food Isn’t an Oxymoron,” and the topic turned to this increasingly common conundrum.

Davis told me that this year, his holiday was becoming all the more complicated, because a kosher-observant family was entering the mix.

Davis and his husband spend every Thanksgiving in Maine with a couple who are both doctors. (The wife and Davis’s husband were medical-school roommates.) “We cook up a storm all weekend,” Davis said. “We all love to cook and eat.”

This year, the third med-school roommate is coming with her husband, their two daughters and a set of parents, all of whom are kosher (along with a sibling who is not).

“We love them all, but the kosher guests have added some anxiety to the menu-planning for our non-Jewish hosts,” Davis said.

What follows is the funny, food-loving, slightly frantic (and lightly edited) text exchange that ensued — on November 7 and 8 — while everyone was at work.

• Mitchell Davis (MD), of the James Beard Foundation, and his husband NG
• CE, who went to medical school with NG, and her husband ME, both doctors in Maine. They are the non-Jewish hosts.
• AR, the third medical-school roommate, who keeps kosher
• RR, AR’s husband, another doctor, who also keeps kosher

CE I am cycling up re: Thanksgiving food anxiety. Can we schedule a call for sometime this weekend?

NG I don’t think your anxiety that is cycling up TODAY is about Thanksgiving dinner…I believe that is displacement.

CE True, but I’ve got to think about something other than the election. And someone just point out to me that Thanksgiving is in two weeks. And suddenly everything I want is forbidden.

NG I think there will just be more options. Like ‘Here are the beans with ham and here they are without….’

CE Ok. I needed that reassurance. Shall we let AR make sweet potatoes with marshmallows on top?

NG Yes. Because they will all eat that.

CE OK. I’m feeling a bit better. Now if you could just reassure me about the election.

NG I’ve told AR there will be treyf and non-treyf options.

CE But have you told her husband?

MD I think this year we need lots of good olive oil rather than all that Kate’s butter.

And we should render some duck and chicken schmaltz to use instead of bacon fat. We have duck fat than I can bring. Practice for our trip to Gascogny next year.

CE I have thought about the butter/oil stuff. Schmaltz ok. We have easy access to large tubs of duck fat here, though the birds are not kosher.

NG Is AR sending the kosher ??

CE She’s supposed to. But she still hasn’t told me clearly when she’s coming.

NG What size did we want? We can tell her to order. What was the final bird size chosen?

CE You decide. Should get bird plus at least one other piece of meat for another meal. And of course we’ll do some fish stuff while you are here.

MD What kind of dressing? Cornbread or plain bread?

CE No to cornbread.

CE I love pearl onions. Will get lots. AR will peel them!

MD Ha! Have her send a couple of kosher chickens, too. For the fat.

NG WHEN DO YOU WANT THE TURKEY THERE? How big chickens? Don’t leave details to chance.

CE MD to answer that. We have a second fridge in the garage.

MD Must be there by Sunday. Two to three days in fridge.

CE I think that means MD should escort the poultry up here himself and arrive well in advance. ?

Also should have some unsweetened almond and cashew milk on hand.

MD Not bad for certain things. Custards and such. I prefer them to soy.

CE OK. I am starting to make a shopping list and will make my first pass at the store this weekend. Let me know as you think of other things.

MD I think we should think about doing a butternut squash soup. Rich and creamy without butter, etc.

NG CE we should have gone to a Christian medical school.

CE No. No. No. You’re kidding about the soup, right? I love soup like that. But it can’t be possible without the good stuff.

MD Yes it can. The one I did with Laurent Gras for our book was awesome. No dairy. We will need to make a kosher chicken stock with the chicken bones.

CE I can do that before you get here. Assuming the birds arrive in time.

NG That’s why I have some extra days.

ME What about lobster hash?

NG MD can we do a brisket hash and a lobster hash? MD there will be plenty of spud chefs. Perhaps too many. That is the problem.

CE We can rotate.

I invited MD and NG to join us on either end, in case we need to carve out separate time for some all-out eating. Like stay in some inn with Michelin starred restaurant….unless Trump wins, the economy tanks and we flee to the woods of Quebec, wherein trip will be canceled.

NG Our bedroom already prepared at MD’s sister’s in Toronto. Lots of hospitals there.

MD Ingredients for Laurent Gras’s wonderful butternut squash soup (we should double them):

For the butternut squash soup:

NG Yeah…so…the smoker has had a lot of treyf. Can we symbolically kasher it? Can it just be heated to some insanely high temperature for an hour or something the day before we start cooking? MD what’s the actual rule here? I can do a sidebar with AR and ask her.

CE Everything in our kitchen is horribly contaminated.

ME Pork is king in our house. Let’s be reasonable people. I guess I could buy a new grate if I needed to.

CE But if ritual is therapeutic, I get it.

NG A ritual heating of the Big Green Egg will mean something to them.

ME I can get up to 800 degrees. Last time I did this I burned off half my beard and arm hair after opening it too quickly.

MD I think you sprinkle salt all over and cover some things with aluminum foil and say a prayer. Ask AR what level they will accept. Fire folks is not really a koshering technique. We are not talking sterilization, doctors. That’s a modern concept.

The form of “contamination” is about faith, not germs or biology.

NG I remember the photos of your beard!

ME Should I buy a new cast iron grate? I have kind of wanted one anyway.

MD Then yes. And some aluminum foil roasting pans or something like that.

NG Are you asking if that will make them feel better or are you just looking for an excuse for a new grate?

ME Both. A cast iron grate gets you better sear marks on your steaks.

Just to confirm we don’t need to buy special salmon, right? I’m going to be smoking some ahead of time and will use clean grate.

MD Correct, salmon is pareve. Doesn’t need to be kosher. N, I only want salmon that you two have wild caught in Maine.

ME And you can eat dairy with it, right?

You can also eat meat with it (but no dairy then).

NG What I wrote to AR: So the Big Green Egg has had a lot of treyf on it. What do you want them to do? I suggested they run it empty at a very high temperature for several hours (ME can get it up to 800 degrees). Would that make your family (i.e. parents…) feel any better? AR’s reply: My parents are planning to eat treyf!

ME Hooray! I am still buying the new grate.

NG AR is saying her parents will eat everything. She is going to double check. Thinks we are going overboard. From AR also: Their daughter has been discussing MD’s biscuits. I can make them at home if he sends me the recipes too. I will never fit into my pants!

ME I strongly need biscuits. Maybe I’ll have to order a small ham to go with the biscuits, for those who want.

MD I’m afraid people will think you are a Jewish survivalist for all of the kosher meat coming to your place.

ME Remember I just put 20 pounds of smoked pulled pork in the freezer on Sunday.

NG Have you seen RR? He can eat.