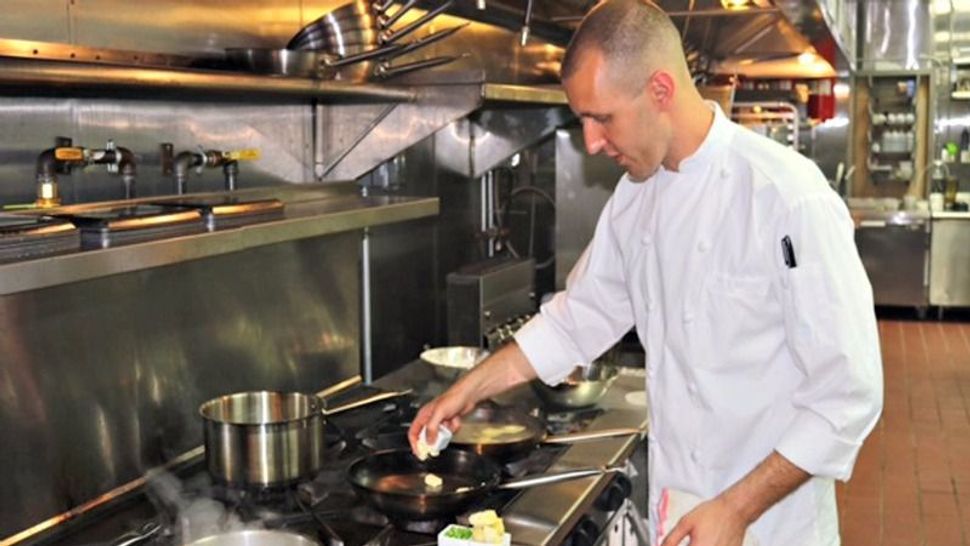 When he was a youngster, Moshe Grundman and his father, Chaim, would begin preparations for the Sabbath on Friday morning. They’d wend their way through Jerusalem’s Mehane Yehuda market in search of fresh produce and pastries for that evening’s meal. These memories that still bring a smile to Grundman’s face.

We’re sitting in his sleek new restaurant, Sixty5 on Main in Nyack, New York, on a gray, rainy day. The Hudson River views are spectacular, even through low-hanging clouds. As an added benefit, the vista provides a serene background for reminiscing.

“To be honest with you I didn’t think about the culinary world so much when I was younger,” said Grundman, 34. “I always had a passion for cooking because I saw a lot of cooking at home getting done. My dad was a big cook.

“He used to explain [to] me about his cooking. My mom used to explain me about her cooking. I never thought about getting involved with it professionally. But when I was in the army I started thinking about what I’m going to do after I get out.”

Grundman was a medic in the Shimshon or Samson unit of IDF, and one option was to go into a medical-related field. His brother is in medical school and a younger sister works for Mogen David Adom, Israel’s national ambulance service, so that wasn’t a stretch. Or he could pursue a cooking-related field.

Ultimately, Grundman took what was behind door number three: “Like all soldiers, the first thing you want to do after the army is have some fun and relax. Still at the same time you need to make some money, so I went to work as a security officer for a cruise ship.”

It was an Italian line, MSC, that hired IDF veterans, 10 aboard each vessel. Grundman became the official Jewish holiday chef. He’d prepare special meals for Rosh Hashanah and Passover for the security force with the Captain and other officers invited as well. After two years of sailing the world, he moved to Italy to live with his shipboard romance/Italian girlfriend, whom he eventually married.

“That’s when I got really deep into cooking,” he explained. His first exposure to non-kosher food came aboard the cruise ship, but it was his experiences in Rome that put him overboard.

“Experiencing all the flavors there [in Rome]. All the styles of cooking. The wines. The cheeses. The sausages. Different techniques they use to cook and cure meats and fish over there. I really got into this.”

It was an eye and taste-bud opening experience for a young man who’d lived by and large a kosher life. “Actually I liked it. It was delicious. Every time when I tasted something new I said, boy that’s really good and I want to try something new again.”

He got a part-time job working in a restaurant owned by his then wife’s distant relative. But Rome, where good jobs were scarce and expenses high, was an impossible city for a young couple. Since Grundman’s mother, Rachel, was born in Yonkers, New York, he had the bonafides to move to New York City.

There he enrolled in the French (now International) Culinary Institute, graduating in 2009 with honors. Although he worked in FCI’s one Michelin star restaurant, he was anxious to get out in the real world.

“I didn’t care where, I just wanted to start learning how to cook in a real restaurant,” he said. He got a job working the kitchen of Cafe Fiorello, a long-established restaurant opposite Lincoln Center in Manhattan. “After two hours working over there I realized I don’t know anything. I know the names of pots and pans. I do the names of the fish and the chickens. But for cooking I don’t know what I’m doing. I have no experience.”

He started off helping the butcher; the first day he butchered 300 chickens. He came home at the end of his shift, lay down in bed, closed his eyes “and all I saw was chickens,” he said.

But he was soon promoted to the kitchen, where he started at the salad station and soon moved up to cold appetizer, fry station and finally to the protein stations where he cooked meat and fish. After about nine months he transferred to another restaurant under the same corporate umbrella, the Redeye Grill, located ironically opposite another New York City music mecca, Carnegie Hall.

His next stop was the prestigious Oceana Restaurant, which ultimately proved a significant morale booster for the young chef — though it didn’t seem that way at first.

“I was working at the raw bar outside [in the restaurant proper] cracking oysters, looking at people working in the kitchen and thinking I’m never going to get to this level. Every dish that went out was tip of the top.”

It was a Gordon Ramsey level of pressure, “like being in the army. There were three sous chefs, a chef de cuisine and an executive chef all checking you, making sure that all was [perfect].”

It wasn’t until he was promoted into the kitchen itself that he recognized that he’d made the right career choice.
“I was assigned to the salad station and I said ‘Wow, I’m doing it.’ Then I moved to the hot appetizers and I was still doing it.”

Half-way through his five-year tenure there, the chef de cuisine called him and offered him a promotion to sous chef, a first-step managerial post and, considering Oceana’s sterling reputation, a career-making upgrade.

There followed several jobs, none as interesting or exciting as his time at Oceana, when one of his food suppliers, also an Israeli, told him some big money guy in upstate New York wanted to talk to him about opening a restaurant.

“Upstate New York? I’m thinking about forests and the border with Canada. But the guy kept telling me ‘call him, call him.’ So I did and he said we’re here in Nyack. I never head of Nyack before, so I Googled it and it’s not so far away from the city. I met the guy” — Grundman says he prefers anonymity — “and it was a beautiful space. There was nothing here but it was huge. He said, ‘you have the freedom to do what you want, just make good food.’”

Nyack is an artsy community with a lot of young people, a kind of suburban Brooklyn. The owner wanted to offer music, but not the EDM or rock available elsewhere. So on weekends now there’s live jazz or blues.

That inspired Grundman to try something different, too. Instead of traditional multi-course meals, he created casual share plates — small dishes that keep being brought out in succession: octopus (a house favorite, though not his kosher mom’s), fish tacos, falafel and hummus.

At Oceana, since he was the only Jewish sous chef, he was asked to prepare special dishes for holidays, a tradition he expects to continue at Sixty5 on Main.

He’s not sure what’s on tap for Hanukkah, but don’t be surprised if a serving of octopus is followed by latkes.