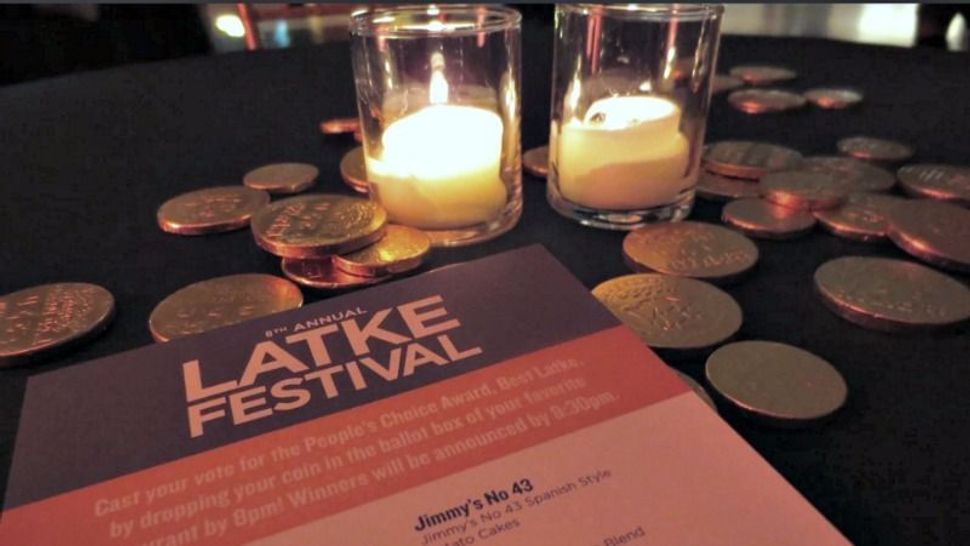 Hanukkah gelt glimmers on a table at the 8th-annual Latke Festival, which was held at the Brooklyn Museum. Image by Beth Kaiserman

When I first saw them, I knew.

I was drawn to their brown, crispy edges. I lurked by a big batch, hot out of the oven, debating my next move. Should I save the best-looking latkes for last, or dive right in? What if they ran out?

Chef Ryan Jaronik, of Benchmark in Park Slope, seemed cheerful — or as cheerful as you can be after frying latkes all day. The vibe was right. I was about to have the best latke at the 8th-annual Latke Festival.

This was one of the more serious moments of the event, which took place at the Brooklyn Museum Monday night. I was fishing for my second latke of the evening, and there were 19 crazy pancakes worth flipping for, made from potatoes and beyond. The event raised $3,100 for the Sylvia Center, an amount that was matched by an unnamed donor, according to Liz Neumark, founder of the center. Proceeds from ticket sales were still being calculated at press time, and will likely increase the original total tenfold, according to Shelley Clark, who handled press for the event. 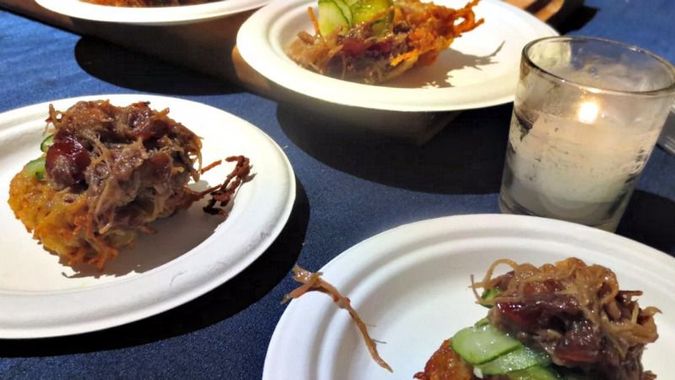 Jaronik’s latke ended up winning the judges’-choice award for best latke. His cranberry-and-juniper latke was topped with smoked duck-leg confit and spicy pickled cucumber. He brought his own convection oven to ensure that each latke was served warm and crispy. For me, it was those beautiful brown edges that sealed the deal, before I even saw the toppings.

“To me, a latke is a vehicle,” said Jaronik, who serves New American steakhouse-style cuisine at his restaurant. 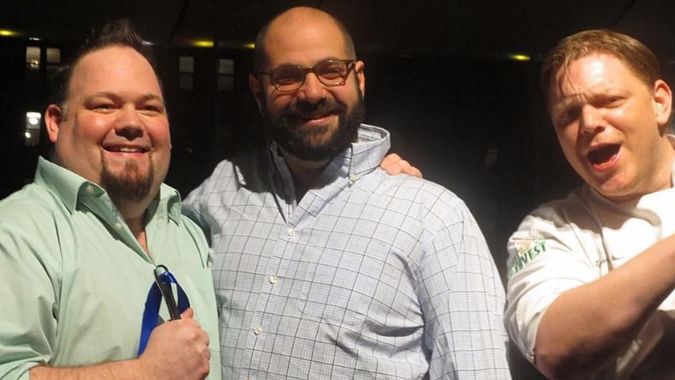 The people’s choice award went to Shelsky’s, a popular classic Jewish deli and appetizing store in Cobble Hill. The owners were energized about a potential win early in the night.

“We want to bring it back to Brooklyn this year,” Shelsky’s co-owner Lewis Spada said. 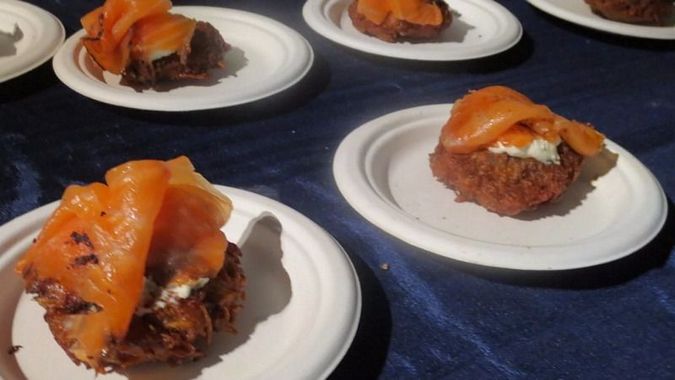 Shelsky’s caraway-seeded potato latkes had honey-mustard inside, and were topped with horseradish cream cheese and pastrami smoked salmon — a riff on one of their sandwiches. Image by Beth Kaiserman

Other fun ones included a maple-bourbon sweet-potato latke from Dizzy’s Club Coca-Cola at Jazz at Lincoln Center and a lemon-butter poached lobster latke (oy vey!) from Burger & Lobster. I’d say the crowd was buzzing the most about that one.

For breaks between latkes, there were a variety of drinks from Shmaltz Brewing, City Winery and a cocktail from The Bedford that was like a liquid latke: potato vodka, horseradish, lemon and apple cider.

It was the event’s first year at the Brooklyn Museum, and both the crowd and judges showed their Ruach (spirit) for Brooklyn businesses.