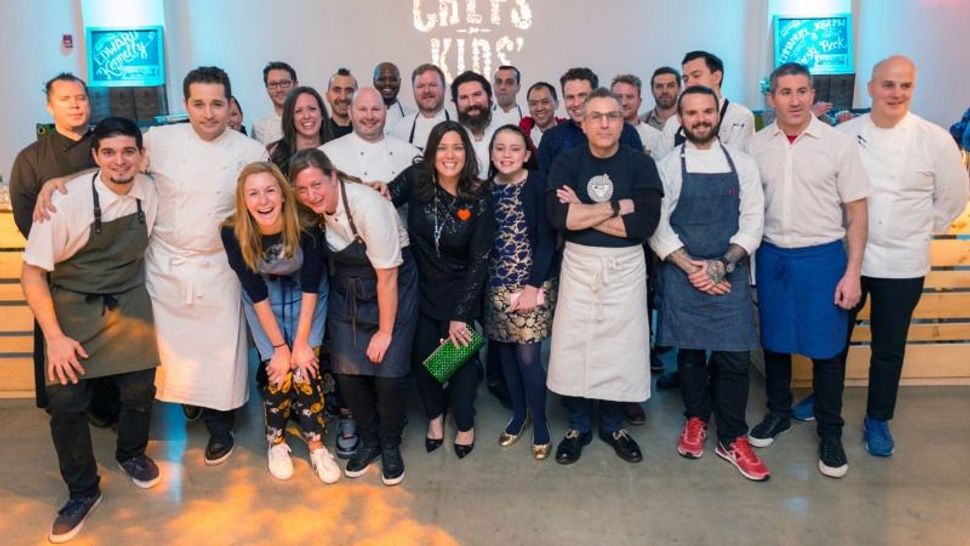 Among the lineup of star chefs at the Cookies for Kids Cancer benefit were Jonathan Benno (far right), Michael Solomonov (second from right) and Ivan Orkin (fourth from right). Cookies founder Gretchen Witt is front-center with green bag. Image by Daniel Krieger

I have an old friend named Fraya Berg, a longtime food editor and walking culinary encyclopedia, whom I met at the very beginning of my career in food journalism. Over the years, when we weren’t talking about food (or later about our sons — hers, Eli, and mine, Rex, were born within a year of each other), she would tell me about her great friend Gretchen Witt and Gretchen’s little son Liam, who was diagnosed with cancer at two years old. It was clear to me that “Aunt Fraya,” as she was known in Gretchen’s family, rose with Liam’s progress and fell with every excruciating challenge. Liam was six when he died.

Thursday night I attended the 4th annual Cookies for Kids Cancer Fundraiser, held at Metropolitan West, the old H&H Bagel Factory on 12th Avenue and 46th Street. At the event, called Chefs for Kids’ Cancer NYC, 28 top chefs volunteered to cook, with specific chefs assigned to specific donor tables. Three of the tables were designated kosher style, two with food by chef Michael Solomonov of the CookNSolo restaurant group — Zahav, Dizengoff — and the other one by chef Jonathan Benno of Lincoln Ristorante.

I asked chefs the same question: There are so many good causes out there. What made you decide to donate your time and talent to this one?

I was particularly struck by the intimate response I got from Benno. 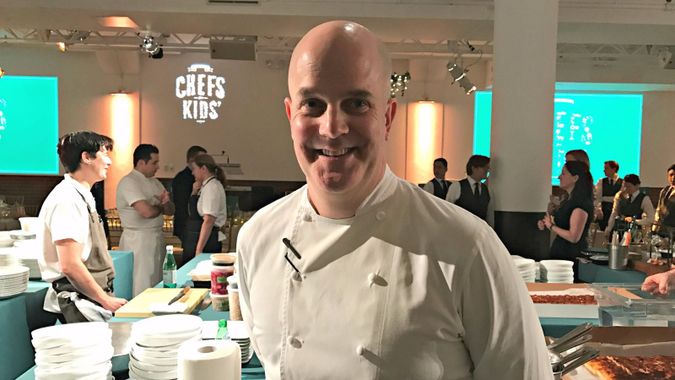 Chef Jonathan Benno of Lincoln Ristorante is a co-chair of the event and one of two chefs cooking a kosher-style meal. Image by Liza Schoenfein

“When Gretchen and Larry’s son, Liam, was in his final stage of chemo, he was going to Sloan Kettering, they used to stop by the restaurant to say hello,” he said. “I’ve known Gretchen for a long time, but unfortunately I only knew Liam for a brief time.”

After Liam’s death, his parents approached Benno and chef Dan Kluger of Loring Place, and asked if they would help with the the first fundraising dinner event.

“Dan and I helped put together a group of our friends to do the very first event and obviously things have grown since then.” 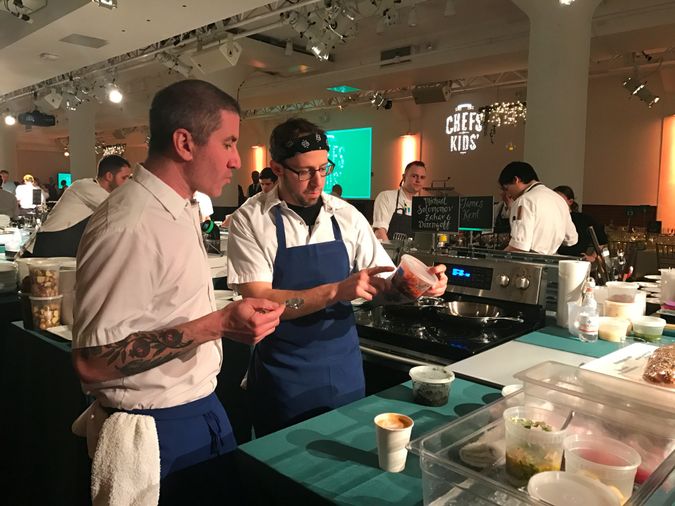 This year was Solomonov’s first.

“I’ve got kids, two boys, 5½ and 2½. It’s always awful — you don’t need to have kids to have that sort of empathy or sympathy — but it really makes it cut and dried and really tangible when you do have kids,” he said.

Other chefs at the event included Alex Guarnaschelli of Butter (and Chopped), Matthew Rudofker of Momofuku, Greg Rubin of American Cut, and my old friend Ivan Orkin of Ivan Ramen, who made two beautiful hors d’oeuvres for the event. 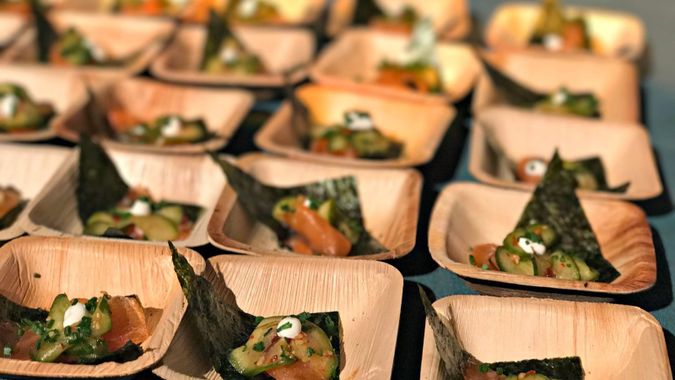 At the cocktail hour, one of chef Ivan Orkin’s hors d’oeuvres was shiso-cured salmon with nori, spicy cucumber and sesame. Image by Liza Schoenfein

“A lot of us have kids, and so I think — for anybody, but especially for parents — the idea of a child dying of a disease is really difficult to deal with,” Orkin said. “It’s kind of an overwhelming thought. So I think this one is an easy one. The structure of it is really nice, it’s about getting people pumped up to visit and commune with chefs that they’ve read about.” 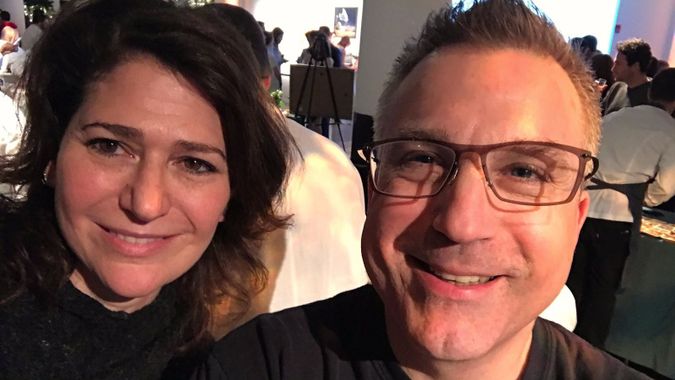 I was at one of Solomonov’s two tables — one of three tables sponsored by Shimon Shkury and Ruby Gelman. Solomonov started us off with a delicious cobia crudo — the fish was cured in beet juice and citrus and finished with a touch of the Israeli condiment zhoug. Next, there was toasted challah brushed with schmaltz and topped with a rich chicken liver spread (the chicken livers were donated by Grow and Behold). The main course was short ribs, also from Grow and Behold, slow roasted Yemini style with confit potatoes. 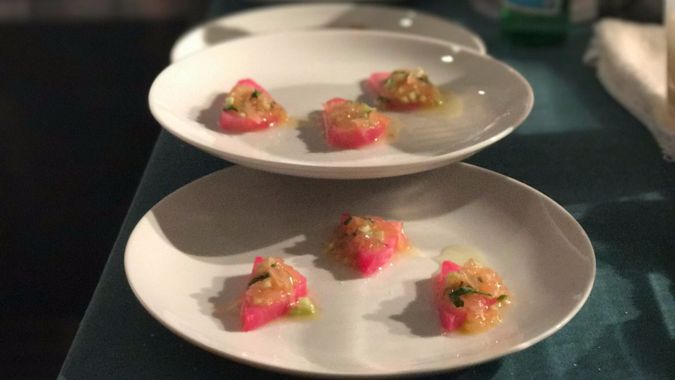 One of Michael Solomonov’s dishes was cobia crudo. The fish was cured in beet juice and citrus and flavored with a bit of the Israeli condiment, zhoug. Image by Liza Schoenfein

Why is it the organization called “Cookies”? Before Liam’s death, Gretchen baked and sold 96,000 cookies, with the help of 250 volunteers, raising more than $400,000 for research. “Word spread, and people nationwide began asking, “How can I help?” according to the website. The idea is that “everyone can be a good cookie,” whether by donating, fundraising, or buying cookies from the organization’s online shop.

At the end of the evening, each guest left with a big cookie jar filled with cookies baked by some of the top pastry chefs in the country.