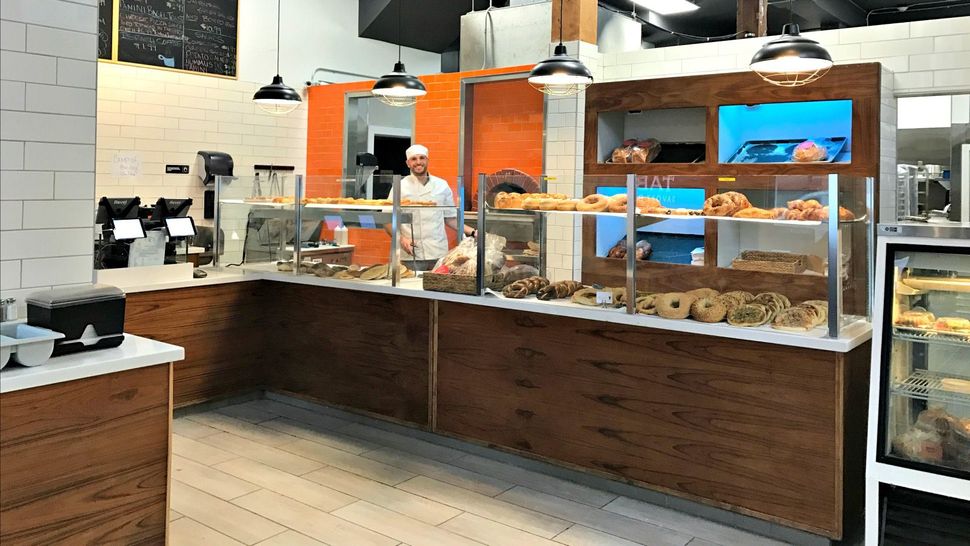 The inside of Frena Bakery 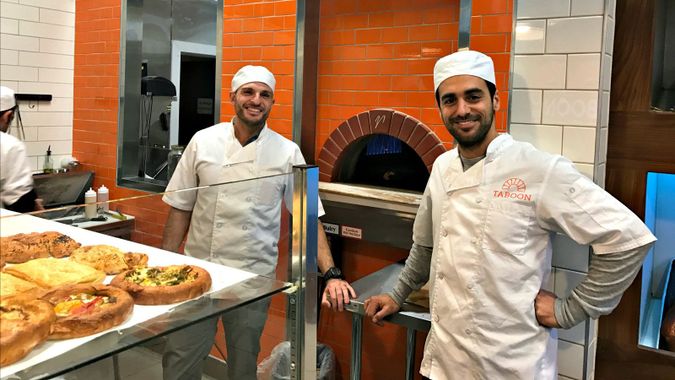 On December 25, 2016, the first day of Hanukkah, Maureen Krantz and her family made a special trip into the city from their home in Berkeley just to try the Israeli-style sufganiyot at Frena, San Francisco’s highly anticipated new kosher bakery.

“We had been hearing about it for weeks,” said Krantz, who is director of community engagement for Camp Ramah Northern California and keeps a kosher home. “We were so excited to go.”

When they got to the bakery, the lines were out the door. “I thought, it really smells like Israel in here,” she said. “I was transported. It was a wonderful, nostalgic feeling.”

At the front of the line, the family’s excitement was dashed slightly when they learned the bakery had temporarily run out of the Hanukkah doughnuts they’d come to buy. They nonetheless ordered “probably one of everything,” said Krantz, and “nothing disappointed.” Her mother-in-law, who grew up in Chicago in the ’40s, said the bread brought back memories of the Jewish bakeries she grew up with.

Krantz’s rave review is just what owner and founder Isaac Yosef wants to hear. But he doesn’t want Frena to be just the best kosher bakery in the Bay Area — that’s not a challenge, with Oakland’s Grand Bakery now closed, and Izzy’s Brooklyn Bagels 35 miles away on the Peninsula.

No, Yosef wants much more than that: He wants Frena to be the best bakery, period.

Located on Sixth Street at the corner of Minna, a short block from Mission Street, Frena is the first of its kind in the Bay Area, possibly in the United States, Yosef said. That’s because in addition to offering the sweet items one might expect, it focuses more on savory products — common in a typical Israeli bakery, but unusual in the United States.

“American bakeries have good things, but it’s all the same: croissants, muffins, brownies, cookies and cakes, but no food, maybe a sandwich,” he said.

And those savory products smack of his home in Israel. Pride of place is given to the bakery’s sambusak, Iraqi pastries with savory fillings. Eight varieties range from an decidedly un-Israeli pesto mushroom to the more traditional filling of feta and green olives ($6.99 to $8.99). Then there are borekas ($1.99 for small, $6.99 for large), Turkish puff pastries with fillings like mushroom, spinach, or the Middle Eastern sheep’s cheese called kashkaval. Jerusalem-style bagels ($2.49) are seeded and larger and softer than their American counterparts. And the puffy pita, familiar to anyone who’s visited Israel, comes with different toppings such as za’atar, onion or poppy seed ($2.99 to $3.49); the pita oven was custom-made in Israel. 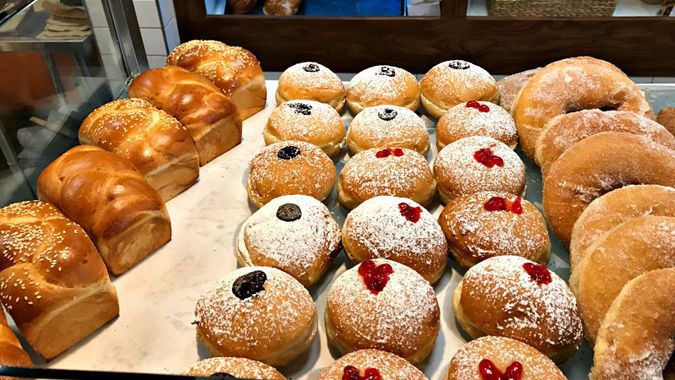 And those are just the savory items. A new pastry chef will come on board in the next few weeks to expand the sweet offerings, with imported chocolate and other staple items from Israel.

Inside the bakery, seats line the windows, with a few high tables nearby. Everything this reporter tried on her visit was delicious, from the kashkaval borekas with a side of z’hug, a vibrant green hot sauce for dipping Tel Aviv-style, to a hearty vegan squash soup of the day.

Yelpers seem to agree, with most reviewers (many of them Israeli, no doubt thrilled to have authentic food from home available here) giving the place five stars on everything from the food to the service.

Yosef opened the bakery in early December 2016 with an Israeli partner, Avi Edri. They met at a Hanukkah party a few years ago; Edri was working in the diamond industry, though he does have some baking experience, while Yosef worked in construction and retail. Setting a goal of serving the kosher community, they started with a pop-up in a San Mateo bakery, selling sufganiyot for Hanukkah in 2014.

“It was an experiment, and the demand was crazy, just from an announcement on Facebook,” said Yosef. “It’s kind of crazy that San Francisco is one of the top food cities in the world and it has almost nothing kosher to eat.”

After that initial experiment, they continued doing pop-ups, occasionally out of the kitchen at Congregation Chevra Thilim in the Richmond District.

Eventually, demand was high enough to consider a brick-and-mortar shop, and last month they finally opened their doors on Sixth Street.

The bakery was called Taboon for the first month — taboon is Arabic for the clay oven popular throughout the Middle East, similar to an Italian pizza oven, and it is the centerpiece of the bakery. But with hopes of one day expanding to more locations, Edri and Yosef wanted a name that no one is using yet (there is at least one other Taboon in the U.S.); they held a contest for a new name and chose Frena, which was announced on Jan. 23. 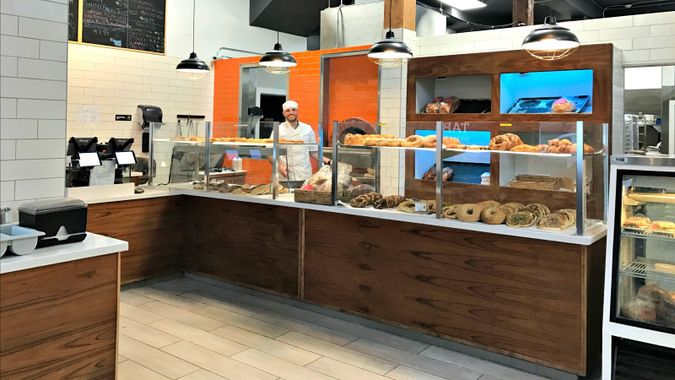 The inside of Frena Bakery

The name may have changed, but the clay oven that was the original namesake is still churning out products. “It bakes things at very high temperature with direct heat,” said Yosef. “It gives dough a smoky flavor, and a good crust.”

Overseeing the oven is Yanni, a childhood friend of Edri’s who preferred not to give his last name. He is a fourth-generation master baker who uses family recipes from his great-grandfather, who was from Iraq and owned a bakery in Jerusalem’s Mahane Yehuda market.

“These recipes are over 100 years old,” said Yosef.

Though this is Yosef’s first foray into the food industry, he grew up in a family where food played a major role, and over the years, he’s formulated a philosophy about it that is behind everything Frena does.

“The main thing about selling food is that you don’t need to convince the client that it’s good,” Yosef said. “If it’s good, the client will be convinced of that himself. You have to cook with love, and put everything you have into the food. Then, people feel it right away.”

The bakery is supervised by Sunrise Kosher–Vaad HaKashrus of Northern California, and the kosher community is en masse to support it, from tourists to families who come from around the Bay Area.

Rabbi Michael Rothbaum crossed the bridge from Oakland recently to try Frena. He was impressed by how authentic the bakery was, just like the bakeries where he’s eaten in Israel.

“Everything I tried was totally amazing,” said Rothbaum, who is co-chair of the regional council of Bend the Arc: A Jewish Partnership for Justice. “The pitas, the borekas and the za’atar all were completely authentic. It’s super tasty.”

Julie Levine, a San Francisco resident and J. columnist, said that while her home is “kosher-style,” she appreciates having a bakery in the city with such unique selections.

“It’s great to now have some parve savory bakery options,” she said, referring to food that is neither dairy nor meat, so can be served with both. “On weeknights, I keep things pretty simple with a one-pot stew or some kind of chicken soup, and want something to go with it that offers a little more substance than your typical loaf of bakery bread.” 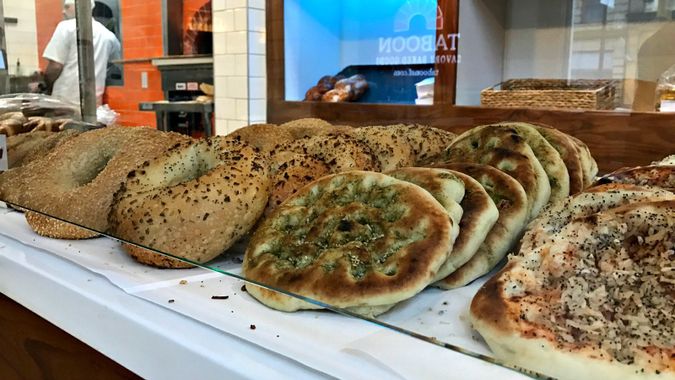 As for those sufganiyot, patrons don’t have to wait for Hanukkah to try them. They are available every single day. And for the locals wandering in off the street who don’t know from kosher, a $2.50 filled doughnut dusted in powdered sugar can be mighty appealing.

According to Yosef, locating the bakery on still-gritty Sixth Street was a practical decision. He and his team couldn’t afford the higher rent in more established areas, so they took advantage of city grants offered to enterprises willing to take a chance on neighborhoods in transition.

“We’re a new business with a low budget, and we did everything with our own hands,” he said.

He is confident that Sixth Street is on the rise, and hopeful that with all the nearby tech companies, it will continue to attract new businesses in the next few years. San Francisco Chabad Rabbi Yosef Langer shares his optimism — the rabbi recently opened a Chabad center across the street from the bakery, called Chabad SoMa Shul: Positively 6th Street, aimed primarily at young Jews working and living in the neighborhood.

The two, Yosef said, have a mutually beneficial relationship.

“[Chabad] saw that we’re here for the community, and not here just to make money,” he said. “We’ve done food for some of their events, and they send a lot of people to us.”

“Like every other starving kosher Jew in San Francisco, to have a bakery across the street from your place of worship and your place of doing business and your office is a huge, huge thing,” Langer said, adding that despite the fact he is on a no-carb diet, he has cheated a few times to have a sambusak.

Langer has been dreaming of such a collaboration for some time, believing that a kosher eatery is the cornerstone of any Jewish community. He hopes the Sixth Street area will become a new Jewish nexus of the city — he and Yosef envision other kosher enterprises opening nearby as well. While it’s too early to confirm details, they spoke of a kosher falafel and shwarma place rumored to be opening in the area; of course, the new bakery would supply it with bread.

Krantz, the Berkeley resident who came into the city shortly after Frena’s opening, is eager to return. “We’re trying to figure out when we can get back there because it was so good,” she said. “There are not a lot of kosher options around us. It’s really exciting.”

Alix Wall is a personal chef in the East Bay and beyond. Her website is theorganicepicure. This article first appeared on J. Weekly.