Whisky: Biting The Bulleit And Doing The ‘Dew’ For Purim 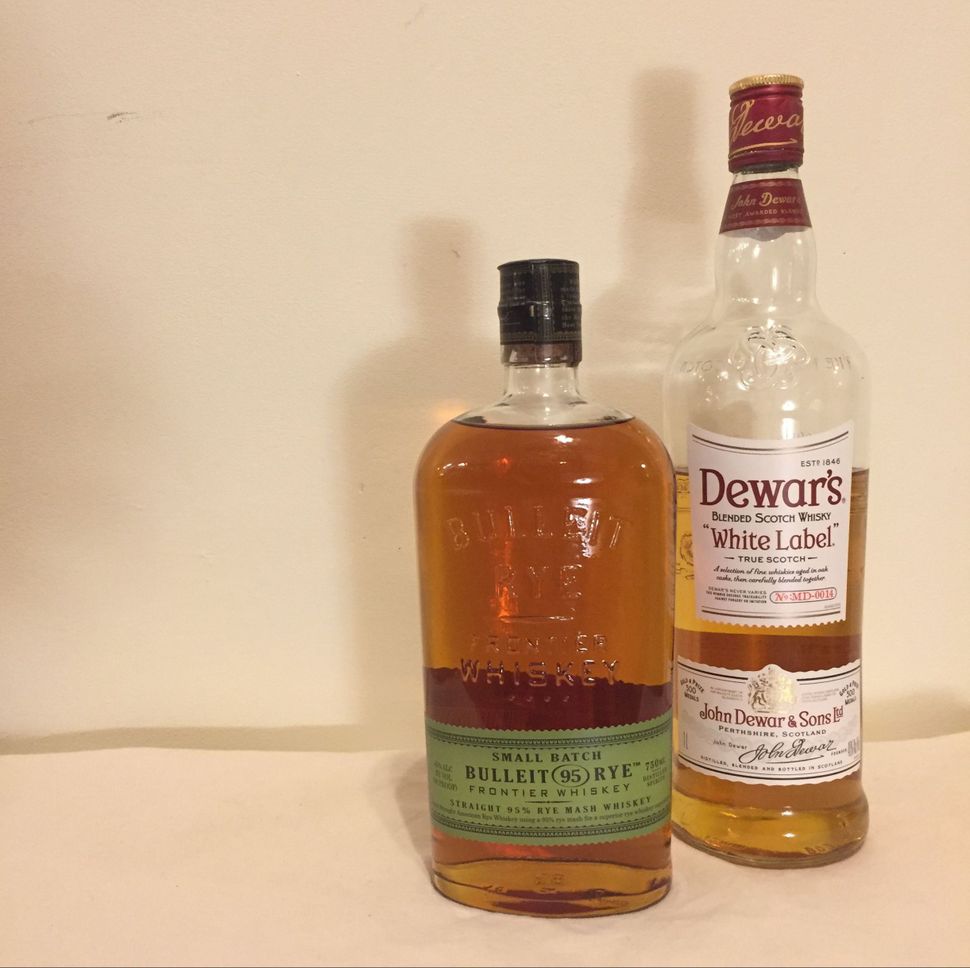 I thought I’d pop a couple of whisky-drinking cherries in time to review the two labels for Purim. Until this year, somehow I’d never tried Dewar’s White Label nor any of the offerings from the Bulleit company. And now, for you — Dear Reader — I have.

In some ways the two companies are the inverse of each other — Dewar’s was the biggest selling whisky in America in the early twentieth century while Bulleit was shuttered from 1860 – 1987. But, in other ways, they are parallel, their whisky-Toms are both believers in advertising.

Thomas Dewar — a charismatic globe-trotter — brought his father’s whisky from Perth to the world at the turn of the twentieth century. He is reputed to have said, “It’s not what we sell, it’s where we sell.”

This original “Whisky-Tom” has been emulated in some way by Thomas E. Bulleit, Jr, who decided to “revive” the brand lost when his great great grandfather Augustus Bulleit disappeared in 1860. Although not enjoying the volume of some of the major names, the Bulleit brand has joined them in windows and on shelves.

Dewar set the tartan trend in motion, playing up the small-town Scottish roots even as he moved to London, became a Baron and, seemingly agitated against Jewish immigration by sponsoring the 1905 Aliens Act. Nowadays, though, Dewar’s is owned by the Bacardi conglomerate.

Bulleit rode the indie Bourbon wave that saw huge increases in the quantity, quality and profitability of domestic production of bourbon and whiskey. Part of the return to Kentucky as the mythical heart of American distilling (even as Indiana produces most of America’s spirit), Bulleit is now owned by the Diageo conglomerate.

But what of the products?

Millions of purchasers can’t be wrong. The mouth start is pleasant. It’s sweet but not too sweet, there’s a promise of flavor and a satisfying warmish aftertaste. It has a proper whisky feel, probably from the Aberfeldy that is at the heart of the blend. But, strangely, there’s little or nothing following up the first taste. The profile of the flavor has a strange drop off between about second two and second ten. That makes it, for me, an ideal whisky for adding ginger ale, for example, but not for sipping.

The Bulleit Bourbon is rye enough, I’m told, and rye is what all the cool kids are drinking, I’m told. So I went to the motherlode, the Bulleit Rye whiskey. This had a lovely grassy flavor with hints of anise. It’s sweet, as befits its roots in corn country but, for a “Frontier” whiskey, I was surprised at the prominence of its herbal notes! Definitely worth sipping for Purim and don’t stop til Pesach.

Dan Friedman is executive editor and whisky correspondent at The Forward. Contact him at friedman@forward.com.

Whisky: Biting The Bulleit And Doing The ‘Dew’ For Purim