Your Guide To Gluten-Free Matzo 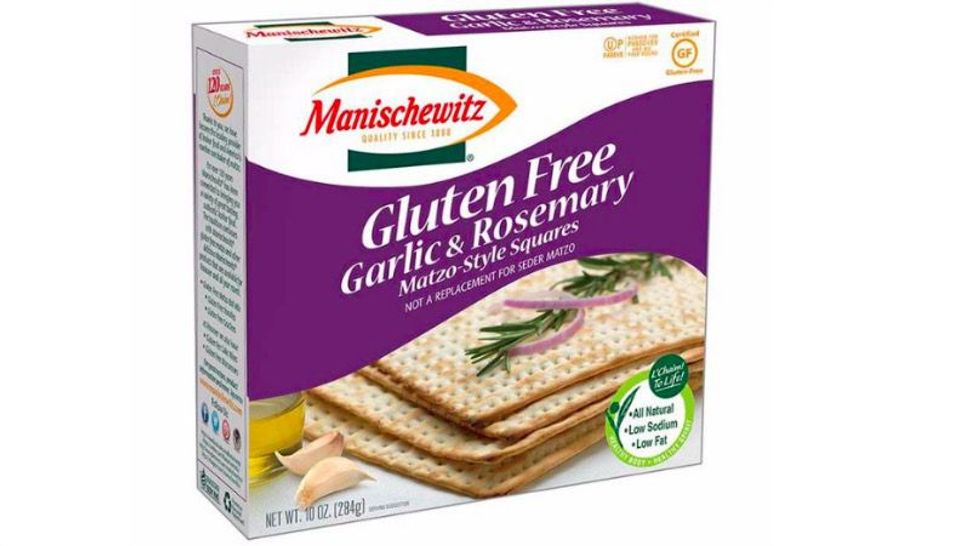 But for Jews with celiac disease, an autoimmune disorder that can damage one’s intestinal lining, or gluten intolerance, which involves icky reactions to that pesky protein found in wheat, finding the right matzah — which, in its normal form, is made from wheat — is not an easy task.

Thankfully, as the gluten-free diet has rocketed into mainstream food culture, there are now options for every kind of gluten-free matzah eater. Most of the world’s largest matzah producers — such as Manischewitz and Streit’s in the U.S., and Yehuda Matzos based in Israel — offer at least some kind of gluten-free Passover product.

Here’s a rundown of what every gluten-free Jew should know heading into Passover.

What are my options?

Thanks to the fact that up to a quarter of American consumers want gluten-free food, the market for gluten-free matzah increases every year, and there are more options than ever. Most are made chiefly from a combination of tapioca and potato starches.

Manischewitz, one of the country’s biggest matzah makers, first started baking its gluten-free matzah in 2013. The company wouldn’t disclose its official production numbers, but it now offers around 75 gluten-free products, from matzah ball soup mix to egg noodles to chocolate chip cookies (and of course gluten-free matzah in multiple flavors, including garlic and rosemary).

The other mammoth gluten-free matzah provider is Yehuda. Gefen makes its own version as well, although it markets it as “matzo crackers.” Streit’s, the family-run business which moved its iconic factory out of New York City in 2015, makes a gluten-free matzah ball mix.

In addition, a few bakeries produce another category of gluten-free matzah — the kind made out of oat flour.

Can I use gluten-free matzah during the seder?

Matzah is not just the most recognizable Passover food in popular culture. Observant Jews are required to eat it during the seder — but only if it’s made from one of five varieties of grains that have the potential to leaven, or turn into bread: wheat, rye, barley, spelt or oats.

Out of those choices, oats are the only completely gluten-free option.

So while the tapioca and potato versions look just like normal matzah, they cannot be used as a true substitute in a religious seder.

Daniel Gordon, a rabbi in the Kfar Chabad village in central Israel, helps distribute oat matzah made by the Tiv Hashibolet bakery in Jerusalem. He said there was an “unbelievable lack of knowledge” about the religious requirements for matzah among non-religious Jews.

“[People] were mistakenly using a cracker given the name matzah,” Gordon said. “They didn’t really understand that they’re not fulfilling the mitzvah” of eating approved matzah.

How much is it?

A typical 10-ounce box of matzah costs around four to five dollars. Most iterations of tapioca and potato gluten-free matzah cost roughly the same, maybe a dollar or two more in some places.

But oat matzah is a whole different ballgame. A box of oat matzah from the Lakewood Matzoh bakery in Lakewood, New Jersey — which ships its product to customers all over the world — usually costs more than $25 (including shipping). A 16-ounce box of Kestenbaum’s brand oat matzah sells for over $30 with shipping.

Tiv Hashibolet used to distribute 500 boxes of oat matzah to Israeli citizens for free with the help of a donor — now it has been forced to sell it for 85 shekels, more than $23, per box.

What?! Why is oat matzah so expensive?

As explained by Israel Davidowitz, a manager at Lakewood, oat matzah is “nearly impossible to make.”

Ephraim Kestenbaum, a London-based rabbi and chemist, first developed an oat matzah in the 1980s, inspired by his daughter who was diagnosed with celiac disease. He found a farm north of Edinburgh, Scotland, that produced oats he could completely separate from adjacent wheat crops, and baked his first batches himself.

After a few years of perfecting the process and watching the demand for his product grow, Kestenbaum moved the operation to Israel, where it was produced until recently in the village of Atarot.

But getting oat flour to stick together — something it took Kestenbaum years to perfect — is arduous, since it’s gluten that acts as a binding agent in normal matzah and bread. Davidowitz estimates that about half of the harvested oat flour gets lost in the baking process.

Lakewood sources it oats from Montana and Wyoming, and it needs to send mashichim, or kosher certifying supervisors, to monitor the oats from the time they are planted to the time they are harvested. The fields also need to be watched carefully and tested so that traces of wheat don’t seep into the oats area.

Workers at Tiv Hashibolet spend about nine hours cleaning the facility — down to the floors and up to the light bulbs in the ceiling — to make sure no traces of gluten linger in the air before baking its oat matzah. (It now makes a product with only about 5 parts of gluten per million, while the American gluten-free standard is 20 parts per million.)

While oat matzah is the successful result of years of difficult experimentation and a godsend for observant gluten-free Jews, its taste is — interesting.

Normally, in order to counter the bitterness of certain enzymes, oats are injected with steam just before they are milled and made into gluten-free products. But this steaming technically makes them hametz, or leavened — and therefore not kosher for Passover.

So, the world’s few oat matzah bakeries skip the steaming step, leaving the end product with a bitter aftertaste.

As for tapioca and potato starch matzah, veterans of the gluten-free diet will be used to the taste — light, grainy and not quite as scrumptious as its wheat-based counterpart.

Fortunately, gluten-free matzah work just as well as the normal kind as the base for all kinds of toppings. And while matzah is required for the seder, there’s an entire world of gluten-free food to be eaten during the Passover week, from chicken to vegetables to chocolate.

So fear not, gluten-free Jews — Passover can be your friend.

Your Guide To Gluten-Free Matzo