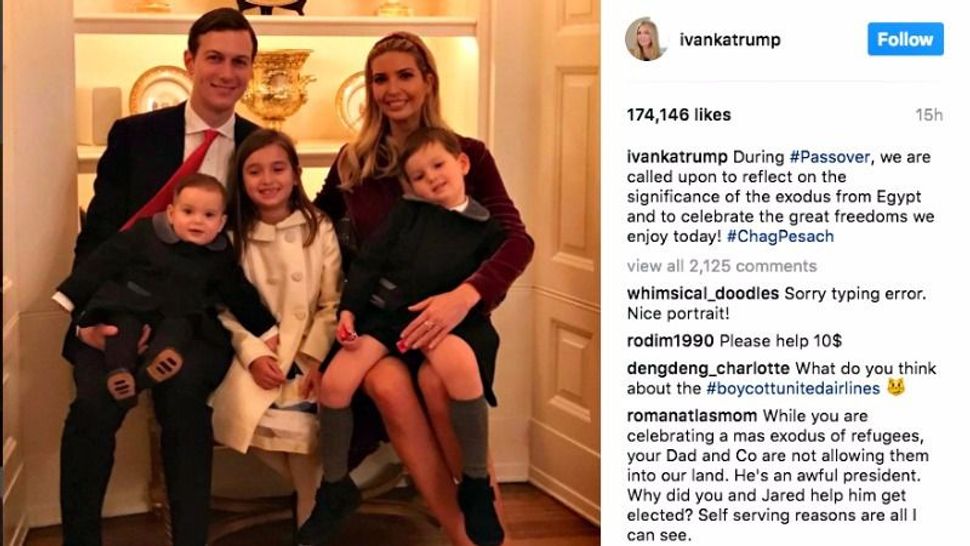 Ivanka Trump posted this image and message on her Instagram and Twitter feeds Monday night. Image by Instagram/Ivanka Trump

Having posted Sunday that President Donald Trump would be hosting a Seder at the White House Monday evening for the first night of Passover, I was somehow not surprised to read that he was, in fact, a no-show.

First daughter Ivanka Trump and her husband, Jared Kushner, who are Jewish, were not in attendance either. At about 8:45 last night, Ivanka Trump posted the family photo above on Instagram and Twitter, with the comment, “During #Passover, we are called upon to reflect on the significance of the exodus from Egypt and to celebrate the great freedoms we enjoy today! #ChagPesach”

In a pointed response, someone posted the comment: “While you are celebrating a mas [sic] exodus of refugees, your Dad and Co are not allowing them into our land…”

Along with White House staffers, one Trump cabinet member participated: secretary of Veterans Affairs David Shulkin, who is a holdover from the Obama administration.

White House Deputy Press Secretary Sarah Huckabee Sanders told The Times of Israel that a kosher meal was provided at the Seder, which was held in the Indian Treaty Room of the Eisenhower Executive Office Building, not far from the West Wing.