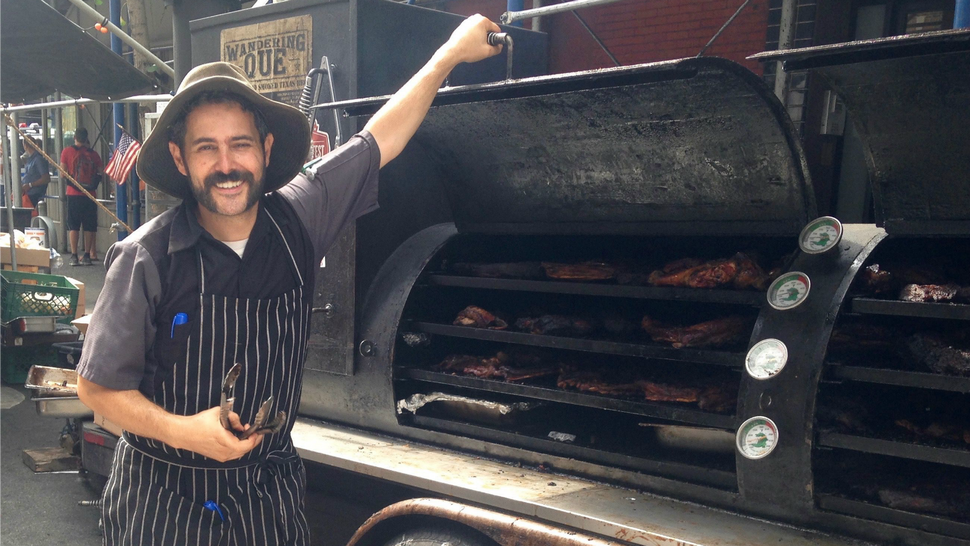 Last year’s Brisket King, Ari White, poses in front of his smoker at a street fair in Manhattan.

Tonight, a new Brisket King will be crowned.

The 6th-annual Brisket King of NYC event will be held from 6–9:30 p.m. at the Food Sciences Academy of Long Island University Brooklyn in Downtown Brooklyn, and tickets are still available.

Last year, the Wandering Que’s Ari White won the top prize with a kosher lamb brisket. Izzy’s Barbecue Addiction, which is competing again this year, was a runner-up.

This year’s winner will not only receive the coveted crown, but also a biblically (and post-Passover approved) golden calf trophy. Jake Dell of Katz’s Deli will be on the judges panel, joined by John Tesar, who, as a Top Chef contestant was the sworn enemy of Katsuji Tanabe, the chef behind Mexikosher. Other judges include Daniel Vaughn, who has the enviable position of being barbecue editor at Texas Monthly, and Aaron Franklin, one of the hottest pitmasters on the barbecue scene.

There are still tickets available, so if unlimited brisket samples, craft beer and artisan cocktails sound good, it might be time to make a last-minute plan.