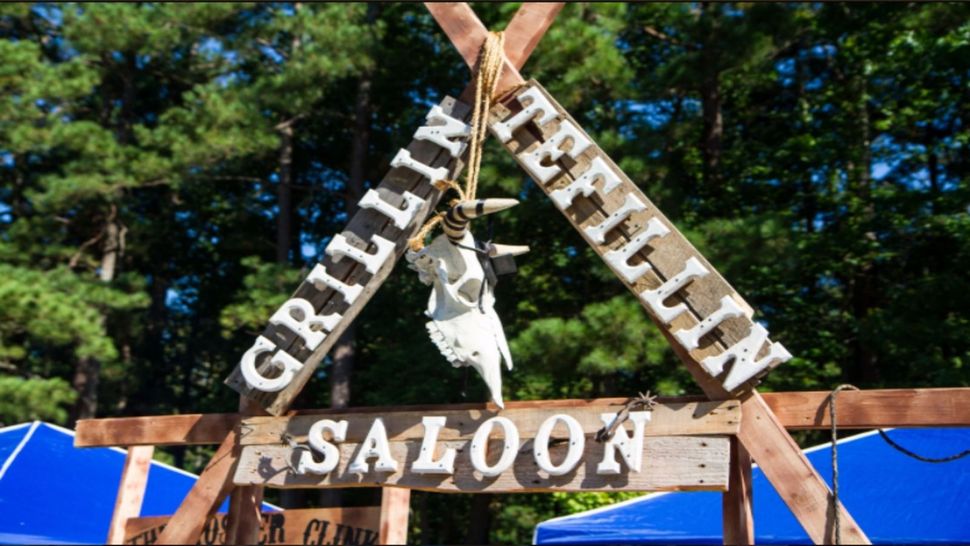 The unmistakable smoky scent melted into the air — the kind of smell that sticks to your hair and clothes and refuses to leave.

More specifically, that’s barbecue at the Atlanta Kosher BBQ Festival, an event I attended in 2016 and in which my father, Eric Solomon, competed.

May is National Barbecue Month and now more than ever, kosher-keeping Jews in the South have the opportunity to celebrate with the smoked meat so prized in the region in which “you” is pronounced “y’all.” These days, an increasing number of kosher barbecue festivals and sellers are stepping up to the smoker. 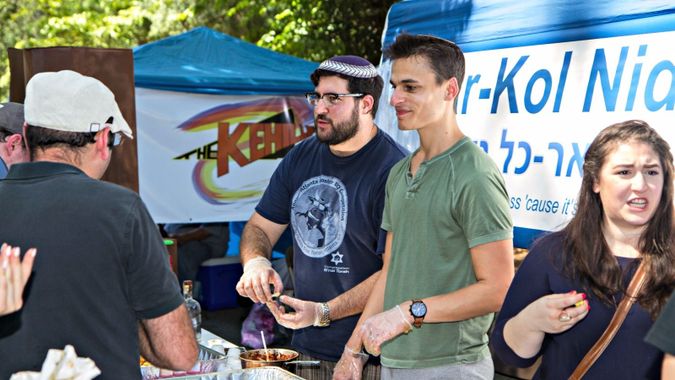 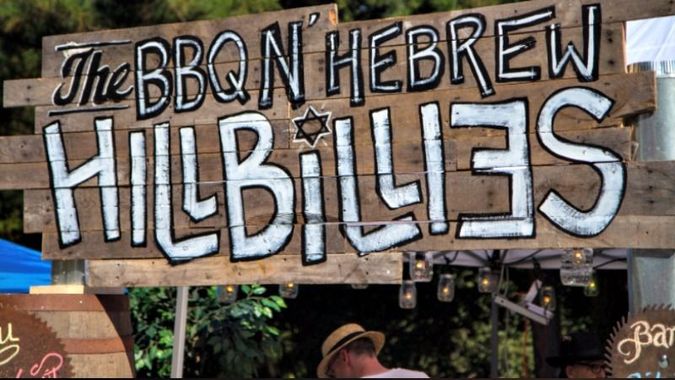 Hebrew Hillbillies: A team at the Atlanta competition. Image by Courtesy of The Kosher BBQ Festival/Dr. David Adler and Eric Bern

The oldest kosher barbecue competition in the South is in Memphis, and it started because of bingo. Anshei Sphard Beth El Emeth Congregation used to hold a bingo fundraiser, but a Tennessee law against gambling made that event illegal. So in 1988 the synagogue moved to plan B: barbecue. And so the World Kosher Barbecue Championship was born. Like the Atlanta competition, the event takes place on October 22 this year.

“Historically, probably 15 or 20 years ago, for Jews who kept kosher the idea of barbecue was never in their mindset. It was never anything they thought about, because it was never really available,” said Eric Mogy, co-chair of the World Kosher Barbecue Championship. “Barbecue in the South is pork, and pork is not kosher, so it was not anything that anyone comprehended.”

But as fewer Jews keep kosher, he said, more have tried barbecue. This apparently was a spark, prompting Jews in the South to adapt this piece of culinary culture to work within their own.

“They’re trying to think of different ways that they can start incorporating that into the Jewish world,” Mogy said. “I think that’s why it’s blowing up. It’s just time, modernity and more willingness and acceptance to try new and different things in the Jewish world.”

Another competition, the Charlotte Kosher BBQ Championship, started a year after Atlanta’s. The Levine Jewish Community Center puts on the event every Labor Day. It features a pickle-eating contest and mechanical bull riding. This year, it falls on September 4.

“We started the program because we really wanted the community to have a festival like this where everyone was welcome,” said Peter Blair, CEO of the Levine JCC. “The kosher dining options in Charlotte are minimal, so this was a way to do a festival at the community center, meet the highest levels of kashrut and have everyone be able to participate.”

About 1,000 people attend each of the competitions in Charlotte and Memphis. Atlanta saw 3,500 people in 2016. Event organizers said attendance is mostly Jewish, but they see many non-Jews too.

People at first seem confused when Mogy explained that kosher barbecue has no pork, he said.

“The most common reaction is: ‘It has to have pork if it’s going to be barbecue,’ ” he said. “Once I explain it to them, that it’s beef brisket, that it’s beef ribs, that it’s chicken, they feel a lot more comfortable because they understand that too.”

Kosher barbecue competitions are open to anyone who wants to register as a team. Last year, my dad cooked in Atlanta’s festival as part of a group that calls itself the Brisketeers. The team, in homage to “The Three Musketeers,” shouted “All for brisket and brisket for all” in unison to people who visited its tent:

In addition to synagogues and Jewish organizations, the local police and fire departments have teams as well.

Captain Tom Burrell of Dekalb County Fire Rescue said that a few nights before the competition, all the teams did a few hours of supervised food prep at a synagogue. As part of the entry fee, the Atlanta Kosher BBQ Festival provides all food, equipment and grills, to ensure the barbecue is kosher. 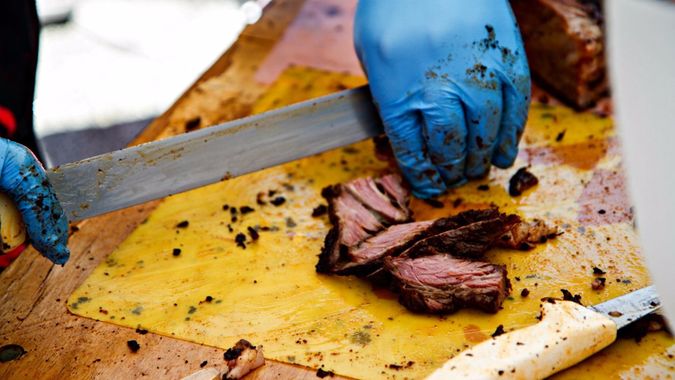 Beautiful Brisket: To ensure kosher standards, the meat is provided by the Jewish organizations that host the events. Image by Courtesy of the Atlanta Kosher BBQ Festival/ Dr. David Adler and Eric Bern

“In the South, we’re mostly familiar with smoking pork, and that’s not involved. The preparation, having everything overseen by a rabbi — this wasn’t something where you showed up before the event and you just got to cooking,” Burrell said.

My dad is the first to tell you that he’s not a chef.

“I was surprised that I was asked by the group [to join] because I’m not a cook — and why would they want me to join the group if cooking is what it’s all about?” he said. 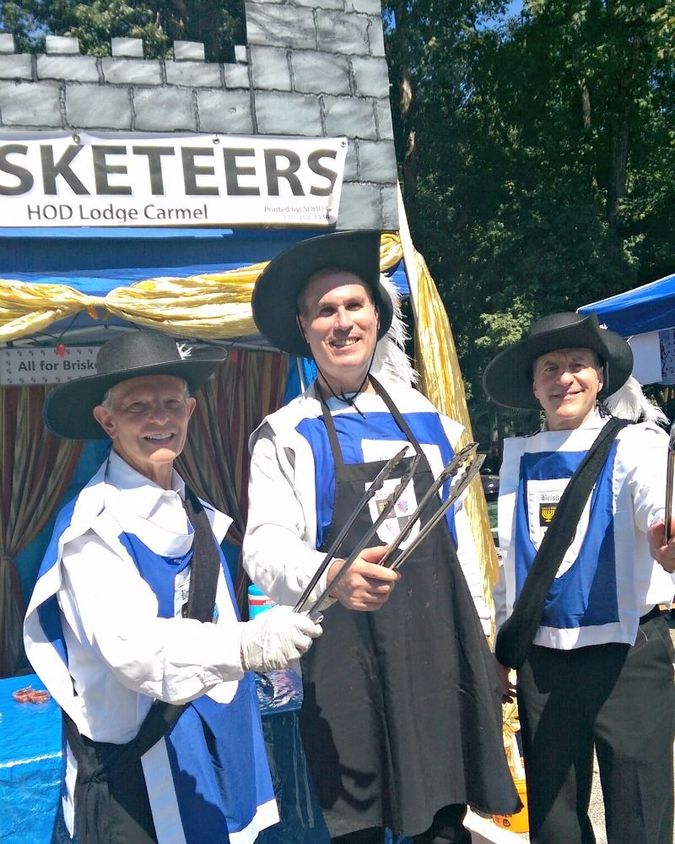 The Three Brisketeers: Last year’s winners serve their meat with a cry of ‘All for brisket and brisket for all!’ Image by Stan Sloan

Turns out the group wanted my dad to “babysit the brisket,” as he explained. The night before the competition, one or two members of each team stay up to monitor the briskets in their Weber Kettle smokers in Brook Run Park. My dad added briquettes and adjusted the temperature as needed. It must have worked, because the Brisketeers won first prize in the brisket competition.

“That’s when actually a lot of fun takes place with the teams,” Sergeant Trey Nelson of the Dunwoody Police Department said about the overnight cookout. “There’s nothing but smoke in the air at this park, and they kind of lock us all in the park and there’s all these teams, just a stretch row of all these grills and all these tents.”

In addition to bringing diverse communities together, kosher barbecue has also spawned businesses. Keith Marks helped begin the Atlanta Kosher BBQ Festival, and sells kosher barbecue at the event through his outfit, Keith’s Corner BBQ. The business opened in 2015, but it didn’t become kosher full-time until February.

“It certainly made me realize that people love my creations with barbecue, and they wanted to be able to have more access to it, and because I wasn’t kosher I wasn’t able to fulfill their needs,” he said.

Now, he does kosher catering and pop-up events where people can either pre-order or buy his meat on the spot.

In Texas, where beef barbecue reigns, JoeBob’s Barbecue in Austin has done kosher barbecue catering since 2015. Joel Davis, the owner and pit boss, called it a one-man show.

“It’s always been a dream of mine,” he said. “It was a really great way to tie my two heritages together, as a Texan and a Jew.” 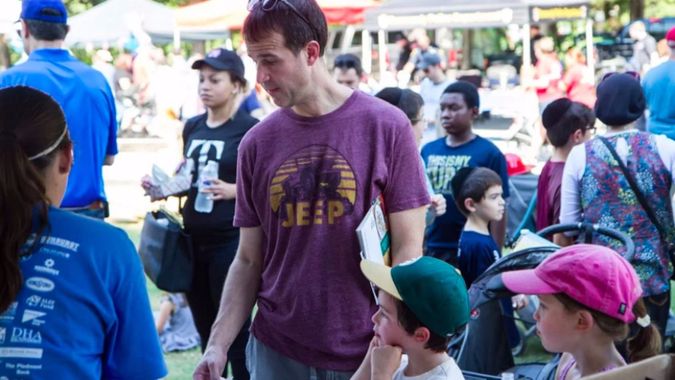 Davis said he felt compelled to finally start his business after the death of his dad, which also inspired Davis to give JoeBob’s Barbecue a philanthropic aspect. About 10 percent of his sales go to charity. When customers buy food, they choose where part of the proceeds will go from a list of five charities, including the C Diff Foundation.

Davis said he has always loved barbecue. Growing up, when his family made pot roast, he would sneak off and douse it in barbecue sauce.

“I quickly learned at an early age that [pot roast] was brisket abuse, so I’ll have to apologize to the meemaws and nanas and bubbes out there, but there’s a better way to cook brisket,” he said. “Once you’ve eaten a brisket that’s been smoked right, you don’t go back.”

Davis serves his barbecue throughout Texas, and in the next year he wants to begin mailing his food to the rest of the U.S.

Pollack, of the Atlanta Kosher BBQ Festival, said the rise in kosher barbecue is part of a normal progression. For years, synagogues have had Lag B’Omer barbecues with burgers and hot dogs, so grilling has long been a part of the Jewish identity. Now more and more, barbecue is becoming part of Jews’ Southern identity.

“We as Jews have always been a people who have kind of been excluded, and so the idea of doing Jewish barbecue is just our way of trying to keep ourselves separate but at the same time [integrating] ourselves into the area that we’re born and raised. Yes, we’re Jews, but we’re also Southerners. We love our SEC football. We love our barbecue,” Mogy of the Memphis competition said. “This is just another way that people recognize who we are as Jews, but at the same time who we are as Southerners.”

“There’s something really unique about being a Jew in the South,” said Blair, of the Charlotte Kosher BBQ Championship, who is a native of Memphis. He said he hopes to see a national kosher barbecue competition soon, where the winners of all the city competitions compete. He offered Charlotte up as a host city.

“You have your cultural identity that is clearly the Jewish part of who we are, but you’re immersed in Southern culture and a huge part of Southern culture is barbecue. Not just barbecue meaning ‘I’m going to take a piece of meat and grill it,’ but I’m going to gather with friends. I’m going to dress the table. I’m going to have the tea lights out and we’re going to sit around in the summer and roast an ear of corn and share a cocktail and tell stories and do it over food,” he said.

“Jews have gathered and built culture around food for all these millennia, and now we are incorporating in that a unique part of Southern life, which is barbecue, and doing it in the way that we do as Jews, which is practice our dietary laws and do it in a cuisine that we love and that our culture loves.”

Adina Solomon is a freelance journalist based in Atlanta. Her work has appeared in the Washington Post and U.S. News & World Report. Follow her on Twitter, @adinars