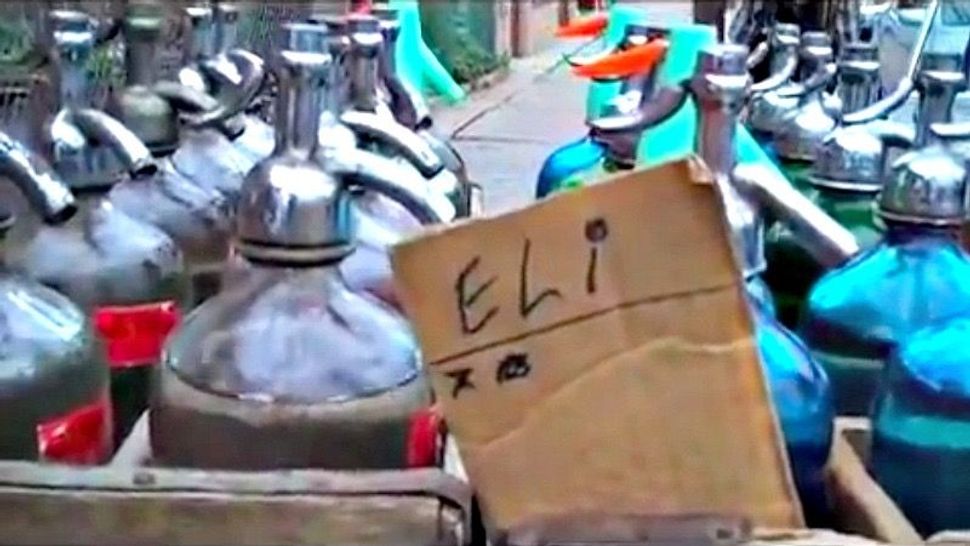 If you live in Brooklyn long enough, you will invariably cross paths with one of the very few remaining seltzer delivery men left in New York. You might see an older gentlemen shuffling up a brownstone’s steps carrying a wooden crate filled with jostling glass seltzer siphons in clear and blue hues with silver-colored nozzles on top or an old truck with open sides brimming with bottles and a sign that says “home deliveries.”

In 1960, when Eli Miller started delivering seltzer, there were hundreds of seltzer delivery men working in the city. As of this summer, there is one less. At 84, Miller, who was the oldest of the crew, retired. Or, as he put it in an article that broke the news in the New York Times, “Old seltzer men never die…They just lose their spritzer.”

He kept going so long because, “My customers are my family,” he explained. And, “No way I’m going to let my family drink that dreck,” he said, referring to store-bought seltzer, which is typically less carbonated than delivered seltzer.

It wasn’t just Miller who thought of stops on his route as visits to family members. “It really did feel like a visit from an uncle,” explained Lisbeth Kaiser, who, as she put it, was “fairly new to Eli’s route,” having received deliveries from him for two and a half years, since she moved with her family to Ditmas Park.

Miller offered a connection to a past generation. “Being a customer of Eli’s was always just partially for the seltzer,” she said. “It was a chance to take part in a kind of personal transaction that doesn’t exist anymore.”

Deliveries were often followed by a visit, where Miller would sit with Kaiser and her 3-year-old daughter on their porch to talk about the old neighborhood. “He always told the same jokes, and they were pretty old-fashioned jokes, but they never lost their kick. It was almost like part of the package: You get the old-school seltzer and the old-school seltzer man,” she said.

Her sister Cecily Kaiser, who along with her family lives with Lisbeth, remembers those jokes had a particular theme to them: “Eli never failed to deliver at least one inappropriate joke with each crate of seltzer…and he did not discriminate: he’d tell a sexist joke to a woman, a Jewish joke to a Jew, it didn’t matter. The joy he got out of sharing such humor made the content somehow less offensive.”

Miller’s visits weren’t limited to jokes and neighborhood recollections. Emily Barton Hopkins, who used to meet Miller on her stoop to collect her crate of seltzer and schlep it to a 5th floor walk-up when Miller was no longer able to, would talk politics with Miller on the stoop. “Eli was the first person, of anyone I knew, to come out in favor of Barack Obama’s bid for the 2008 Democratic nomination,” she explained. “I was really excited about this passionate, erudite candidate, and so excited that Eli was reading reports of all the same speeches and coming away with the same sense.”

These days, she lives outside of a seltzer delivery range, having moved to Kingston, a town in the Hudson Valley. “We bought a Soda Stream. It’s an inexpensive way to make perfectly acceptable seltzer, but oh my goodness, I miss those old glass bottles with their dinged pewter siphons.”

The 80 or so customers remaining on Miller’s route won’t go without seltzer. Miller has seen to it. He’s passed along his route to Alex Gomberg, the city’s youngest seltzer delivery man, whose family owns a seltzer distribution business, and who launched The Brooklyn Seltzer Boys, a new generation seltzer delivery company, a few years ago.

Lisbeth Kaiser received the news recently when she called to place an order. “I called Eli in May to arrange an extra delivery for my new daughter’s baby naming party and he gave me the sad news that he had retired the route… he made sure to tell me that Alex was a real standup young man,” she said. “It was so important to him to make sure we felt taken care of, like the torch had been properly passed. it seems like it has.”