Tina Fey Says ‘Eat Cake’; Here Are Jewish Bakeries To Buy It From 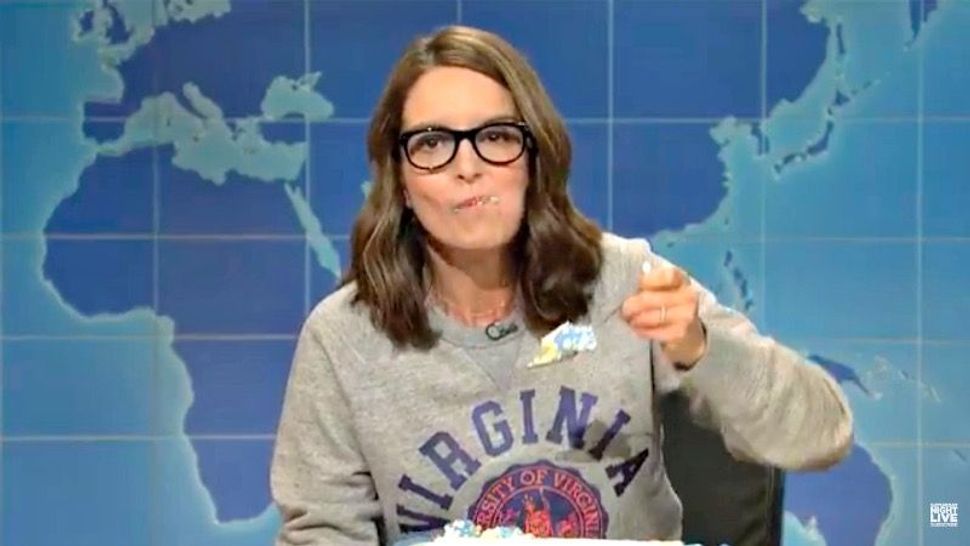 Tina Fey eats her feelings in the name of justice. Image by snl/youtube

When Tina Fey appeared on SNL’s Weekend Update to weigh in on the violence in Charlottesville, she shared her personal coping method, which she calls “sheet caking.”

Instead of protesting neo-Nazis in person, thereby giving them attention and increasing the risk of getting hurt, Fey suggested something far more superficial, at least on the surface. In effect, she said, “Let them eat cake,” and demonstrated by scarfing one that was decorated with an American flag. Said cake, she said, should be purchased at a Jewish or black-owned bakery, a way to express true solidarity with the people the neo-Nazis are marching against.

The bit, which included many food-related jokes, like hoping Neo-Nazis do try to rally in New York City, to get the “ham-salad kicked out of them by a bunch of drag queens,” elicited both praise and criticism on social media and news sites.

Some felt that Fey was engaging in “white feminism,” which is a form of feminism what focuses solely on the struggles of white women, while ignoring the oppression faced by POC, which is its own form of oppression against the minorities she purports to want to help. Others felt that she meant well, but that encouraging people to sit at home and eat their feelings was the same as encouraging them to tacitly support evil. Still others felt that Fey wasn’t encouraging anyone to eat cake instead of protest — that she was actually making fun of people who “virtue signal” — doing things like eating cake purchased at a black-owned bakery to show their virtue while in fact doing nothing about the problem at hand.

In the skit, Fey says that “sheet-caking is a grassroots movement.” If sheet-caking becomes a thing, and does indeed encourage people to support Jewish-owned bakeries, we have some suggestions for where to find that cake.

Here are a few of the best Jewish-owned bakeries nationwide:

William Greenberg
Location: Manhattan
William Greenberg has been around since 1946 and is the home of “legendary” black & white cookies. This place is a Jewish pastry paradise, with everything from rugelach to babka to yes, sheet cake.

Keter Bakery Cafe
Location: Boca Raton, Florida
This bakery is for the European pastry lover, filled with richly decadent eclairs and buttery croissants. And you can custom-order an intricate, richly crafted cakes that is so gorgeous, you won’t even want to eat it.

Cake Monkey Bakery
Location: Los Angeles
Owned by Jewish-Mexican pastry chef Elizabeth Belkind, this bakery is a cake-lovers paradise. Since it began as a result of the founders’ love of all kinds of cake, this place has every iteration of cake imaginable. The cakes are both “playful” and “sophisticated,” all the better to smash your miserable face to carbo-load your Neo-Nazi woes.

Levinson’s
Location: Chicago
One of the original Jewish bakeries in Chi-town, this historical pastry spot is a mecca for old-school Ashkenazic sweets, like coffee cakes and honey cakes.

North Shore Kosher Bakery
Location: Chicago
Love Israel? Then you’ll love the Israeli-style goodies handcrafted by husband and wife team Michael and Tehiya Benezra. Get some of their famous Israeli rugelach to eat with your order of “specialty decorated cakes.”

Butterflake Bakery
Location: Teaneck, New Jersey
Not only does Butterflake stake claim to being “the best kosher bakery in the United States,” it’s also fully nut-free. And the cake selection is nothing short of dizzying, ranging from character-molded cakes to cheese cakes.

Canter’s Deli (Bakery)
Location: Los Angeles
Canter’s may be an historic deli with an award-winning pastrami, but its bakery is stocked with all the classics, including a seven-layer cake.

Tina Fey Says ‘Eat Cake’; Here Are Jewish Bakeries To Buy It From