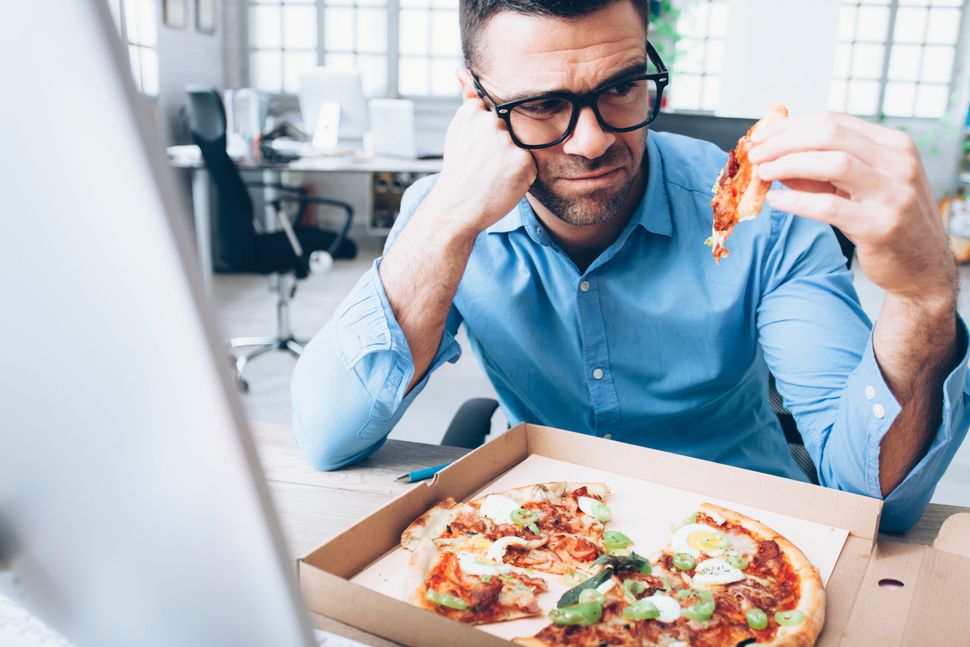 When all you want is some pizza, but you have to fast, you gaze longingly at the slice you can’t have. Image by portishead1/istockphoto

Yom Kippur is the holiest day of the year. It’s the day when we become like angels: We pray all day and night and we don’t eat as we beg God for forgiveness; for Him to grant us a good year. But that doesn’t mean we always succeed. At least we don’t always succeed at keeping our thoughts in line with our prayers and the synagogue service. In other words, it’s not unheard of to let our minds drift to the foods we’re becoming more and more desperate to eat at that moment.

Fasting is, after all, hard. Even though the decree to fast is meant to keep our focus on the holiness of the day, only a disciplined few are able to make it out of Yom Kippur without having a single thought about food. Most people, as the morning service drags on, begin to feel progressively weaker. By Une’tanneh Tokef, their stomachs begin to growl loudly in protest, and they clutch at their bellies, hoping no one has heard. By Ne’eilah, images of food stream through their consciousness like a runaway train, and all attempts to concentrate on the task at hand (like prayer) prove fruitless in the face of the onslaught of evocatively tempting thoughts: gooey cheese oozing off a slice of pizza; the creamy richness of a bar of chocolate; the juicy flavor bomb of a perfectly cooked burger.

I was going to get all pious and claim that I’m above material notions like cravings on Yom Kippur. But I knew I wasn’t going to fool anyone with that lot of tripe. So, just so you all know, my go-to craving tends to be a bar of Hershey’s milk chocolate with almonds, especially when I’m standing for an interminable amount of time during services and my blood sugar is low.

But I wanted to know what other people crave on this Holy Day. So, I took an informal poll, asking my colleagues whose desks happen to be nearby. Here’s what they said:

Laura, Contributor Network Editor: It’s usually a Big Mac. But I need you to make it clear that I don’t eat treif [ed note: Laura is Orthodox]. It has all the umami, the meat, the fluffy bread. Now I’m craving it.

MH: But I thought you don’t eat meat.

Jenny, Pop Culture Writer: My Mom is a Rabbi, and she stepped off the bima for a moment during a neilah service, and I walked up to her and I whispered: Wouldn’t you really want a quesadilla right now? It was a really dark moment in our child-parent relationship. And since then, I would say that quesadillas are my go-to. Like a cheese quesadilla. That’s what I think about. Maybe also like a chocolate milkshake.

George, Social Media Intern: A can of diet coke and a xanax. Because I’m fasting. Maybe also a grilled cheese sandwich, just because I never eat them; there’s too much prep work. You have to fry the cheese and then you have to lie down after you eat it because it’s so much. I agree with Steven: It’s the self-hating component. You have to tantalize yourself with foods that you’ll never be able to eat. It’s a common theme.

What do you crave on Yom Kippur? Let us know in the comments!