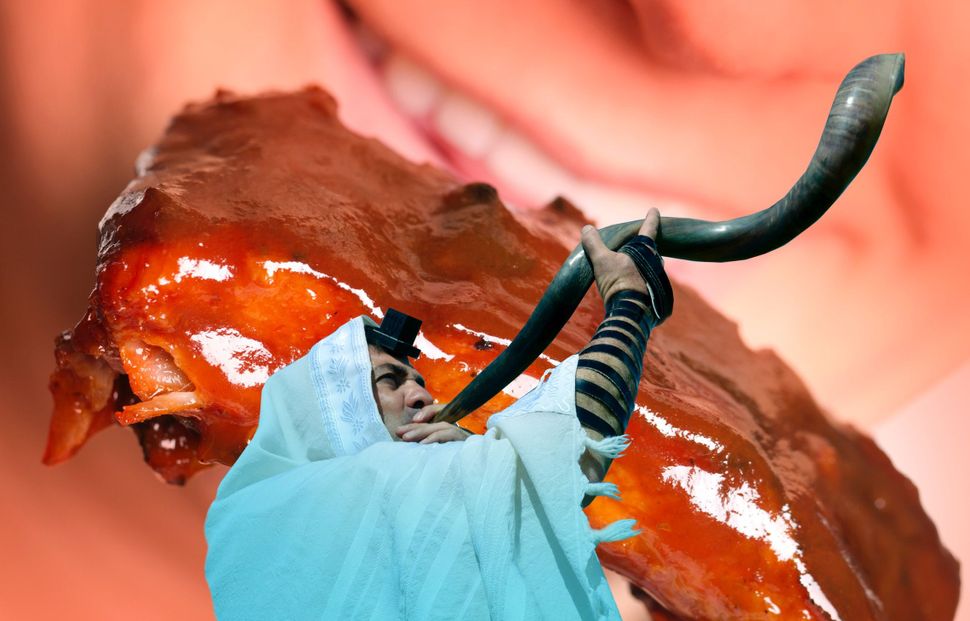 I grew up in a semi-religious household. My father was Orthodox; my mother was resentful. It wasn’t that she rejected Jewish beliefs, but she didn’t exactly respect them either. Nowhere was this more evident than in the small kitchen of our Lower East Side apartment. Keeping kosher was a constant source of conflict. Jewish food and related rituals were equally triggering.

There was the case of the misused meat knife. This, and other screwed up silverware arguments, often concluded with my mother in a rage, stabbing cutlery into soil. The failure-to-read-the-ingredients fights were also memorable. My father’s eagle eyes could spot the word “shortening” a mile away. If the word vegetable was not by its side, the unopened package was tossed. Once, upon discovering gelatin in the ingredient list of a blueberry pie, he confronted my mother, waving the box in her face. Pie in hand, my mother tossed the dessert into the air with such force that it rose higher and higher until it landed on the ceiling. The goopy, glue-like gelatinous filling helped the whole pie cling to the paint for at least a minute before it came crashing down, leaving a purple stain as an indelible reminder.

Of all my mother’s religious rebellions, I always thought her Yom Kippur betrayal was the worst. It was the first of many “don’t tell your father,” mother-daughter moments. I was seven years old. Our shul still allowed me to sit downstairs with my father but, if my mother attended services, my father made me sit upstairs with the women.

My mother was zaftig and, between fasting and schvitzing, it was difficult for her to focus on the service. While she shifted in her seat, I kept my eyes fixed on the men swaying below. Spotting my father in his favorite pew, I wished I was next to him, playing with the fringe of his tallis and pretending to understand his sing-song mumbling buzz.

When morning services ended, the congregation poured out of the Bialystoker Synagogue and gathered outside. I was reunited with my father and held his hand as my parents spoke to friends. When it was time to go back in, he passed me back to my mother. Instead of moving toward the staircase with the other women, she lingered outside. I thought she wanted more air, but when almost everyone was inside, she took me by the hand and headed away from the shul. At the corner, instead of turning toward the East River, where we lived, we went the other way.

“I had to get out of there,” she told me. “Are you hungry?” she asked. “Children don’t have to fast you know.” Before I could answer, she said, “I have an idea.” When I asked where we were going she just said, “You’ll see.” We held hands, swinging them and almost skipping past Essex and Orchard where the streets were empty and the stores were all closed for the holidays. In Chinatown, it was business as usual. Grand Street was lined with open crates of sweating fish, wilting vegetables and softening fruit. The smells were a strange blend of toxic and intoxicating.

“Air conditioning,” my mother said with relief, pulling me down some stairs and through the door of a restaurant with dead ducks hanging upside down in the window. On the way to our table, we passed fish tanks with giant goldfish and lobsters. The waiter came with a metal teapot and poured steaming liquid into tiny white cups. I added a stream of sugar and watched as the white granules turned brown, sinking to the bottom like sand in the ocean.

“Don’t tell your father,” my mother said as a plate of Flintstone size ribs arrived at our table. Bones stuck out like handles from the meaty, sticky bars. My mother plucked the biggest one from the pile and held it up to her lips like a smile. I chose a smaller one. It reminded me of a lamb chop, but I knew it wasn’t. It took two hands to hold and smelled so much better. My mother ate a few ribs but I decided to stop at one. We both licked the sweet glaze off our fingers, only using wet-naps to mask the smell. Two red and white striped mints sat on the check. My mother popped one into her mouth and handed me the other. “Freshens the breath,” she said. But I knew it was for covering up our lies.

Later that night, my father came home and broke his fast. Everything was fine until he asked why I wasn’t eating. I just shrugged my shoulders. But my mother, ignoring her own advice, started telling my father what we had done. I stopped breathing and my whole body froze except for my eyes. They teared up and stared at my mother in disbelief. Why? “Damn it Ellen,” my father said, raising his voice at my mother who flinched ever so slightly. His face turned red as he slammed his fists on the table, and again on the door frame, before storming down the hall and into their room. I wanted to go after him but my mother needed me too. Did she mean to tell the truth or was she just being mean?

While the Torah values truth, it values domestic peace even more. Silence was an option. But not for my parents. My father held on to rich traditions. My mother liked testing and tasting things for herself. Although both are gone, the strings of his tallis and the pull of her hand still tethers my ambivalence. This year, I won’t fast on Yom Kippur, but I will do tashlich. As I watch the breadcrumbs take on water, I will reflect on all I have absorbed and the value of knowing my ingredients.

Rochelle Newman-Carrasco has been published in Lilith Magazine, Role Reboot, Ad Age and others. She holds an MFA in Creative Non-Fiction from Antioch University, Los Angeles.