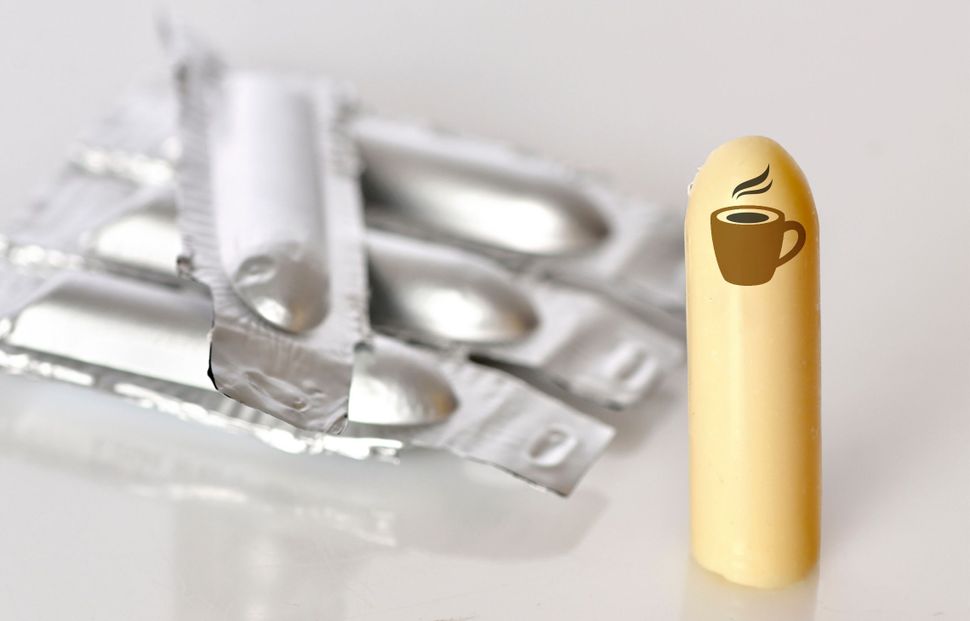 Eight years ago, the Forward wrote about the growing trend for caffeine suppositories among the devout to help get them through a day of fasting and praying, without even having to break their caffeine habit.

Since then, the trend has exploded, infiltrating every pharmacy with a sizeable Jewish (usually Orthodox) population. Before Yom Kippur, as a part of their preparation for the holy day, Jews go to their local drugstore to pick up a supply of the rectal pill, which needs to be stored in the refrigerator.

And yes, I am one of the many people who stick a pill up my rectum every Yom Kippur.

Although there are questions as to whether this is halachically permissible, in my Orthodox community, rabbis have okayed this form of relief.

For the squeamish, I can promise you that it’s life changing: Your fast will be better, your praying will be better, even your sense of spirituality (which we all aspire to on this holy day) will be better. Sure, it’s uncomfortable, but that kind of suffering is entirely appropriate for the holy day.

There are even caffeine suppositories laced with Ibuprofen. This, of course, helps relieve any other symptoms of fasting, like headaches and other aches and pains from standing too long.

However, a note of caution: Don’t overdo it. Because caffeine suppositories make you feel so incredible, almost like a superwoman (or man), who can easily take on the challenges of the day, it’s only natural that you would want to take a second, or even third dose.

One year, almost ten years ago, I was in Israel for Yom Kippur. As usual, I took a caffeine suppository that my mom made sure to bring along. I felt great: I was in the Holy Land and I could practically feel the holiness all around me, the air so thick with it I could almost touch it. But after morning services, when I got back to the apartment to rest, I felt the exhaustion spooling out of me like a rapidly sinking anchor. Wanting to approach Ne’ilah with the same vigor as I had done with morning services, I decided to take another one. Big mistake. Sure, Ne’ilah was great and spiritual, but as soon as that was over, I became overcome with a serious case of the giggles. I was hyper, talking a mile a minute and I could not stop laughing. Not on the way home, not at the breakfast meal, not even when I helped clear the table from the break fast meal. I was, to quote my mother, “toasted.”

So heed my warning: one suppository is more than enough to get you through the day. Unless, of course, you didn’t insert it properly so it doesn’t get absorbed. Then you definitely need to attempt the excruciating process again, with another dose.