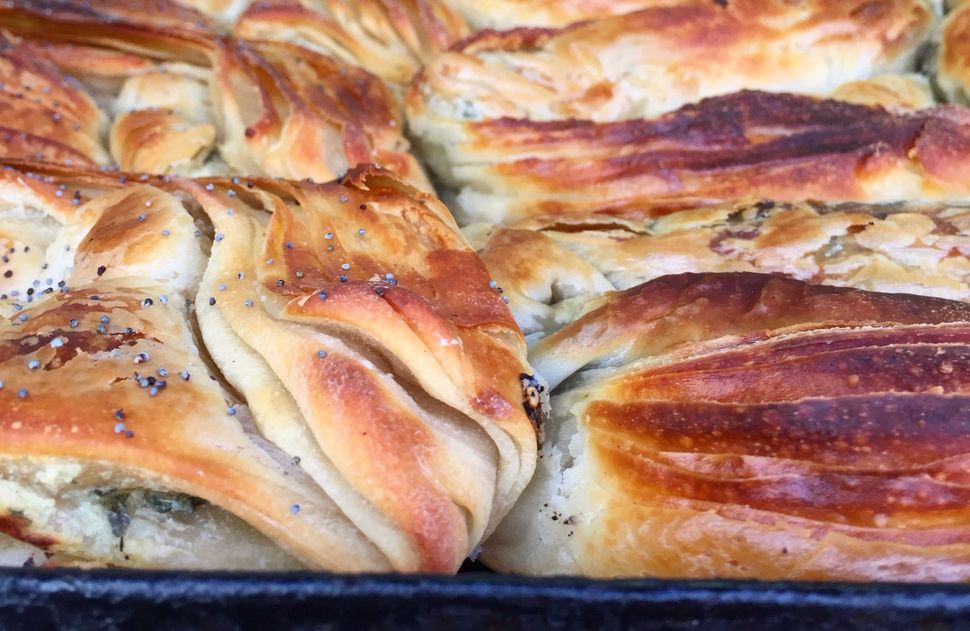 It’s an unforsaken hour and I’m flying over the Atlantic Ocean towards Tel Aviv in August. The dinner cart is making its way down the aisle, knocking elbows and dispensing hot mini pitas. I order the chicken. The answer to any question about what you’d like to eat on a plane should always include the word chicken.

I lift up the shiny foil and stare at a brown mess. It’s just sitting there, mysterious and brown. I’m hungry, so I take a bite. (I’ll spare you.) I reverse my earlier ruling about chicken and cover the small container, eat my pita and vow that my first meal in Israel will make up for this moment.

I know what awaits me, an order of Iraqi sabich that’s so large it demands to be shared, pickles, and bourekas — mostly bourekas. I arrive at a cousin’s apartment in Jerusalem just as dawn is breaking. We exchange hugs and only a few words before going to sleep. During our five minutes of conversation, I manage to slip in what’s important: “The flight was fine, I’m thrilled to be here — and I want bourekas for lunch.”

I have a deep, almost fanatical love for this flaky pastry, typically stuffed with cheese, potato, “pizza” or mushrooms and formed into a triangle or rectangle, sometimes even an arch, each shape or decoration indicating what lies within. Before falling asleep, I decide that I will set out on a trail to find the best bourekas along my journey.

One of the glories of bourekas is that they are everywhere in Israel. You can pick up the pastries, which according to the late food historian Gil Marks have their roots in the Sephardic community of the Ottoman empire, at bakeries, groceries and sometimes even makolets or corner stores. You don’t need to hunt for bourekas — but it takes work to find the good ones, still warm with a shell that will break into shards inevitably falling onto one’s shirt and making a glorious mess.

I start the trail at Machaneh Yehudah, the shuk or central market of Jerusalem. It’s lunchtime on Friday and the market is as busy as it gets all week, but I’m walking with purpose, barrelling through the main corridor searching for the drawing of a grandmotherly woman on a sign. The rich smell hits me before I’m even inside of Giveret Bourekas, or Mrs. Bourekas. Every surface of counter space is covered with trays of bourekas formed into different shapes. I go for the cheese varieties, three in all. They’re still hot from the oven. I take them to go and make it only a few steps outside of the shop before biting into one. More than the clapping on the plane as we land, or driving up the hill to Jerusalem at 5 a.m., I feel right now that I’ve arrived in Israel. 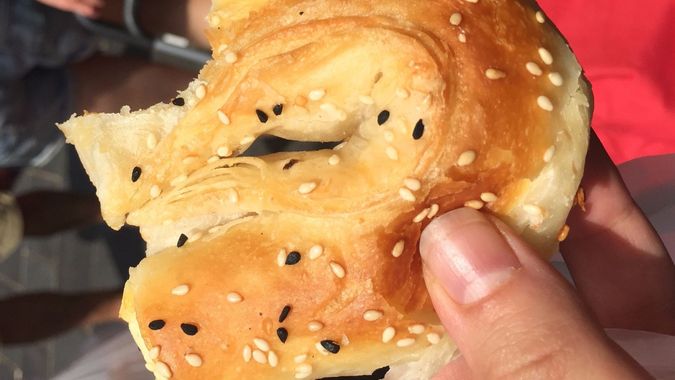 A couple of days later, I’ve reached Tel Aviv, determined to track down the large spiral borekas I spotted the summer before on a trip and foolishly did not buy. (Lesson of the bourekas trail: Buy the bourekas.) I meet up with a friend at the Levinsky Market, a shuk that builds itself each day by opening a series of store fronts on a stretch of Levinsky street that runs through the Florentin neighborhood. Without even really discussing it, she knows what I’m looking for and leads me past the rightfully acclaimed Penso Bourekas to Levinsky Bourekas, which is also known as Habourekas Shel Ema, explaining that she likes these ones with their darker crusts better. 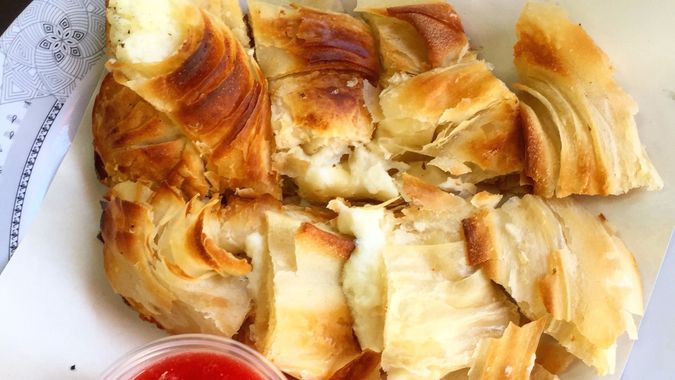 A boureka from Tel Aviv’s Levinsky Bourekas, which is also known as Habourekas Shel Ema. Image by Devra Ferst

Bourekas like these are a meal. The man behind the counter cuts the pastry into large bite-sized pieces and offers me an egg, which I decline, and a dipping well of sauce made from freshly grated tomatoes, which I gladly accept. The boreka is still hot enough to burn the roof of my mouth but I don’t care. I dive in relishing the dough, which has better defined layers than most.

A few remaining pieces of the boreka are tucked into a bag and carted on the train to Haifa, a city with excellent bourekas, but more importantly a dear friend’s newborn daughter. I gladly swap boreka hunting for time with her. My friend still manages to get bourekas on the dinner table, ones from the local supermarket’s bakery, which do the trick.

Days later I’m back in Jerusalem for my last night in Israel and it’s late — we’ve already had dinner — when I walk by where my boreka trail started. Knowing that I will be disappointed by the bourekas if I let them sit overnight and eat them tomorrow, I leave empty handed, determined to purchase a boreka at the outpost of Aroma Espresso Bar at the Ben Gurion Airport. 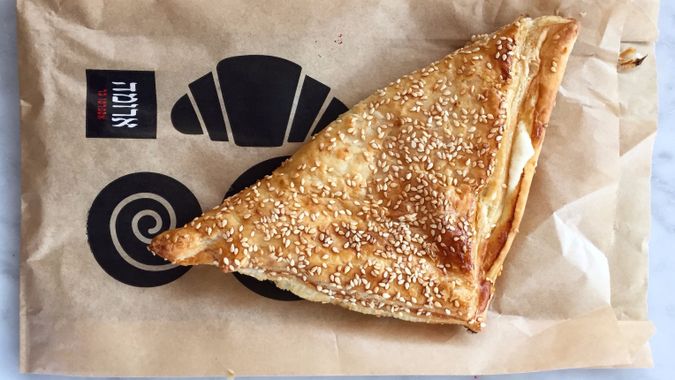 One last boureka before she goes, this one from the Aroma at Ben Gurion Airport. Image by Devra Ferst

The next morning the line at check-in is so long I worry that I’ll miss my last boreka. Thankfully, as a solo traveler, I’m pulled from the line for my security interview and make it through with just enough time to stop by Aroma. This boreka I’m handed is larger than normal, it doubles as a meal and an oversized cheese-filled triangular sendoff. I let it burn my mouth again. It sates the craving, but doesn’t match what I could have had the night before. I criticize myself for not listening to my own lessons learned along the trail: Buy the bourekas.