A Bubbe’s Bourekas To Die For 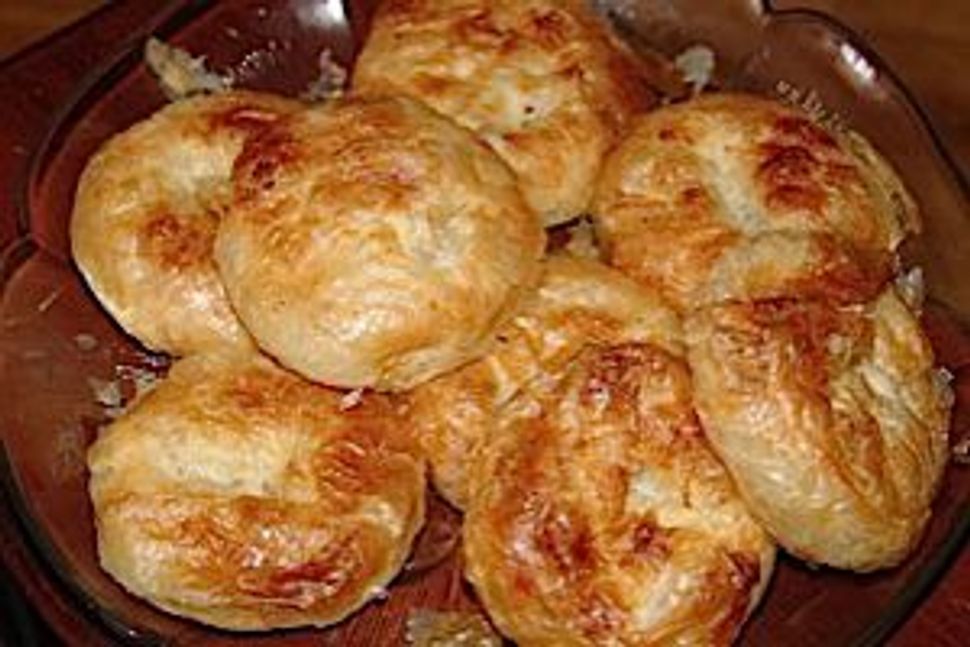 After my first column appeared last May, in which I asked readers to share their family recipes, the following email from Cynthia Tauber of San Mateo arrived in my inbox:

“A ‘boureka’ is my favorite food. Just thinking about bourekas makes my mouth water! And when I make them with my daughter, it brings back pleasant memories of my childhood watching my Sephardic grandmother baking away in her Brooklyn kitchen.”

For readers unfamiliar with a boureka, it’s a savory pie made with a variety of fillings; meat, cheese, spinach and potato are common. Sephardic Jews from many countries have their own versions, but they originally hail from Turkey, and today they have become a popular form of Israeli street food.

Tauber’s email continued: “When I make them now, they are in such high demand. However, you have to say you ‘love them’ and would absolutely die for them before we will share some with you. If you just say, ‘they are just okay,’ then you can’t have any, because we are not going to waste these delicious bourekas on you … that is how much we love them!”

Would I die for a boureka? I don’t think so. Luckily, though, after writing to Tauber, I managed to show her enough of my boureka-loving credentials so she not only invited me to see how they’re made but also freely shared Grandma Julia’s recipe. Off I went for a few hours to the home of her daughter, Joanne Brown, in Hayward.

A few words about Grandma Julia: She was born Julia Almeleh in Ankara, Turkey, in 1883. Ladino was her first language. She married Joseph Asher, who came to America in 1912; he sent for her a year later. She had nine pregnancies, but one resulted in a miscarriage and two babies died as infants, so she had six living children, one of them Tauber’s father.

Not only did Grandma Julia volunteer for the Red Cross after her husband died, but she lived to be 110. “My grandson was 3 months old when she was 100,” said Tauber.

Tauber moved with her family to the Bay Area as a child. She remembers visiting Grandma Julia in Brooklyn, and bourekas would be served with a hard-boiled egg and a handful of olives for lunch. Grandma Julia made only one kind of filling: mashed potatoes, eggs, Turkish equivalents of feta and Parmesan cheeses, and salt.

Tauber remembers a huge speckled pan filled with bourekas with a piece of cheesecloth on top to keep the flies away, resting until needed outside the window (unless it was summer, of course).

While she recalls with affection her Grandma Julia’s bourekas, as well as a ring-shaped cookie topped with sesame seeds she made called a biscocho, Tauber laughed when she told me about her maternal grandmother’s less tasty fare: Spaghetti with ketchup standing in for marinara sauce passed for a meal. While I pictured Grandma Julia brushing sheets of phyllo dough with butter or olive oil, I was completely wrong. The dough was made of flour, oil, salt and the leftover water from cooking the potatoes for the filling. This, I had never seen before.

Though Brown handed me a printed card with the recipe, both mother and daughter agreed it was mostly intuitive for them and had come from years of tinkering. Tauber and a relative watched their grandmother make bourekas enough times that they tested and tested their own recipe until they felt it was right.

Tauber tasted the cheese and potato filling several times to make sure it had just the right amount of salt. When I suggested maybe a dash of black pepper might be nice, she demurred, saying Grandma Julia never did that.

“I give my husband one for every three I eat,” said Tauber.

While making bourekas isn’t difficult, it is a bit time-consuming.

“It brings tears to my eyes when I think of her,” said Tauber. “Eating a boureka brings me back to New York when it was a much quieter time.”

While Tauber and Brown made their biggest batches of bourekas for family b’nai mitzvah, since Brown only has sons, they bemoan the fact that there is no daughter to continue the family bourekas-making tradition.

Perhaps that is why they were so willing to share her recipe.

Put oil, water and salt in a pot and bring to a boil. Allow to cool. When tepid, add flour all at once and blend thoroughly. Break off portions the size of a large walnut in diameter, and approximately 1/8 inch thick. Fill with one tablespoon of filling, and lap over like a turnover. Seal edges of overlapped dough all around so that filling will not run out while baking. Crimp edges with a fork. Brush tops of bourekas with a two beaten yolks; sprinkle with grated Parmesan. Bake in a well-greased pan in a 375-degree oven for 45 minutes or until a light, golden brown. Best when served hot, though some love them straight from the fridge. Makes approximately 24 bourekas.

A Bubbe’s Bourekas To Die For