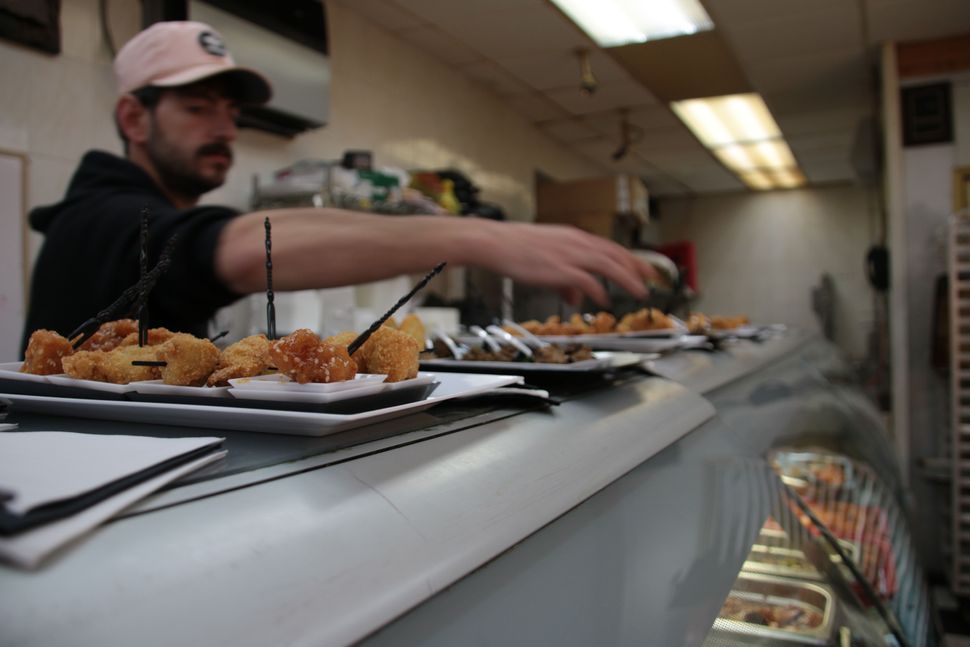 There are some places you’ll almost never find a secular Jew at. Shabbat services. A Richard Spencer rally. NASCAR. The Orthodox section of Crown Heights? Oh, most certainly not. What’s there to like — Chabadniks recruiting you to the yeshivah? A constant sense of aesthetic displacement? Food that way too closely resembles your great-grandmother’s chopped liver?

When it comes to food in Crown Heights, it turns out there’s a lot more to like than your bubbe’s chopped liver.

This weekend, I attended “A Taste of Crown Heights,” Crown Heights’ inaugural kosher food crawl, and confronted my negative perceptions and taste buds head-on. As if to stack the cards even further against the local eateries, I recruited the only other Jew I knew to be the grandson of a kosher butcher, yet remain even less inclined to gorge on “Jew food” — my brother, Justin.

On Sunday, we emerged from the Kingston Avenue subway to find ourselves in a brave new world. As far as the eye can see, we were in the only men without tzitzit and a firm grasp of kashrut laws. Chabadniks swarming to give us tefillin? Check (three times); one guy easily called my bluff when I tried to ward him off by claiming I had “a little tefillin” earlier that day.

But whether it was the plan of Hashem or two davening schmos (or both), divine gastronomic miracles had come to be. Crown Heights’ kosher food crawl was organized by Shmuly Wolff, the co-founder and CEO of JMenu, an emerging app that seeks to become the GrubHub of the kosher world, and J.J. Hecht, the director of Toys For Hospitalized Children. Born and raised in the neighborhood, the pair saw the local food scene “explode” in recent years, and they felt a burning desire to show it off to the kosher world. “When I was a kid, there was one pizza shop, a burger shop, and a cafe,” said Wolff. “Now, we have 20 vendors [participating in the crawl] and we haven’t even included everyone.” Sponsors included COLlive.com and Hal’s New York Seltzer.

Hosting visitors from far-flung places like the Five Towns, Flatbush, the Upper West Side and New Jersey, the Crown Heights food scene rose to the occasion on Sunday to assert its rightful place. “We are becoming the center of kosher food in New York,” said Wolff. “It’s not even a question.” By all accounts, the food lived up to the hype. Alongside modern-day perfections of traditional foods like shawarma and deli meats, vendors offered kosher takes on cuisine ranging from sushi to ice cream and beer. The melding of disparate influences with Crown Heights’ Orthodox identity was distinctly Brooklyn in its own unique, surprisingly hip way.

As Hecht and Wolff described, the intimate nature of the Crown Heights community allowed the three-month development of the food crawl from embryo to full-blown fleishfest to go seamlessly. Over 20 vendors signed up to offer their food for a greater cause; 100% of all proceeds of the event went to benefit Hecht’s Toys For Hospitalized Children, which does exactly as it sounds like — 10,000 times over in 100 hospitals and special needs facilities across 10 states per year. This partnership among organizers and vendors transcended mere self-promotion; these were lifelong neighbors supporting one another for a greater cause. 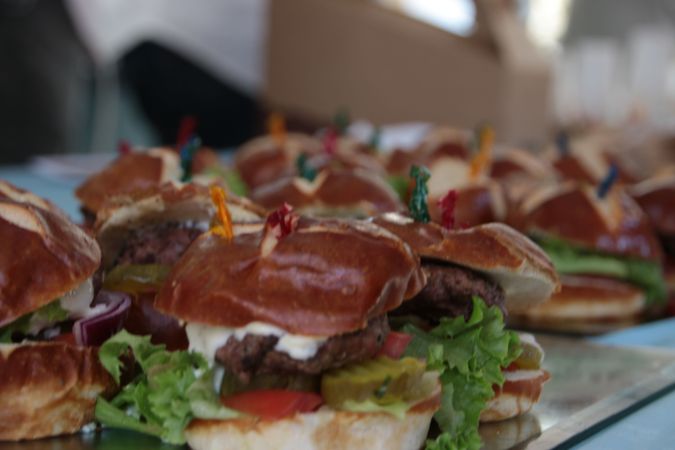 In just its first year, the event went without a hitch. According to the organizers, there were over 350 participants — well above expectations. The communal atmosphere was inescapable, as friends barged into each other at every joint we visited. Even Justin and I — the clear outsiders among everyone — were embraced by several of our foodrades-in-arms by the end of the three-hour gastromarathon. “It was a warming feeling to see that kind of tight-knit community, which is rare to see in New York City,” said Justin.

Despite the extensive list of vendors, the food’s high quality remained remarkably consistent. Nevertheless, the masses and expert judges were forced to decide the best in several categories, and The Forward’s panel of two agreed on on all three choices. Boeuf & Bun, winners of The Expert’s Choice Award, topped juicy, old-fashioned burgers with an eclectic array of condiments like truffle aoli and bondi sauce to produce frantic lines reminiscent of Jerusalem Central Bus Station. The People’s Choice Award for best restaurant, Mendy’s, delivered a scrumptious array of Middle Eastern delights, including heavenly falafel which provided a perfectly crunchy outside and a smooth, soft inside. The best takeout winner, Koshertown, wowed my brother into disbelief that (1) he seriously entered a grocery store called Koshertown, and (2), the spread of said grocery store — which included hot dogs, salads and sauces, among other food items we frankly didn’t know what to call besides “delicious” — was fantastic.

Though these three food joints claimed the hardware, the glory extended across the entire kosher food community. It was the dishes at Table One Catering — which tailors towards higher-end delights — that sent my brother into a full-blown identity crisis. “How is that kosher?!” he exclaimed in disbelief. “It’s too good to be kosher!”

Who knew kosher could be so good? Well, who else but Crown Heights’ residents knew of kosher preparations of braised duck? Who thought sushi chefs would flock to an Orthodox enclave and tailor their raw fish preparations for the Hasids among us? And for Hashem’s sake, who would expect such damn fine wine (and bourbon!) at Eber’s a few blocks from Chabad central headquarters?

After the massive philanthropic and gastronomic success at Crown Heights’ food crawl, word will surely spread among all the shuls where to find the best kosher food around — and for us tefillin solicitees, that there is even such a thing. “There’s really good kosher food out there!” exclaimed Justin, the long-time Jew food agnostic. “Who knew? Very tasty, very diverse. I can’t believe I’m saying this… but I would come back!”

As he learned to say — not with tefillin, but a burger in hand: Baruch Hashem.