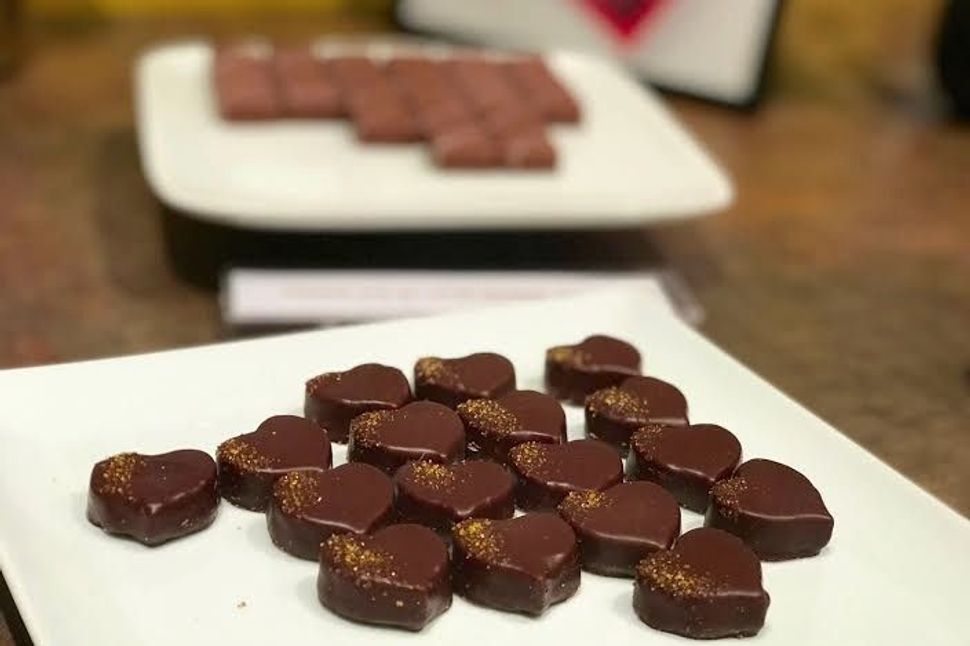 Last night I attended a delightful little party at French boutique chocolatier La Maison du Chocolat, to celebrate the upcoming release of four new chocolates that will be introduced in January, for Valentine’s day.

While I’m more focused on Thanksgiving and Hanukkah food at this point, who could pass up such a tempting invitation?

The chocolates were exquisite, the champagne was flowing, and the mood, as you may imagine, was happy.

On the way to the shop on Madison Avenue (there are four New York locations, as well as numerous boutiques in France, the U.K. and Asia) I got in touch with chocolate expert and Forward contributor, Rabbi Deborah R. Prinz. I wondered if she knew of a Jewish connection to Maison du Chocolat, which was founded in Paris in 1977 by Robert Linxe, who was born in Bayonne, France.

Prinz is the author of “On the Chocolate Trail: A Delicious Adventure Connecting Jews, Religions, History, Travel, Rituals and Recipes to the Magic of Cacao” (Jewish Lights Publishing, 2017). (The 2nd edition of the book was released in October.) She is also co-curator of the exhibit “Semite in New York City through February of 2018.

While Prinz couldn’t offer a clear connection, she wrote me that “in a roundabout way, of course, all French chocolate has a Jewish connection, since Jews brought chocolate-making to France.” She reminded me of a post she wrote on the topic, called “That Time Jews Smuggled Chocolate To France.”

Chocolate, it turns out, is not only a sweet treat but also a fascinating topic, especially the Jewish connection as Prinz presents it in print and in her show. And at Kosherfest today, Prinz discovered a number of brand new kosher chocolates — so stay tuned.

Chocolate tasting in the name of Jewish historical research — have I mentioned I love what I do?

Liza Schoenfein is the food editor of The Forward. Contact her at schoenfein@forward.com or on Twitter, @LifeDeathDinner