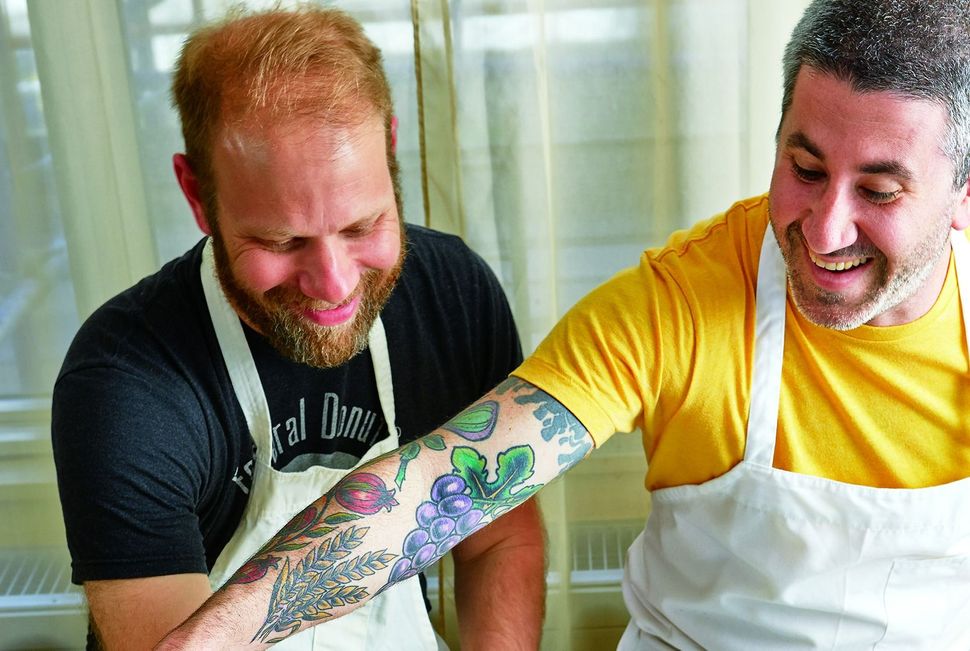 Time To Make The Doughnuts: The only thing better than tossing fresh doughnuts in flavored sugar is doing it with a friend, say Steve Cook (left) and Michael Solomonov, who are doing just that. (Use your imagination.) Image by Michael Perisco

It was thoughtful of the James Beard-Award winning chef Michael Solomonov and his business partner, Steve Cook, to come out with the “Federal Donuts” cookbook close enough to Hanukkah that I could write about it within the context of the holiday.

The book, so says its cover, is “the (partially) true, spectacular story” of Philadelphia’s cult-favorite eatery Federal Donuts. The book is designed kind of like a comic book — if comics had photos of real people and situations instead of drawings of make-believe characters and situations. Within its vivid pages, there are recipes for the doughnuts and fried chicken that make up the Federal Donuts menu. There are also how-tos, fun facts (and fictions) and silly stories that take the form of dialogue among the partners. Said dialogue was recorded by editorial mastermind Dorothy Kalins, who produced the book. Kalins also worked on “Zahav,” Solomonov’s autobiographical first cookbook, named for his flagship restaurant. (Federal Donuts is to Zahav what Danny Meyer’s Shake Shack is to his Union Square Café.)

How does all this relate to Hanukkah?

The holiday is, after all, when it is incumbent upon us to eat fried foods to mark the miracle of the oil. And while latkes are the most common, there are also sufganiyot, which Israelis (and increasingly, Americans) consume over the course of the holiday.

And what are sufganiyot, I reasoned, but filled doughnuts? (The careful reader might note that we are using the Webster’s spelling of “doughnut” here, while respecting Federal Donuts’ right to use its own.) So having made the Hanukkah-to-sufganiyot-to-Federal Donuts connection, I enthusiastically asked Solomonov if he could talk about it with me — whether there was any link between those Israeli-style balls of fried dough and the cake doughnuts made fresh throughout the day at Federal Donuts.

“I wish I could,” he said, “but it would be such a stretch to include sufganiyot as the inspiration of a boardwalk-style doughnut.”

This wasn’t going so well.

“I did grow up eating sufganiyot, definitely,” he said. “In Israel everybody just buys a box of them and you have a greasy box from whenever — you don’t really know when they were made.” Okay, I see why one might want to distinguish between those things and the fragrant, fresh-from-the-fryer confections that are highlighted in the new book. So what would Solomonov be making for his kids this Hanukkah?

“I’m a potato pancake sort of guy. Latkes, they work for me,” he said. “And we fry challah dough and stuff it with jam.”