Time to Make the Doughnuts 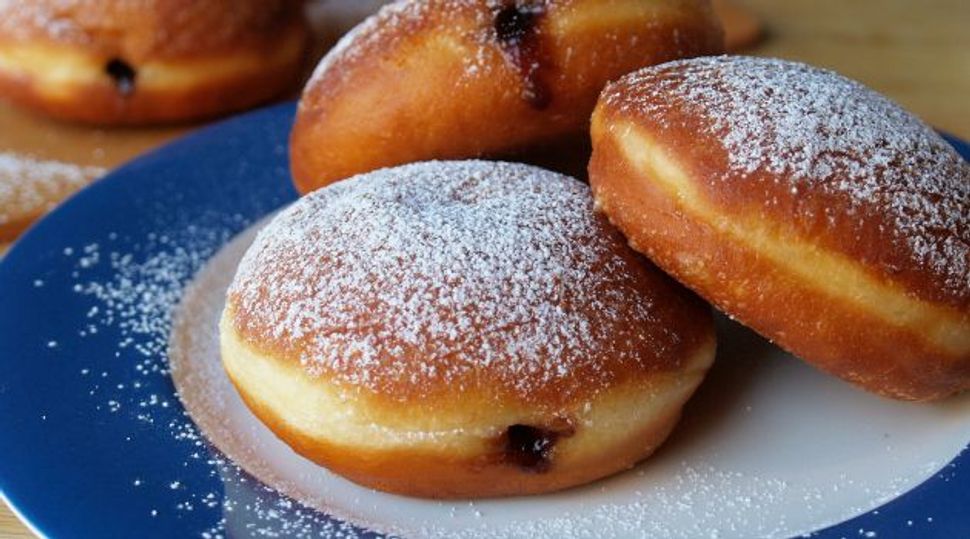 An Israeli friend had emailed me his recipe for jelly-filled sufganiyot doughnuts, and I snuck out of work early that fateful day to gather the supplies necessary for an evening of frying. Flour, sugar, yeast, milk, eggs. A gallon of oil. A jar of jam. And a new turkey baster.

We were ready to roll. Literally.

I sprinkled flour on the counter. He grabbed the rolling pin and set to work. The slightly soft dough yielded to the pressure, spreading out across the granite. I grabbed a glass from the cabinet and cut circles out of the dough. He gathered the scraps and re-rolled them. I cut out more circles.

He floured a pair of cookie sheets and gently lifted the rounds from the counter and slid them onto the sheets. An hour later, the flat rounds had become nice and plump, with a slight jiggle when I reached out to touch their smooth skin.

I filled a heavy pot with oil and when it started to bubble, we dropped the first scrap in. It browned up fast with a flood of bubbles. We lowered the heat. The second and third scraps quickly browned too. We lowered the heat again. And then lowered in another scrap. It floated on the oil, staying pale and wan. We turned up the heat. With the fifth scrap came a flurry of teeny tiny bubbles and a slow trickle of larger ones. The triangular scrap puffed up even more, turning golden and then coffee-with-a-touch-of-milk brown.

A quick taste and we knew we were ready for the real deal.

My friend scooched the first doughnut towards the edge of the cookie sheet, helping it along with a spatula, and slid it into the oil. A quick bob in the oil and then a float, turning golden to brown, and it was ready to be flipped. A few more minutes and I transferred the inaugural sufganiya to the paper towel-lined countertop.

As the counter grew crowded, I grabbed a cooling sufganiya and, armed with the turkey baster, poked a hole in the side and filled it with jam. We tore the pastry open and, between mouthfuls, filled the rest. The sufganiyot didn’t last very long — my co-workers took care of that — but the scent of fried dough lasted a full eight days.

Time to Make the Doughnuts