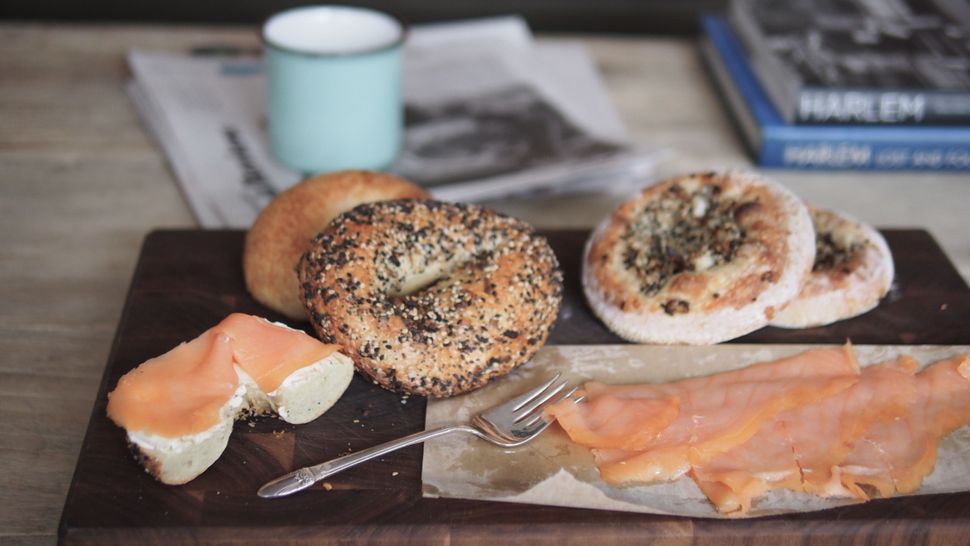 Harlem residents no longer have to leave the neighborhood to find authentic, handmade bagels. Image by Liza Schoenfein

Walking home from the gym on West 116th Street I spotted Bo’s Bagel’s, a new place I’d heard about recently. Hungry and curious, I stopped in. The shop smelled exactly the way I remember the dearly departed Upper West Side H&H smelling — toasty and yeasty with faint notes of baked sesame and poppy seeds, onion and garlic.

This, it seemed, was the real deal.

I went to the counter and ordered coffee and an everything bagel with cream cheese, along with a couple of bialys, more bagels and some smoked salmon to take home. There were three varieties of cured and/or smoked salmon along with a wide assortment of cream cheese flavors including the usual scallion and veggie and the (highly suspect!) chocolate chip and maple walnut. The shop and café also offers egg and deli sandwiches and a variety of beverages including cold-brew coffee. 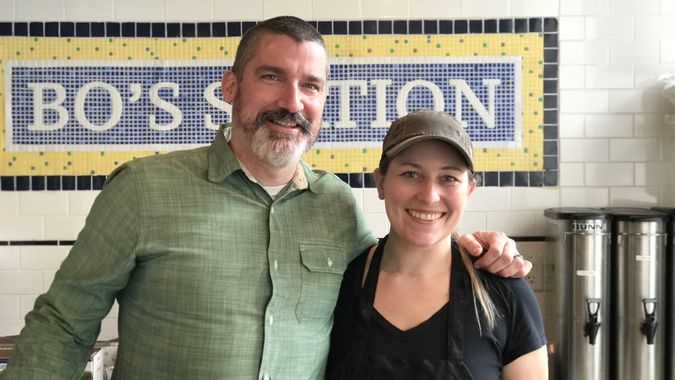 Andrew Martinez and Ashley Dikos opened their shop on 116th Street after selling their bagels at a Harlem farmer’s market. Image by Liza Schoenfein

I asked the woman behind the counter, Ashley Dikos, how long the place had been open and we began talking. Dikos said she opened the shop with her husband, Andrew Martinez, in the spring of 2017. The couple have lived in Harlem for nine years, and Martinez began making his own bagels at home because he couldn’t find a decent one in the neighborhood. As he worked to perfect his recipe — they are made the old fashioned way: fermented for up to 24 hours before being boiled and then baked — the pair hosted regular brunches, until Martinez’s mother suggested that they sell his creations.

Good sons listen to their mothers.

In 2015 Dikos and Martinez began selling their bagels at the Harvest Home Farmer’s Market on Lenox Avenue. The bagels were popular and the business expanded, and Bo’s Bagels was born. The name is a combination of the first initial of Martinez’s children’s names, Brody and Olivia — and also their dog, Bowser. 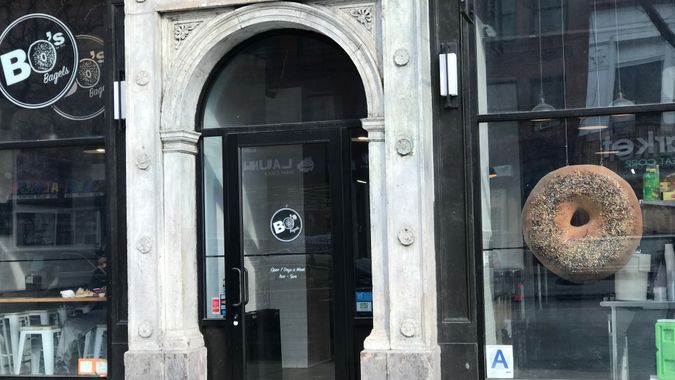 There’s no mistaking what’s inside this Harlem storefront. Image by Liza Schoenfein

Okay, good story, but how are the bagels?

I’m telling you, they were fantastic. Crisp on the outside; chewy (and still slightly warm) on the inside. Big, but not too big. The guy who recommended the place to me had said that the bagels were great but the bialys were phenomenal. Entirely full from my bagel but dedicated to my research, I sampled the bialy. The circular well of these golden beauties is deeper than most, and generously filled with a moist, robustly flavored mixture of cooked onions and garlic and a variety of seeds. They are, indeed, phenomenal.

Wooh-hoo — fresh bagels and bialys are being made in Harlem! Welcome to the neighborhood, Bo’s Bagels.