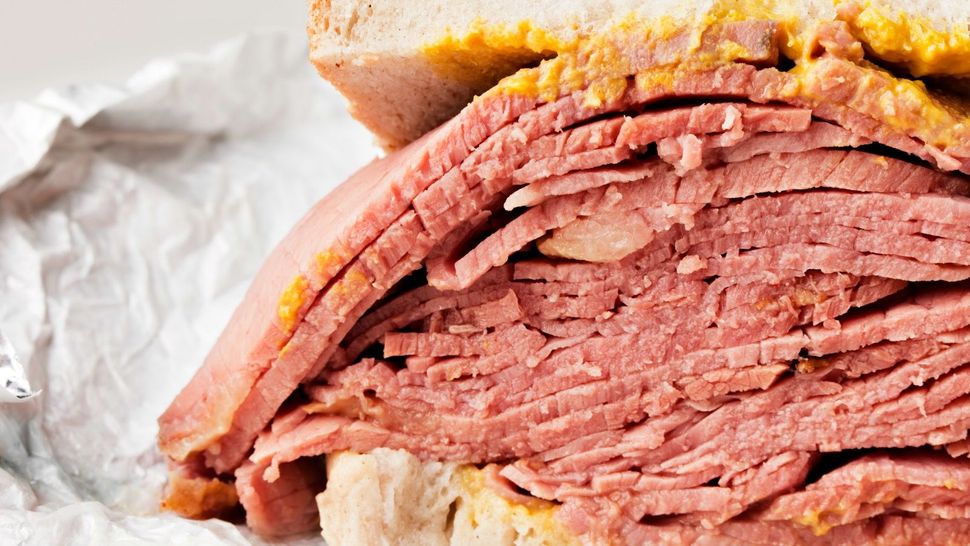 A classic pastrami sandwich on rye. Image by NicolasMcComber/istockphoto

Here’s a short list of Jewish delis where you might least expect to find them. Call it the “Who Knew?” list. And if we missed any, please let us know!

Bernstein’s, Winnipeg
Close your eyes and inhale: Inside Bernstein’s, Manitoba might as well be Manhattan’s Lower East Side. Thick corned beef is made in-house, fragrant rye bread comes from local fave Gunn’s Bakery, and homemade soups like matzo ball steam in their bowls.

Shlomo’s, Aspen Think about it: Latkes, mushroom barley soup and a pastrami sandwich actually make perfect apres-ski noshes. And no one in the mountains of Colorado does them better than Shlomo Ben-Hamoo, who left Israel for Aspen to spread deli love among locals and tourists. Bonus: Bagels are house-baked; cheesecake and meat gets flown in from The Big Apple. 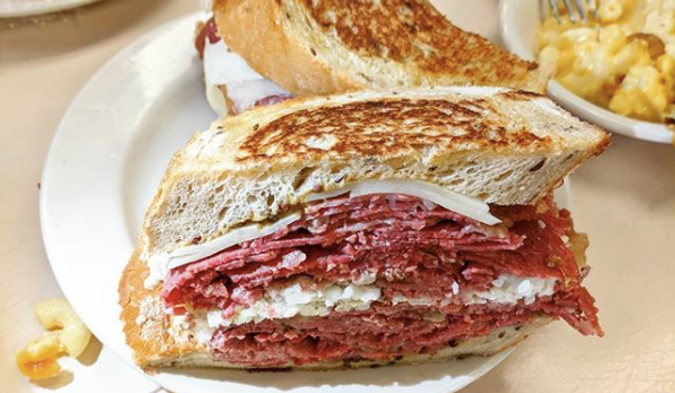 This corned beef, coleslaw and cheese concoction was created by a Shapiro’s customer, according to the Indianapolis-based deli’s Instagram. Image by Instagram/@Shapirosdeli

Shapiro’s, Indianapolis
After 110 years, Shapiro’s is legit old-school, and — thankfully — still does things the way founder Louis Shapiro did back in the day. House-smoked meats and lush cheesecake round out a menu that mixes nostalgia and now; how many places still serve noodles with sour cream?

Kenny & Ziggy’s, Houston
For their title subject, the makers of 2014’s “Deli Man” didn’t just look to Brooklyn or L.A. Their archetypical deli maven was Ziggy Gruber, who keeps tradition deliciously alive at his two Houston restaurants. We’re talking classics like kishke, farfel, gefilte fish and flanken — deep in the heart of Texas.

Charleston Bakery & Deli, Charleston
“If the divine creator has taken pains to give us delicious and exquisite things to eat, the least we can do is prepare them well.” Here, that translates as house-made knishes and pastrami, tongue on rye and lush chopped liver. Bonus: The deli’s web site offers a food-focused “Guide to Paying a Shiva Call.”

Momma Goldberg’s, Alabama
We know he’s got a Jewish lawyer. And if Roy Moore ever gets a hankering for pastrami on “Jewish rye” or a whole kosher pickle, he can head to a Momma Goldberg’s location. The “kosher-style” chainlet’s got a wide-ranging menu — pork and ham share space with that Jewish bread — but this is as close as it gets to New York deli in Alabama.

Gruman’s Deli, Calgary
Montreal and Toronto get the deli glory, but western Canada actually has a rich Jewish history. Named for owner Peter Fraiberg’s Bubby Gruman, this downtown Calgary mainstay dishes up latkes, potato “verenikes,” chopped liver and a mean smoked-meat poutine to a diverse crowd of locals. Quirk: Gruman’s is only open from 10 a.m.–3:30 p.m. on weekdays; from 9 a.m. on weekends.