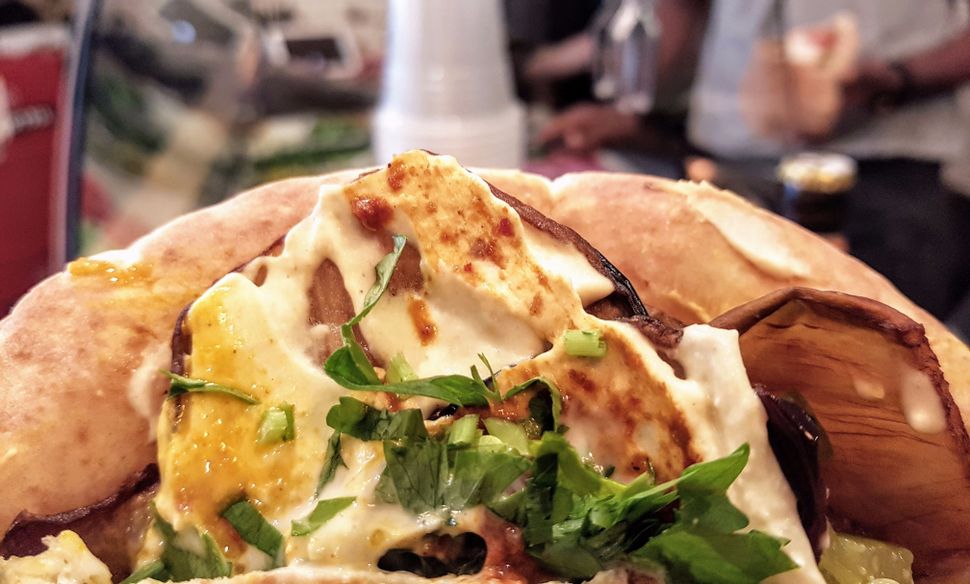 Falafel and hummus are points of contention in the culture war between Israelis and Palestinians. Each side makes the argument for their people’s claim to the dish. But while shakshuka has already been embraced as an Israeli culinary phenomenon in the United States, another uniquely Israeli eggy fast food is less familiar outside the country: the humble sabich.

The sabich sandwich is comprised of hard-boiled egg, fried eggplant and salad layered inside a pita, typically with a smear of hummus inside and a drizzle of tahini on top.

A long-held folk etymology ascribed the name of the sandwich to its constituent parts: salat, beitza and hatzil (salad, egg and eggplant). A new children’s book sets the record straight, however, and credits the sabich’s invention to an Iraqi Jew living in the Tel Aviv suburb of Ramat Gan, who struck upon combining leftovers from traditional Iraqi Shabbat meals as a snack for bus drivers. His name: Tzvi Halabi — but he went by the nickname “Sabich.”

Udi Goldschmidt, chairman of the Israeli Association for Culinary Culture, said that the Iraqi origins of the proto-sabich are fuzzy, and “tachles [bottom line], it appears to have grown up in Israel.” He explains that eggplant is in season year-round in Israel, and eggs are cheap and were available during the state’s early days of food rationing.

“Everything in Israel gets put in a pita with hummus, tahini and a little salad” and transforms into an Israeli national food, he said. “So now you’ve got a very Israeli meal because it doesn’t exist anywhere else in the world.”

Since its invention in 1960s Ramat Gan, the sabich has gained national popularity. Sabich shops like Aricha Sabich on Jerusalem’s Agrippas Street have grown nearly as common as falafel vendors. Aricha Sabich’s owner, Itay Aricha, opened shop in 2014 and has been slinging sabich in his signature flatcap ever since.

“Anyone can fry eggplant or bake pita, that’s not a problem,” he said. Not every place layers the ingredients properly so that every mouthful is packed with the mélange of flavors, he argues.

In Israel, Sabich now appears on the menu at the omnipresent café Aroma (gentrified and served on sliced bread instead of a pita). And as Israeli cuisine has risen to new heights in recent years, the humble sabich has also found itself transformed into gourmet dishes at fine restaurants.

At Adom, a high-end eatery at Jerusalem’s First Station complex, Chef Elran Buzaglo concocted a deconstructed reinterpretation of the classic. Instead of fried eggplant, Adom’s is roasted, hummus is replaced with whole chickpeas, amba — a pickled mango sauce commonly added to sabich — is found in the form of an aioli, and the egg is poached instead of boiled. The result is a creamy, lighter version of the familiar original.

“It’s one of the flagship dishes of the restaurant,” said Osher Birger, a manager at Adom. “People really expect street food, and when they receive this dish they’re excited by the fact that it’s not heavy, not fried, and the reactions to it are enthusiastic.”

Some of the Israeli restaurants that have opened in the U.S. in recent years have started introducing sabich to the American public. Michael Solomonov’s New York location of Dizengoff offers his version, Einat Admony features Sabich on Taïm’s menu, and Timna loads a hardboiled egg and charred eggplant into a croissant on its brunch menu.

For Aricha, his dream is to open a sabich stand like the one he has in Tel Aviv’s Mahane Yehuda market in New York City. “People are hungry for this exact thing,” he said.