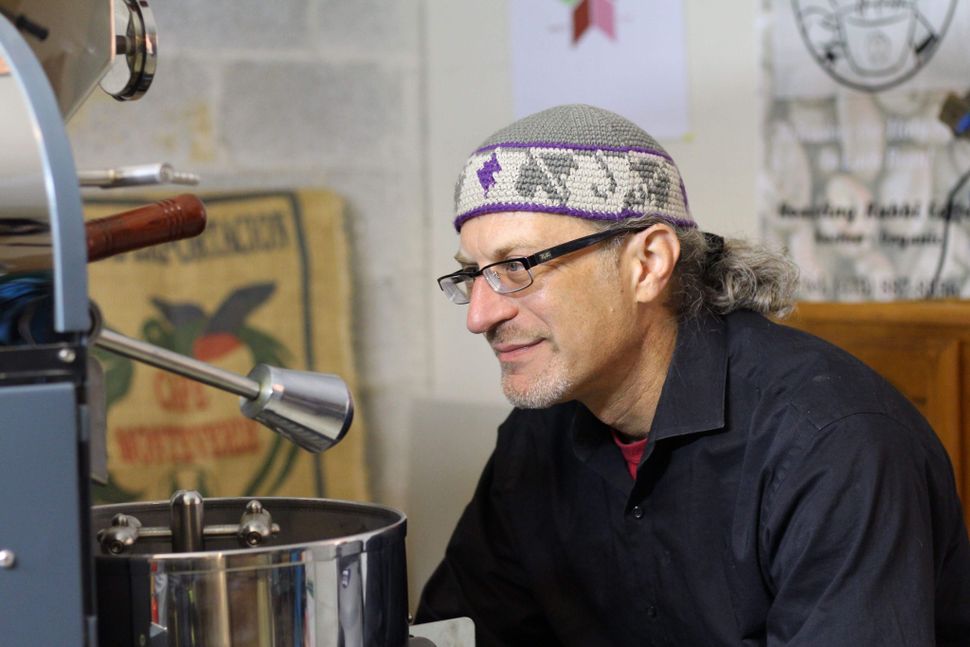 Legend has it that coffee was born on one auspicious day in 6th or 7th century Ethiopia — or so Rabbi Micah Becker-Klein tells me — when a goat farmer named Kaldi noticed that his goats were acting livelier than their usual sluggish selves. The goats had been eating red berries. Kaldi tried some himself and found himself feeling awake, probably for the first time in his lonely, goat-herding life.

In the 12th century someone brings these berries to a sufi monastery. The monks reject the berries, violently crushing them and throwing them into the fireplace. Somehow, some of the monks ended up drinking them and the monks were kept alert for hours.

“That’s midrash,” Becker-Klein tells me. “The story is almost biblical in nature. Like, there’s Moses!”

Becker-Klein is following in that very tradition, with his new brand of artisanal coffee, Roasting Rabbi Coffee.

Becker-Klein grew up in the suburbs of Philadelphia. He spent his gap year in Israel and headed for the Jewish Theological Center at Columbia shortly afterward, interested in learning the hands-on, ins and outs of Judaism. He raided every library, looking for every book he could find on Jewish attitudes to food and the organic, sustainable farming values of today. He wanted to eat well, ethically.

“I like coffee,” Klein tells me, and then quickly amends: “I love coffee.”

He runs a synagogue in Bennington, Vermont, and is a Jewish Studies instructor at the University of Delaware. His rabbinic training informs every aspect of his coffee business. Some examples of Jewish ethical coffee farming, for Becker-Klein, include the idea of rotating the crops, keeping the soil enriched in a sustainable rotation, and the concept of the shemittah year, letting the field rest on the seventh year.

Roasting Rabbi is a fairly new commodity in the coffee world. It opened for sales in November 2017, but it was five years ago that Becker-Klein caught the coffee roasting bug. “I like the hands-on approach to food,” he says, describing his slow descent into the world of professional, homebrewed coffee. “I started roasting in-house on an air type of coffee. I upgraded to a homebased roaster that did one pound at a time. Then I started researching commercial coffee roasters.”

Commercial coffee roasters can cost anywhere from $3,000 to $58,000, depending on the amount of beans you need to process.

Becker-Klein has a 1 kilogram roaster, a tiny size when it comes to commercial coffee. But he wanted it that way. “I make artisanal, smaller amounts of coffee,” he tells me. Selling small amounts allows him more control of the coffee-making process, allowing him to get as close as he can to his connections. “You have to maintain a line from the [coffee] farm to the ship to my roaster,” he says. Selling in these small amounts allows him to ensure that check out the farming communities that he is purchasing beans from, to ensure that the coffee is created ethically and that everything is made as close to Jewish values as humanly possible.

“Not every company is paying their workers fairly. I’m not going to talk bad about these companies,” he says, “But they aren’t great.” Maybe Becker-Klein won’t, but I can.

So how does Becker-Klein decide where he will source his beans from?

“Is it highly rated?” he says. “What’s the coffee cupping ratio? Where’s it being produced?”

There is a 100-point scale system for measuring the quality of a coffee; Becker-Klein won’t purchase anything rated below an 80. In a lot of ways the small, insular world of coffee grading is a lot like the wine world, with a select group of connoisseurs (in this case the persnickety old fogeys down at the Specialty Coffee Association of America) analyzing flavor wheels and tasting for flavor bouquets and chords that will decide which java is a hot commodity and which isn’t.

“One thing I wish people knew about coffee is it really is a unifier,” says Becker-Klein. “Jewish, Muslim, Hindu, Christian…everyone drinks coffee. This idea of a [cafe, a] community gathering place…a bunch of people dialoguing and drinking coffee and help manifest change in the world.”

Becker-Klein’s biggest dream is to open up a peace cafe that would facilitate these kinds of dialogues.

“One of my coffees is sourced from Sumatra,” he tells me. “These women coffee producers, each owning a small amount of land. 60 or 70 people get together and create a coffee field. That’s empowerment. That’s being committed to sustainable practices.”

I’m curious how Becker-Klein found these women. The coffee world is small when you’re limiting yourself to fair trade, organic, ethically sourced fare from coffee cooperatives, is what he explains to me.

“10% of profits are donated to grassroots peace efforts,” Becker-Klein tells me. “When I do events, that 10% goes to the synagogue’s social action team. Otherwise, they go to Peace Drums.” Peace Drums is an organization that teaches Jewish, Muslim and Druze children how to play steel drums in pursuit of world harmony.

It’s time to feel good about drinking coffee, one blessed cup at a time.