The One And Only Kosher For Passover, Fairly Traded Chocolate 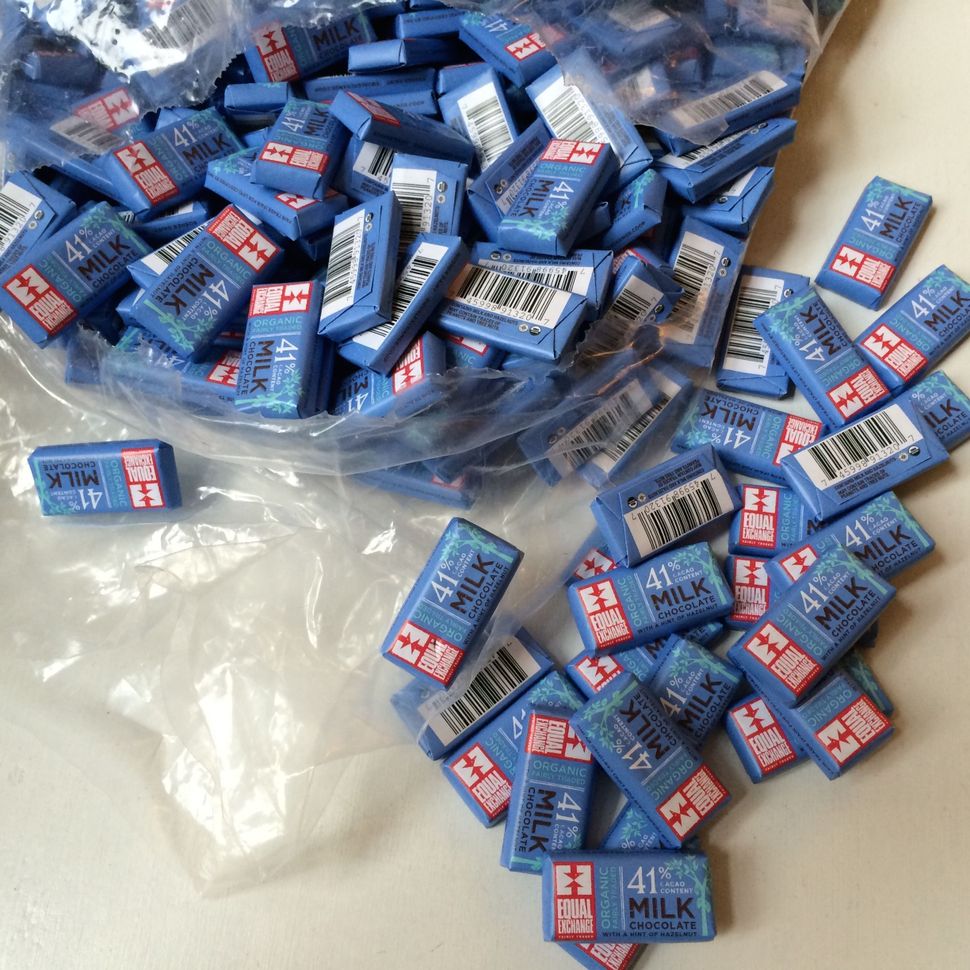 The only formally certified fair trade and kosher for Passover chocolate of recent years, no longer exists, exactly. In 2013 some of the chocolate bars made by the fair trade Equal Exchange Chocolate were certified kosher for Passover. This first-ever Passover kosher/fair trade certified chocolate combo resulted from a project initiated by Ilana Schatz, Founding Director of Fair Trade Judaica, joined by T’ruah: The Rabbinic Call for Human Rights (called Jewish Fair Trade Project). It became very popular with rabbis, educators, synagogue leaders, and chocolate lovers who welcomed this unprecedented opportunity to express Passover’s values of freedom from oppression alongside formal fair trade certification’s opposition to child and slave labor. My audiences around the country were excited to learn that they could combine their ethical and ritual values in this sweet package. The Rabbinical Assembly added the selection of Equal Exchange chocolate to its Kosher for Passover list in 2014. For Passover 2017 Equal Exchange gathered its selection of bars into its first Seder host gift box.

However, last summer Rabbi Aaron Alexander, who had pioneered this Kosher for Passover certification (hechsher), told me that he was not sure that he could continue to do so in 2018. This, even though the most important item on the wrapper for Alexander is not the Passover certification but rather the fair trade insignia. Alexander, rabbi of Adas Israel Congregation in Washington DC, a member of the Rabbinical Assembly’s Committee on Jewish Law and Standards, serves on its Kashrut Subcommittee. Despite that affiliation he was more worried about chocolate’s fair trade connections.

When Schatz reached out to Alexander about creating this fair trade/kosher for Passover opportunity for the Jewish community, he readily agreed and did so as a volunteer. As he recalled in a phone interview: “it … seemed to me that particularly on Passover in which we are marking an important stop along the journey from slavery to freedom, that the religious choices we make along the way ought to reflect that aspiration.” There had been kosher options but until then, no kosher for Passover ones. Rabbi Jill Jacobs, T’ruah’s Executive Director, sought to align the values of Passover with her organization’s anti-slavery commitments. In particular she admonishes: “chocolate should not be plagued by child slavery.”

In order to kosher-certify Passover’s slave free chocolate, Alexander initiated a specific protocol and followed it each spring since. Schatz provided him with a list of the relevant Equal Exchange chocolates. He then spoke with the Equal Exchange staff about the ingredients. After that he checked in with the mashgiach, the rabbinic supervisor at the plant in Switzerland, Rabbi Abraham Hochwald, Chief Rabbi of the Northern Rhine-Germany. Ohen the mashgiach had assured him there was no chametz/leavening in the bars, only then would Alexander authorize that, if bought prior to Pesach, the fair trade certified chocolate bars were considered kosher for the festival. (Kosher for Passover stickers have been available on-line). Interestingly, Alexander received no pushback about creating this hechsher. On the contrary he reported that modern orthodox segments of the community were very intrigued with this new combination of ethical and ritual chocolate.

**Why Fair Trade Chocolate for Passover? **

Admittedly chocolate is a luxury in our food supply and food justice challenges apply to many other products. However, Schatz, along with Jacobs agreed that fair trade kosher for Passover chocolate would be a natural fit for their respective fair trade and anti-trafficking work. They developed the partnership of Fair Trade Judaica Project to further this advocacy. Their focus on chocolate made the goals of fair trade–improving living standards of farmers and eliminating child slavery–more accessible to buyers, even possibly fun. As Rabbi Kahn-Troster, T’ruah’s Deputy Director, noted: “Pesach is really troubling for people. It is a holiday fighting against slavery, yet we know that there are trafficking issues in chocolate. Fair trade means you know that it is not tainted with child slavery … .”

It turns out that unknown to its Jewish community partners, Equal Exchange dropped its formal fair trade certification in early 2016. This surprised Alexander and the Fair Trade Judaica Project partners. They only learned about it just after Passover this past spring. Last April, I reworked material about prioritizing our Jewish values in our chocolate choices for the second edition of my book. I knew that consumers depend on third party certifications to investigate the supply chain which an individual cannot sleuth out. I also understood that attention needed to be paid to the more than two million children working in hazardous conditions in cacao-growing regions, according to the findings of the 2013/–2014 Survey Research on Child Labor in West African Cocoa Growing Areas, compiled by Tulane University’s Payson Center for the United States Department of Labor, released in 2015. I scoured websites and packages for certifications to assess ethical chocolate options and looked closely at the packaging on some of my left over Passover Equal Exchange bars. When I scrutinized my Equal Exchange bar from Passover 2017, I found informative text about a cocoa farmer, the logo for the Swiss kosher certification, the percentage of cacao, the country of origin of the chocolate, an organic certification, and more. Yet, I could not locate the fair trade label. Not only was I sure that I had seen the fair trade certification on the bars, I could verify it on several older wrappers in my collection. Oy, what had happened to it?

As I learned, Equal Exchange had shifted from one fair trade certifier to another, from Fair Trade USA to IMO Fair For Life certification in 2010. Then in the winter of 2016, the formal Fair for Life certification was dropped by Equal Exchange. For two years the Fair Trade Jewish Project and in turn Jewish community leaders and consumers had been inadvertently promoting Equal Exchange at Passover as the go-to option, totally unaware that it was no longer fair trade certified. And, prior to Pesach, 2017, I had published several stories lauding the project, most recently at the Forward. Ironically, as the commitment to Fair Trade chocolate for Passover grew in the Jewish community, Equal Exchange had become disenchanted with the politics of formal fair trade.

Since Alexander started certifying Equal Exchange Chocolate for Passover two other things had changed. The Rabbinical Assembly included Equal Exchange chocolate in its giving stronger support and attention to the chocolate project. And then, the Rabbinical Assembly decided to allow eating of kitniyot, legumes, at Passover. This meant that the soy lecithin emulsifier sometimes used in chocolate could now be consumed at Passover, broadening the potential selection of chocolates eligible for consumption. (Alexander certifies only non-soy lecithin bars from Equal Exchange.)

While spokespeople for Equal Exchange admit that the company did not communicate well to the Jewish Fair Trade Project about the change in its formal fair trade certification, they also argue strongly and convincingly that they have not retreated on the human rights issues of chocolate. On the contrary, the worker owned co-op dropped its formal fair trade certification after much internal discussion because it determined that those formal certifiers had strayed from the original goals that Equal Exchange has valued since its founding in 1986. Indeed, its principles for equitable trade preceded the existence of any fair trade certification system in the States. Equal Exchange Chocolate Products Manager, Dary Goodrich, clarified to me in an email: “Equal Exchange continues to be an alternative trade organization with the heart of its mission focused on changing trade in ways that positively impact small scale farmers.”

Moreover, Goodrich argued, Equal Exchange currently only works with farmer coops that are certified by Fair Trade Labeling Organization (FLO), still abiding by the principles of fair trade and more. As Susan Sklar, Manager for the Interfaith Program partners of Equal Exchange, emphasized about FLO in an email: “We purchase all of our chocolate and cocoa from FLO certified cacao farmers; and we pay FLO a fee for certification… We choose not to put the Fair Trade U.S.A. or FLO seal on our chocolate products. However, if you look on the packaging of one of our chocolate bars you will see these words: ‘Fair Trade Ingredient: By weight 100% from fair trade cooperatives.’ ” Equal Exchange sees the new arrangement as more powerful than the previous one and its labels now read “Fairly Traded.”

Systemic and deep changes that eliminate poverty, child slavery, and hazardous child labor; while welcoming input from farmers,; investing in local economies,; and, creating community infrastructure, would be desirable in all cacao growing. The complicated economics of chocolate build on the very inexpensive labor of farmers who primarily live in impoverished regions. Commodity markets determine prices of beans, promoting competition among cacao growers to both sell product as well as achieve best prices. Industrial chocolate companies compete to keep prices down while meeting obligations to investors.

Given these complexities, some companies opt out of fair trade arrangements to pursue direct trade with farmers and some of those insist on formal third-party ethical certification for their direct trade. That status creates benefit socially and environmentally while also requiring transparency through a benefit report. Single origin chocolates which identify chocolate by region of cacao bean growing, help chocophiles bypass exploitation of children. Yet avoiding beans from particular locations undermines economic expansion in places such as Ghana and Ivory Coast.

Now we are left with at least four questions for this Passover:

Deborah R. Prinz lectures about chocolate and religions around the world. The second edition of her book, “On the Chocolate Trail: A Delicious Adventure Connecting Jews, Religions, History, Travel, Rituals and Recipes to the Magic of Cacao” was published in the fall of 2017. She wrote “A Haggadah for a Socially Responsible Chocolate Seder,” available for free download. She co-curated the exhibit “SemiteNew York City, now available to travel to your community.

The One And Only Kosher For Passover, Fairly Traded Chocolate