How Jewish Food Infiltrated The Mainstream 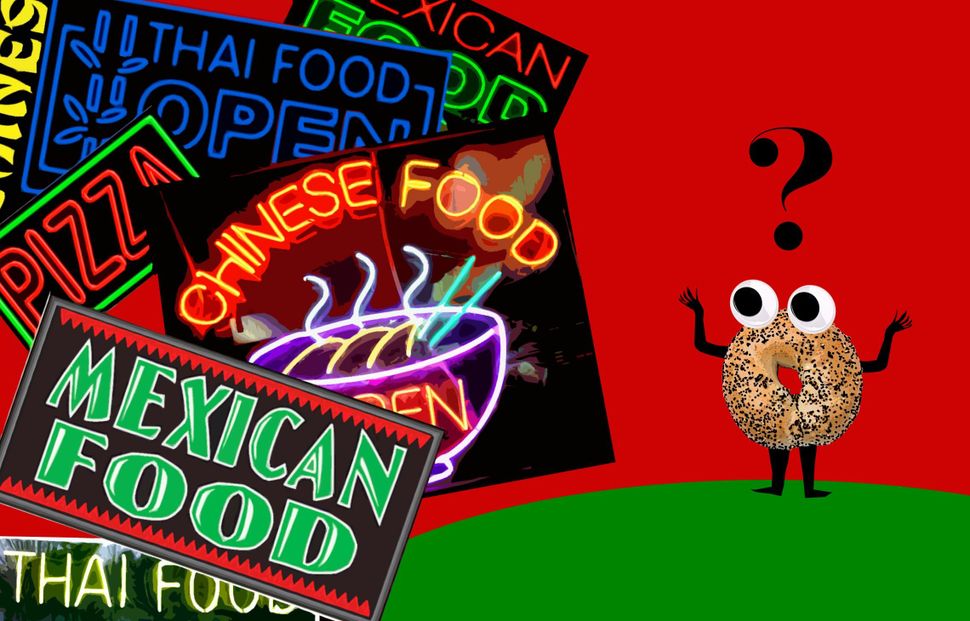 There’s a Chinese restaurant on every corner of New York City, followed in short order by a Mexican, Thai and Asian one. So why aren’t there more Jewish restaurants? Are there any foods that are indigenous to the Jewish people? Do the immigrant roots of Jewish food make it less appealing to the culinary avant garde? How, when and why did the perception of Jewish food change?

I sat down with Jayne Cohen, a renowned food writer and author of Jewish Holiday Cooking, to discuss why and how Jewish food took such a long time to happen.

Every cruisine is a cultural fusion, a cross between tradition and discovery, old and new, past and present. Without the Columbian Exchange there would be no tomato sauce, no gnocci, no spicy Indian curry, no lamb in Mexican food…but Jews do have some foods which are indigenous to only them. Cholent, which no other culture makes. Charoset. Matza. Matza balls.

Historically, Jewish cuisine was not critically panned, either. There’s an old Italian saying ‘dress like a turk, eat like a Jew.’ Pre-WWII Roma gypsies so loved one Jewish dish in particular, cabbage rolls with smoked geese, that they saw fit to augment it by adding a slab of bacon to the top so that it wouldn’t be kosher and therefore inedible for Jews.

So where did Jewish food’s terrible reputation in America stem from?

In the ’50s, processed food swept America. Everyone, Jews included, were enthralled by the new chemicalized ease of canned dishes. Blintzes were filled with canned cherry pie, TV dinners took the place of homemade dinners, and matza ball soup was replaced by canned tomato soup.

All the significant differences between different branches of regional Jewry, from Polish to Russian Jews to German Jews, got lost in the mix when cuisine became homogenized.

Sweet triumphed over savory. A complex, peppery gefilte fish was replaced by a sweet, innocuous tasting bland gefilte fish. People abandoned the complexity of spicy flavor in favor of the simplicity of sweet food that did not challenge the taste buds.

Then there was what Jayne Cohen calls the “aesthetics of Jewishness”: A certain sense that Jewishness was not beautiful or glamorous.

In the mid-’90s there was an exhibit in the Jewish Museum called Too Jewish, designed to challenge traditional identities. 4 Barbras, a silk screen project created by Deborah Kass, spoofing off of Andy Warhol’s 4 Jackies, received special attention. The artist had concentrated on Streisand’s nose. Museum-goers complained that she looked too Jewish.

It was in the days when many Jews and non-Jews considered saying “oh, you don’t look Jewish” as a compliment.

There was nothing sexy about being Jewish. The WASPs had relinquished their grip on the intellectual sphere long enough to let Jews trickle in, sure, but Judaism as glamorous, beautiful or cool? Certainly not.

For American Jewry, beauty and glamour were dissociated from Jewishness. Jewish art, clothes, and music was not beautiful or culturally relevant – and neither was Jewish food. Jews Americanized their names to sound WASPier (Bob Dylan being the most prominent example). Ralph Lauren invented his cowboy persona, a louche figure that was about as non-Jewish as people could be. There was The Preppy Handbook, written by Jews. There was Barbie, created by a Jewish inventor but famously called the “ultimate shiksa goddess,” by Rhonda Lieberman. There was Mark Rothko and Barnett Newman, Jewish painters who were encouraged by Jewish critics like Clement Greenberg and Harold Rosenberg to universalize their work.

But Jewish food wasn’t to languish in the darkness for long.

First there was the Civil Rights movement. Jews feeling discomfort in their Jewishness could watch as ethnic groups of all shapes and sizes embraced their roots. It led to a first wave of Jews re-examining their Judaism in a neutral light for the first time. The discomfort that first and second generation Jewish immigrants felt about their heritage was gone, replaced by the more benign curiosity and casual interest of the next generation. Assimilated, unaffiliated and disaffected Jews were reclaiming their roots and one big part of that was food.

Restaurants that were not necessarily Jewish or Jewish-owned starting featuring Jewish food on their menus. By the ‘90s, Wolfgang Puck in Los Angeles began having show-stopping seders, serving unprecedented items like gefilte fish poached with tarragon.

By the time the ‘70s rolled around, this gradual shift in public acceptance of Jewish food was nearing its peak. It was a phenomenon that saw challah emerge as ubiquitous in every East Coast bakery. In the Village in the year 2000, a small, now long-gone bistro called Merge served pork chops with a side of sweet potato tsimmes.

In the ‘80s, people began rediscovering the excitement of cooking. All the furor about processed food had died down, replaced by health concerns and stricter FDA regulations. People, Jews and non-Jews alike, were getting more comfortable in the kitchen again.

Globalization also played a part. As the world shrunk, everyone grew increasingly familiar with foreign cultures. Many recipes today require za’atar or sumac, once niche spices Americans were wholly unfamiliar with. People began traveling more, and the world began to shrink. A certain cultural familiarity was de rigueur in sophisticated circles.

Another sign of Jewish food invading the mainstream was its growing presence in mainstream food magazines. Publications like the late, great Gourmet, Bon Appetit and Saveur all now feature Passover and Chanuka recipes, a practice that started in the ‘90s.

Then the dam utterly burst, with the Israeli cooking boom, which changed the cultural landscape permanently. Yotam Ottolenghi published his seminal cookbook Jerusalem in 2012 and Israel became a culinary must-see. London now has Gefiltafest, an annual food festival dedicated to Jewish foods. London! Who would’ve thought?

As the secular world accepted Jewish food more and more fully, the kosher world sought to imitate the secular world. Faux foods were king. Bacon substitutes, or facon, reigned supreme. Imitation crab cakes were very on trend. Cheeseburgers made with soy cheese caused quite a stir, skirting the boundaries of acceptability. Faux ingredients were having a moment in the Orthodox world, and still are.

Tocqueveille, a French inspired restaurant, is run by Marco Moreira, who was married to a Jewish woman named Jo-Ann Makovitzky. He conceived of a fabulous culinary experiment, glazing the chicken in its own fat. “Marco, that’s shmaltz,” Joann exclaimed. Schmaltz was placed on the menu and the word, once reminiscent of the shtetl, had now been reclaimed by the American upper class Jews had once been afraid to utter the word in front of.

New Orleans boasted Shaya, an Israeli restaurant that is thriving in a city that is 95% Catholic. Domenicawas another New Orleans haute cruisine hotspot that hosted Passover seders.

Jewish food suddenly had an appeal that transcended its roots. Bagels and matzo balls were universal. Inventive seder menus were par for the course for any restaurant that wanted to stay culturally relevant. Jewish food was trendy, sexy, even glamorous.

The past thirty years have been a journey in American Jews’ self-acceptance, of re-examining our roots and of relearning exactly what it means to appreciate a bowl of chicken soup with noodles and matza balls on the side.

With special thanks to the brilliant Jayne Cohen.

Shira Feder is the Forward Food writer. You can reach her at feder@forward.com

How Jewish Food Infiltrated The Mainstream